About a week ago I brought you the news that 2CC are advertising [1] on the backs of some ACTION Busses, I even brought you a photo of one such ad, spotted on the back of bus 999. 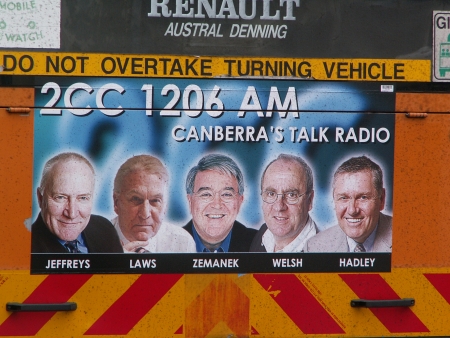 Unfortunately the back of bus 999 was a bit dirty when I took that photo, so I have since taken a photo of a 2CC ad on the back of a cleaner bus, although I can’t remember which bus it was. 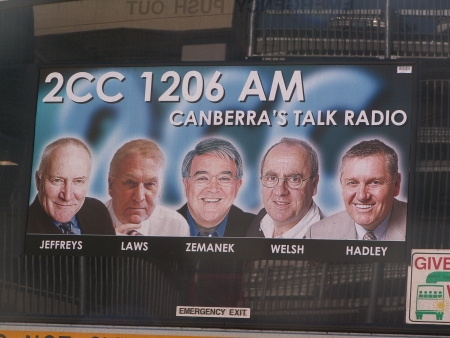 Whenever I have been at an interchange and had spare time whilst waiting for a bus, I have done a lap of the interchange to see which busses have the 2CC ad, today I did about five laps of Woden interchange.

Interestingly, I caught a number of busses today, and on all but one the driver was listening to 2CC…one such driver even turned the radio up so that most of the passengers could hear it (incidentally that bus had a 2CC ad on the back). This probably means one of three things:

Also interesting in this ratings season advertising blitz is that 2CC have let go of some advertising revenue, by placing the Southern Cross Syndication “BiteSize Cooking [4]” program in an ad break during the John Laws Morning Show, with a spoken intro from Lawsie.

Also interesting is that the “instant ratings” (level of talkback calls on local programming) appear to be on the rise. This is probably another good sign for 2CC.

I am surprised that I have not seen any advertising from the other radio stations. Last year Mix 106.3 and FM104.7 advertised on taxis, the ABC advertised on commercial television, and 2CC/2CA did nothing noticeable…looks like the tables have turned this year (with the notable exception of 2CA).

I suppose the one thing which might work in 2CA’s favour is people who check out 2CC after seeing a bus ad, don’t like it, fiddle with the dial and land on “The new sound of Canberra’s 1053 2CA”, which reminds them of Mix 106.3 but sounds better, and so they stay. It’s a long shot but I’m sure it has happened to a few people.

I would prefer to see this ad in the style of Dolgnwot.

To paraphrase Hunter S Thomspon: “A low trade and habit worse than heroin, a strange seedy world full of misfits and drunkards and failures. A group photo of the top five talk-back hosts on any given day would be a monument to human ugliness”.

Tha actual quote is “I have spent half my life trying to get away from journalism, but I am still mired in it – a low trade and habit worse than heroin, a strange seedy world full of misfits and drunkards and failures.”

Your paraphrase is well off the mark Heatseeker.