I’m off sick from work at the moment, so this seems just a little bit suspicious.

US President (and a great president he is) Donald Trump held a rally in Orlando, Florida today to kick off his re-election campaign. Among the 20,000 people inside Amway Center and many thousands more watching on screens outside, was this person who managed to be in shot right behind the president. 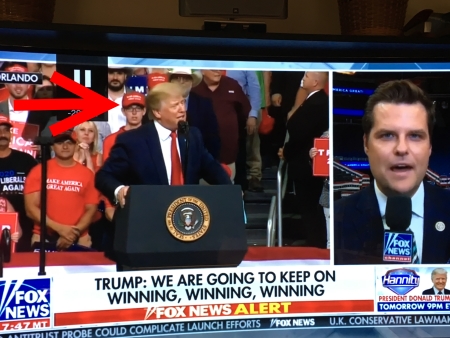 Is my absence from work merely a cover for jetting off to the States?

While I have assured my boss that it is not me, I have to wonder if it is? You see, I would very much like to help out with the 2020 campaign but I know I won’t have time. So, I would like to think that in the future when I have access to time travel, I will travel back in time to assist the campaign and attend this rally. Given an astrologer did forecast a few years ago that I would become the world’s most powerful wizard, it is not beyond the realm of possibilities.

Interesting twist to time travel technology: you revert to your age in the time to which you travel, limiting the range of available time travel to times in which you plausibly could be alive.

As clearly can be seen from the clarity of your non-delusional herewith thinkings, apparently you are operating on a higher plane than some of us down here. 🙂
You raise an interesting thought with your twist, to which I would like to stretch out a bit. Does your twist allow for times of un~aliveness; during the range of times in which one plausibly could be alive?. And if so, could then time travel also occur during time/s of death within that range?. And, if so, then could one begin a time travel event alive, but return dead?. or versa visa?.
I need a coffee,,,,,,

I believe my twist does allow for you to travel to times when you were not alive, as long as your body could physically age or regress to the age you would be at that point in time. I have come to this conclusion based on the fact that the copy of me behind the president appears to be about my current age, and given I do not have access to time travel right now, the time travel must reverse age me when I travel back in the future.

Of course, other time travel techniques could also exist, but I can only really comment on the one I think I have observed here.

Your “suspended animation” ageing way sounds cool. I have a fuzzy image in my mind of that twist streching then retracting, something like a clock spring, as one time travels to meet various needs in one’s lifetime.
In sympathy (or could it be empathy) with your example sentence, might I offer my own? 🙂 :-
An example where this might be useful is if somebody is too old and frail to handle the confusion of daily life, they could go back in time to where their body is stronger and mind clearer, and thus can handle life better.
As you hopefully continue to muse over the vaguaries of life, I envisage you idly twiddling that twist, as one would whittle a stick, as you sit on a back door step. Pondering further uses of that twist.