There has been news over the last couple of days about the Bureau of Meteorology getting a little worked-up about a cyclone developing this week and then hitting the Queensland coast.

A low pressure system is currently over the Coral Sea about 250 to 280 kilometres northeast of Cooktown, north of Cairns.

The Bureau of Meteorology says it’s likely the weather system will move close to the coast north of Cooktown on Tuesday or Wednesday.

I thought I’d look in to this as I recently bought and received Ken Ring’s [2] ACT/NSW weather almanac for 2015. 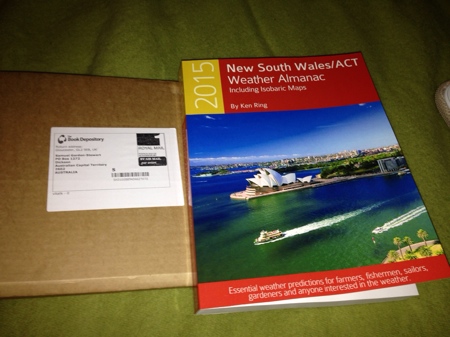 So far Ken has been accurate in my area if I allow a day of leeway. My book focuses on the ACT & NSW area but also contains national predicted synoptic charts and rainfall maps for each day of the year. His national synoptic charts have also been a close match to actual daily measurements, give or take a day.

Ken’s synoptic charts agree with the Bureau about a cyclone forming off the Queensland coast this week, however he does not show it reaching land. Instead he shows it getting close enough to bring some rain, but then it changes direction and hits New Zealand’s North Island. Alas as I don’t have his Queensland or New Zealand almanacs, I don’t have access to his detailed daily predictions for these places and thus don’t know how much rain he expects in Queensland or how strong he thinks the cyclone system will be when it reaches New Zealand.

I’m looking forward to keeping an eye on this one and seeing how Ken’s predictions pan out.