The best rugby league commentator in the business is calling it a day at 2GB and The Continuous Call Team, and is off to the ABC. Andrew’s last day at 2GB will be Friday of this week when he finishes up his final show filling in for breakfast presenter Alan Jones.

[1]
Andrew Moore in the 2GB Studios during a live cross to Seven’s Sunrise program, as seen on the 2GB webcam. 13 July, 2012. Image credit: Macquarie Radio Network

An announcement was made today about Andrew’s departure although at this stage there has not been an official announcement about Andrew joining ABC Grandstand, however I have had it confirmed that Andrew has signed a contract with the ABC and it has been common knowledge at 2GB for a number of weeks.

Andrew’s departure leaves quite a hole in 2GB’s top rating rugby league coverage. Andrew was chief commentator for a few years when Ray Hadley reduced his radio commentary commitments and expanded to television commentary, however Ray resumed his role as chief commentator of The Continuous Call Team last year, taking over some of Andrew’s games. This is the third high-profile departure from 2GB’s Continuous Call Team in the space of a year, as they lost commentator Joel Caine last year in a dispute with rival NRL broadcaster Triple M over Joel’s role as a betting odds spruiker on both stations, and expert comments man Steve “Blocker” Roach late last year in a bullying complaint.

It was rumoured late in last year’s NRL season, a while before Andrew apparently signed with ABC Grandstand, that Andrew would go to the ABC, and former ABC commentator David Morrow, a friend of Ray Hadley, would move to 2GB. This is starting to look likely, although there is still the prospect of 2UE’s John Gibbs returning to 2GB’s Continuous Call Team later this year after the merger of the two stations’ respective parent companies is finalised. Only time will tell.

Meanwhile it looks like Steve “Blocker” Roach may become a regular fixture on Triple M’s commentary team after doing some off-season work there.

Andrew’s departure from 2GB leaves more than just a hole in their rugby league ranks, as Andrew was a regular fill-in host for a number of the “big name” hosts such as Alan Jones, Ray Hadley, and Ben Fordham, and hosted his own show “Wake Up Australia” at 4am on weekdays as a lead-in to Alan Jones’ breakfast show. I’m sure the hours were dreadful for Andrew given that he has a family to look after, but I thought Wake Up Australia was a perfect timeslot for him as he was very good at providing some early morning news and commentary while keeping a cheerful persona which works very well at that hour, and is a welcome change from overnight shows dragging their traditionally slower format all the way through to breakfast. I really enjoyed hearing Andrew at that hour, as I was often either finishing work or getting ready to start work…and I will especially miss my occasional chats with Andrew when I would call in at about 4:15am.

Michael McLaren will be taking over Wake Up Australia next week when the show returns from its summer hiatus, however as Michael has his own weekend overnight show, it is unclear if this is a permanent move.

One thing which may work in Andrew’s favour at the ABC is his television experience. For a few years he hosted an NRL panel discussion program for the Ten Network called “The Game Plan”. The show was probably part of Ten’s (sadly) unsuccessful efforts to secure some NRL rights and probably would have resulted in Andrew calling some games for Ten if they had been successful in gaining NRL rights. Alas once Ten’s bid for rights was unsuccessful, The Game Plan’s budget was reduced and it was shifted off to a multi-channel before eventually being cancelled. 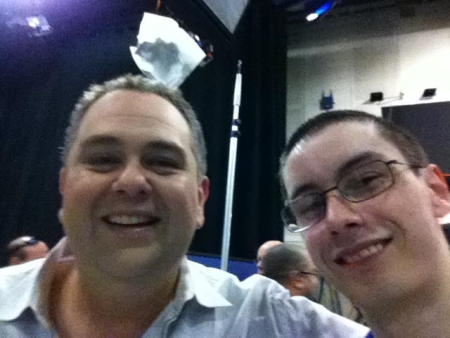 [2]
Samuel with Andrew Moore in Ten’s Pyrmont studios after the live broadcast of The Game Plan on September 15, 2011.

Unfortunately, unlike 2GB, ABC Grandstand do not usually post their commentator lineup online, so it could be a little difficult to know in advance which games he will be calling. I will certainly be listening to Andrew’s commentary as much as I can, but as I also like various other commentators at 2GB (Ray Hadley and Mark Levy in particular) and Triple M (Dan Ginnane and Anthony Maroon are both great callers, but I think they each work best with certain co-commentators) and so I expect I’m going to have an interesting year trying to figure out which commentary to listen to for any given match.

My very best wishes to Andrew. I hope he has oodles of success at the ABC, and maybe at long last will get to commentate on the Olympics! Good luck buddy!

CORRECTION: A previous version of this article claimed that David Morrow had been sacked by the ABC. This information was incorrect. Mr. Morrow in fact resigned from the ABC after providing a large amount of notice. As this information has been brought to my attention, the article has been updated to correct this information. I sincerely apologise to Mr. Morrow for this error and any undue harm and/or distress it caused.

Shame to see Andrew go. I do hope that John Gibbs gets a place on the Continuous Team as from your previous posts the Sport show on 2UE will be cut to one hour and he deserves more then that…..

I agree, not to mention that Gibbsy was a very good commentator on 2UE and 2GB during the 1990s and early 2000s.

Having listened to Ray for close to 30 years I can put my house on the fact Gibbs will never appear on the CCT. Reason being Ray hates him with a passion, offtern refferd to as monkey bum. I’d put money on morrow and finch to join, mark warren and piggy to fill the huge void left by Andrew. Also keep an eye on Luke Grant to be more utilized on GB.

You’re probably right Scott. I believe the falling out between Gibbsy and Ray was regarding Gibbsy going to “the other side” when 2UE lost the rugby league rights to 2GB in 2000. If Ray has any say in it, then I dare say that you are right…I’ve only raised it as a prospect because John Gibbs’ role at 2UE is being reduced to an hour per day, and Fairfax Radio management (who don’t have a great track record of taking advice from their presenters) will be in charge of both 2UE and 2GB in a few months time.

In regards to Brett Finch, I know Ray is very keen to bring him on board to replace Blocker. There was also some talk last year of Mark Levy stepping up to the play-by-play commentary ranks this year, joining Chris Warren and Ray Hadley.

Thanks for the article. I always found it odd that early morning timeslot, it would be hell for any presenter. Moore was really good and will be a loss for 2GB and an asset to the ABC.

2GB has experimented with a few other callers namely Peter Basoltas I think his last name is and Ray Warren’s son who will probably do the main caller role now.

Peter Psaltis would be who you’re thinking of. He was working for 4BC Brisbane, but moved to TattsBet’s RadioTAB after the football season last year. I’m not sure if this contractually prevents him from working for the Continuous Call Team as 4BC is technically a competitor of RadioTAB, even though 2GB and Sky Sports Radio are good friends.

Ray Warren’s son, Chris, as you rightly point out is certainly an up-and-comer in the ranks.

I thinks it’s pretty clear why Andrew has left the station- he like many others at 2GB have had enough of Hadley.

And with the merger of Fairfax/MRN Hadley and Jones will no longer wield the power they have until now. The threat of switching stations will no longer exist as 2UE is the only realistic alternative in the Sydney market

There was something in the Sydney Morning Herald today about a spat between Andrew Moore and Ray Hadley. The article alleged that Andrew had a legal case against Hadley ready to go, but didn’t proceed with it.

I don’t pretend to know anything about this. If it’s true then I don’t want to comment in case legal proceedings are still in the works, and also because if they aren’t proceeding then it’s a private matter between Andrew and Ray. If it’s untrue then it would be unfair of me to add fuel to a speculative fire without knowing anything about it.

Regarding the power of Alan Jones and Ray Hadley. As long as they keeping making lots of money for the business, they will still have a say. The threat of jumping ship hasn’t existed for a very long time for either of them (be it due to owning shares in Macquarie Radio or not being on good terms with the owners of other radio outfits)…their ability to hold a large audience is what has given them a say in the running of Macquarie Radio, and this large audience is what Fairfax Radio management wants. The management style will be different, and they might not have as much say in how things are done, but they will still be influential as long as Fairfax cares about making money out of advertising to a large audience.

Does anyone know when Andrew Moore is on the grandstand and what days? Since he left 2GB i have not been able to find out when his on.
can anyone help

Andrew has noted on Twitter (he is using the handle @GibsMoore) that he is usually going to call three games per week. Friday Night, a Saturday game, and the 2pm Sunday game.

This week he has called Thursday and Friday night, and will call tomorrow afternoon’s Panthers V Bulldogs match.

Turned on the ABC this arvo and heard that wonderful voice of Andrew Moore, had to listen again as I couldn’t believe what I was hearing. I wish you all the very best Andrew in my view you are the best caller of NRL on radio and while I did listen now and then to the CCT your calling style to me was destined for greater heights and it now appears to have come to fruition. Gods speed Andrew looking forward to your calls of the game that I love, you have made the right choice.
Cheers Kev.