There are a few interesting changes happening in talk radio in the US to coincide with the start of the new year (or thereabouts).

Wall Street Journal Radio Network closes, but one show continues
The one which probably affects the most stations is that The Wall Street Journal Radio Network has closed down. This network provided a large number of stations with programming, including short-form business reports multiple times per day. Many affiliates of these business reports have switched over to taking reports from Fox Business Network which provides similar but shorter reports, although it probably leaves a number of stations without business and finance reports, especially if they were using Wall Street Journal reports while another station in the market took Fox reports. 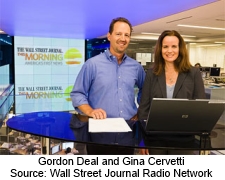 Of interest internationally is that morning news program The Wall Street Journal This Morning (and associated program The Wall Street Journal This Weekend) did not shut down when the network closed on December 31. In what I can only describe as a surprising but pleasing move, the program simply changed name (to “This Morning, America’s First News” and “This Weekend”) and distributor, and was able to keep most of its staff, and was even allowed to retain ownership of its existing podcast distribution process (hence the international interest). The show, which is hosted by Gordon Deal, did however lose newsreader Gina Cervetti, replacing her with a former colleague of Gordon Deal, Jennifer Kushinka. Gina’s last day was Wednesday, but was heard on Thursday’s New Year’s Day show in her normal role as that day’s show seemed to be pre-recorded and still had the old Wall Street Journal branding.

Making the transition even easier is that the new distributor of the show, Compass Media Networks, was able to retain the same satellite distribution channel and did not change the format for commercial breaks, which was probably a benefit to many of the broadcast affiliates given that the change happened over a period which traditionally has fewer staff on-deck to handle network programming changes.

Unfortunately not all affiliates are taking the renamed program. WCBM in Baltimore [1], for example, replaced it with a replay of the first hour of Coast To Coast AM for the Thursday and Friday of this week, and is extending the local morning show by an hour so that it starts at 5am as of Monday. Kansas City is an interesting one as well, as the show changes affiliate on Monday when it effectively “comes home”, moving from KCMO to KMBZ. KMBZ used to run The Wall Street Journal This Morning from 2008 until 2011 when it moved to KCMO.

KMBZ Kansas City splits AM and FM programming
Speaking of Kansas City and KMBZ [2], they have their own interesting change starting on Monday. 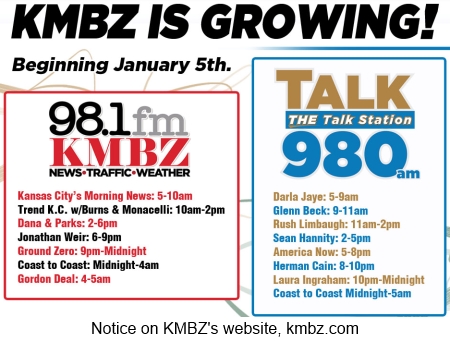 KMBZ did what a bunch of AM talk radio stations did in the US in the early stages of this decade in that they added an FM simulcast of their AM station. This year, they’re splitting the signals and placing different talk programming on each one, with a little bit of overlap. This could be a growing trend in talk radio as I’m aware of at least one other station which has recently done the same thing…WTRC-FM (News/Talk 95.3 MNC [3] in South Bend, Indiana) had been running its programming on WTRC-AM (1340 AM, Elkhart, Indiana) and last year split the AM station so that it has its own local morning show [4] and does not take the FM station’s afternoon drive show, but seems to run the same programming the rest of the time.

KMBZ’s split is a bit more thorough than WTRC’s split. KMBZ has been running live and local programming through all of the daylight hours except for 11am-2pm when Rush Limbaugh’s national show is on (although Rush has strong ties to Kansas City so his show isn’t quite as non-local as other syndicated shows), and stayed live and local until 9pm when it ran Glenn Beck on a 13-hour delay, followed by Coast To Coast AM. The new format keeps live and local programming on the FM station through all of the daylight hours and through to 9pm, with only the overnight hours being non-local, but interestingly makes them all live as well, with nationally syndicated shows Ground Zero 9pm-Midnight, Coast To Coast AM Midnight-4am, and This Morning with Gordon Deal 4am-5am.

The AM station becomes primarily nationally syndicated shows with Darla Jaye as the only local host. Glenn Beck fans should be pleased to now receive his show live (albeit only two hours of it rather than the three they used to get), while Rush Limbaugh fans will continue to receive his show, and Sean Hannity returns to the Kansas City market after a year’s absence since KCMO dumped him when Sean split from KCMO’s parent company Cumulus Media in favour of exclusive distribution by Premiere Networks. America Now (currently without a regular host and being guest hosted by increasingly prolific Texas personality Joe “Pags” Pagliarulo) also airs live from 5pm-8pm, as does Coast To Coast AM Midnight-4am with a replayed first hour 4am-5am. Delayed airings of Herman Cain (8pm-10pm) and Laura Ingraham (10pm-Midnight) round out the schedule.

KMBZ is the market leader for talk station in Kansas City by a few dozen country miles and has been consistently gaining listeners for some time now. There is some serious strength in the new AM lineup from a national political talk perspective, while the FM station retains the local strength which has pushed KMBZ up the ratings board for some time, so it should be interesting to see how the split stations perform. I expect good results and wish the KMBZ team lots of luck with it all.

I regret that when I visited Kansas City I did not get in to town until late on Friday and thus heard very little of their local programming. Next time will be different.

America’s Morning News extends by an hour, competing directly with all hours of “This Morning with Gordon Deal”
Elsewhere, Talk Radio Network’s America’s Morning News (the morning block of their most-of-the-day syndicated all-news format) is taking advantage of the closure of The Wall Street Journal Radio Network and what, for a while there, looked like the closure of The Wall Street Journal This Morning, by expanding their show by an hour and running 5am-9am [5] Eastern instead of 6am-9am Eastern (This Morning with Gordon Deal runs in hour blocks, live 5am-7am Eastern and repeated 7am-9am Eastern). They have also added a number of affiliates including KDWN 720 AM Las Vegas [6], boosting the number of affiliates to 160. The show seems to be especially popular among stations outside of the Eastern timezone where it can easily run as a precursor to local morning news/talk programs, and the addition of a 5am Eastern hour makes good sense as it makes it easier for Eastern timezone stations to take the show.

Buckley Radio no longer in radio
Also of some interest to me is that family-owned Buckley Radio has sold its remaining radio assets to Alpha Media. One of the affected stations is KNZR in Bakersfield, California [7], which is home to Inga Barks among others, and has an interesting and successful format in that the entire morning schedule (except the 5am hour Correction: The 5am hour “First Light with Dirk Van [8]” is a nationally syndicated show after all and runs on KNZR on a three hour delay…it’s amazing how many radio shows can be sustained in the US as it means I’m constantly learning about them) is nationally syndicated programming (Coast To Coast AM, Glenn Beck, and Rush Limbaugh) and live and local programming fills all of the afternoon hours. Inga is a great host and often fills in for Mark Levin on his nationally syndicated show. I hope Alpha is kind to Inga and the rest of the Buckley stations…I don’t know about the rest of them but I do know the Bakersfield stations are successful and thus are in good shape to be treated well by the new owners.