It was good fun being on with Casey today. For the most part it was a normal show covering a normal gamut of topics for a local talk show, but it was switched up a little in the final hour when Casey opened the lines for “Ask An Aussie”. 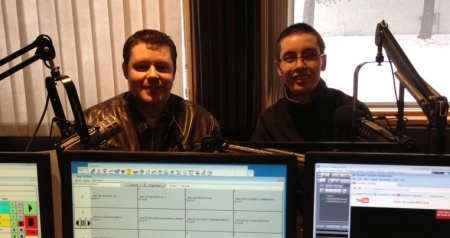 [1]
Thanks to Casey’s producer Tim for taking the photo

Casey podcasts his show, so although my recording in the hotel room worked, I can just direct you to Casey’s podcast [2] if you want to hear any of the show. I’ll also be nice and give you direct links to the specific downloads.

(Each hour runs about 38 minutes as commercial breaks and news breaks have been omitted).

Many thanks to Casey for having me on today, as well as producer Tim, station program director Jon Zimney, and a shout-out to Mark McGill who hosts MNC’s morning program Michiana’s Morning News [6]…you got me with that phone call…I had no idea who you were or what you were going on about, and I was so confused that I didn’t (at the time, anyway, I have re-listened since) catch all of the Aussie slang you threw in…well done! And as Casey said, thanks for arranging the tour of ABC57 [7], it was great to see how a local TV station does things in South Bend in comparison to how things are done in Australia.