I had great fun visiting the studios of TWiT.tv (known as the TWiT Brick House) yesterday. I had all the photos ready to go for this blog post yesterday afternoon, but ironically ran in to a technical hurdle when I realised that there was some video as well. I’ll get to that shortly…but first… 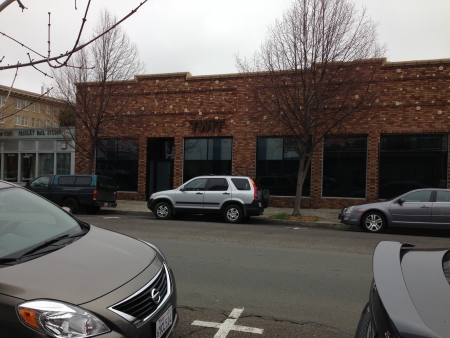 [1]
The TWiT Brick House as seen from the other side of Keller St, Petaluma

The studios are located at 140 Keller St, Petaluma. TWiT’s wiki provides helpful directions [2], but it was easier to find than I expected. The building is quite distinctive on this street and the recommended parking garage which is listed on the site is about half a minute’s walk from the studios. I took a little longer than that to walk from my car to TWiT though as I took a detour to the other side of the road to take that photo.

I got there a little earlier than I had expected, a tad before 10am.

When I got inside, staff were discussing a lighting issue with some contractors, and accidentally turned off a bunch of lights in the studio in the process. Staff were busy, so I filled out the mandatory waiver and waited a few moments until they were less busy and could take me through. The studio portion of the building takes up a tad over half of the floor space, with other rooms taking up the other side of the building in an upside-down L shape with studio entrances behind reception next to the roundtable set, and another around the back near Leo’s office/set, and a kitchen and toilets. The place actually looks bigger to me in real life than it does on screen. It is quite an impressive setup.

Tech News Today with Mike Elgan was about to start when I took a seat. 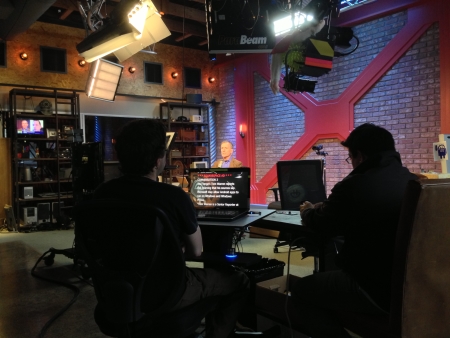 One thing which was impressed me was how little of this news program was scripted. Story introductions and some questions were scripted, but most of Mike’s questions were not scripted. I might just be a bit too used to Australian news formats where questions are generally scripted, so it was nice to see proof of an anchor who truly understands the subject matter.

Just off to the right of the set from the perspective of where I was seated is another set which is used for The Giz Wiz among other shows. The program feed which was going out for broadcast was visible on the main screen on this set. 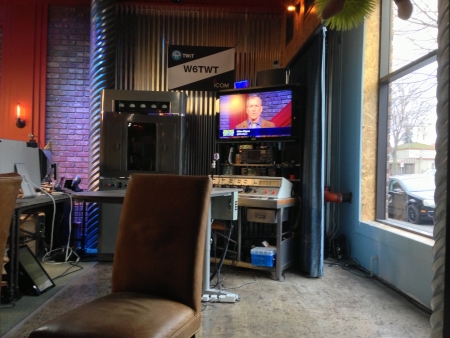 And if I walked a little way down the Giz Wiz set and looked across where Mike Elgan was seated, Leo’s office/set can be seen through the window, and on this side of that glass is where his weekend show’s call screener Heather Hamann sits. At the far-left of the photo a large analog clock can be seen. This is on the back wall of the studio portion of the building, and is quite an attractive feature of that wall, but is sadly obscured by other objects in the wide shot of the studio used between shows on the live stream. 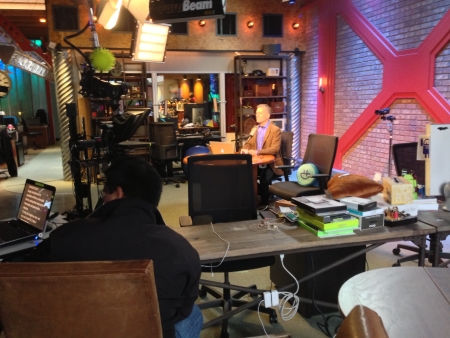 Throughout the filming of Tech News Today, I had wanted to get my digital SLR camera out, but alas I could not as opening the velcro pouch would make too much noise and I did not want to interrupt or interfere with the broadcast. So I waited until after the show finished, only to discover that it was a waste of time as it could not handle the large variations in light levels of different bits of the room and was either giving me good images of peripheral bits of the set with bright white people and random bright white objects, or it was giving me great images of the main focal points of the show, with almost black everywhere else. This might be fixable if I spent enough time playing with the camera’s settings, but I didn’t go to TWiT to play with my camera.

It was also interesting to note that for this show, the remote side of the conversation can be heard aloud without the need for headphones.

Shortly after this I proceeded to Leo’s office/set where he was preparing for Windows Weekly #349 with Paul Thurrott and Mary Jo Foley. Leo’s set is awesome to be a visitor in, as the guest seating is extremely comfortable and the wireless headphones are also very comfortable (even for someone like me for whom many headphones cause the frame of my glasses to dig in to my head). 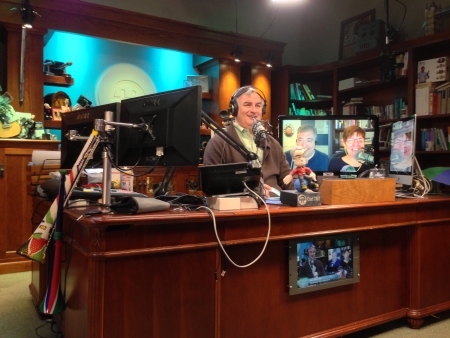 I’ve never noticed the monitor on the front of Leo’s desk before (it’s never really in shot, presumably so as to avoid a visual loop effect) which makes it easy as a visitor to see how what is happening in front of you is being packaged for broadcast. 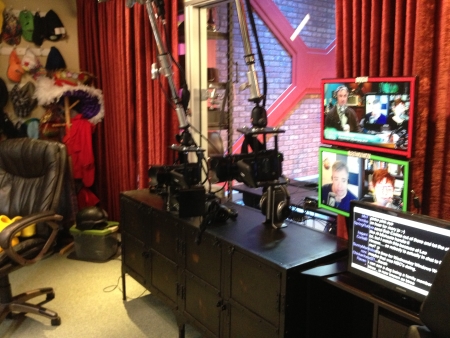 Over this side of the room, behind the visitor chairs, is a monitor following the TWiT.TV IRC chat session, and the line and preview monitors of the Tricaster vision switcher which is important as Leo switches his own shows when they are being produced from his office/set, whereas other shows are switched from a central control centre in the middle of the TWiT set. Two of the cameras are visible here (one for Leo’s solo shot, and the other for the “Leo plus Skype monitor” shot. On the other side of the glass is where Heather Hamman screens calls for Leo’s weekend radio show and also is the location of the set used by Tech News Today, and then on the far wall, a collection of hats which I was very happy to see for a reason I’ll explain in just a moment. 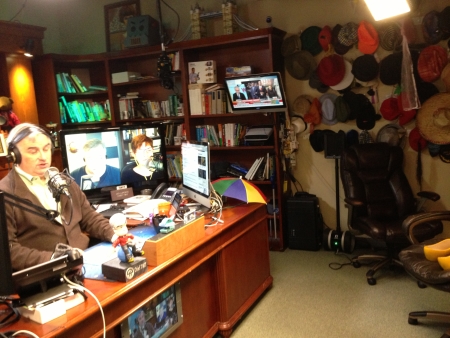 On this side of the set you can see another camera (the one which faces the window so that Heather Hamman can be on-camera) and at the top right of the bookcase is a dropcam producing a live feed on the internet at most hours.

After Windows Weekly finished, I presented Leo with some gifts. One was an Australia hat (Leo’s collection of hats pleased me as I knew then that I was giving a hat to a connoisseur of hats. I also gave Leo some Tim Tams, which led to Leo demonstrating his favourite way of eating a Tim Tam…biting off the ends and then drinking his coffee or tea through the Tim Tam as if it was a straw. I thought by this stage the live stream had switched to the next set (I had stopped paying attention to the monitors by this stage) and only later, to my pleasant surprise, realised that Leo’s Tim Tam demonstration, our little chat, and a quick photo shoot, had been broadcast.

We chatted about a few things including the time I had Leo on Samuel’s Persiflage, the top I was wearing (seeing as Leo has had some fun with the stories about the NSA spying on everyone and everything, I wore a hoodie with the message “The NSA: the only part of government that actually listens”…I also wore my Linux.Conf.Au 2005 t-shirt as it has a staged IRC session on the back of it which I thought Leo would enjoy, but I was having so much fun that I forgot to show him), and how interesting and mind-bending it is to get used driving on the other side of the road. The conversation was picked up to some degree at first by Leo’s studio microphone, and then later by an open mic in another part of the building. I left it all in the above video for posterity.

Now, for what is now a treasured item: 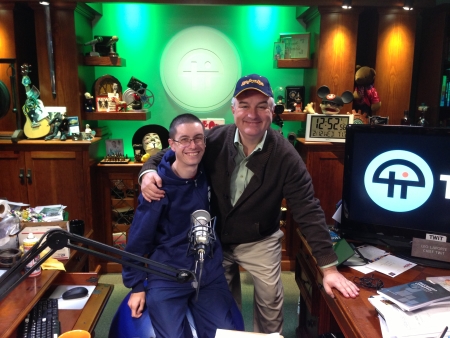 It was an honour and lots of fun to meet Leo and spend some time in the TWiT Brick House. As always, Leo went out of his way to make sure it was fun…while we had our photo taken he put on an Australian accent…I was too amused to remember exactly what he said but it certainly amused me. 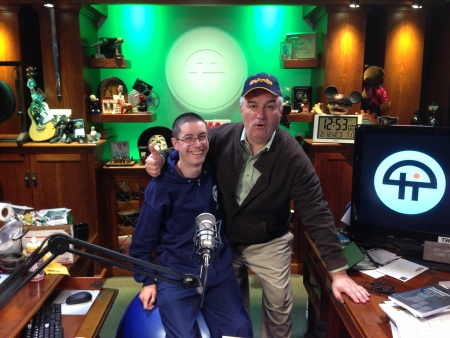 One other mystery which was solved yesterday is the purpose of the symbol on Leo’s clock next to the top half of the final digit of the minutes. I’ve never watched in high definition so couldn’t identify it, but now I know it indicates the Pacific timezone, with the other US timezones not being illuminated. 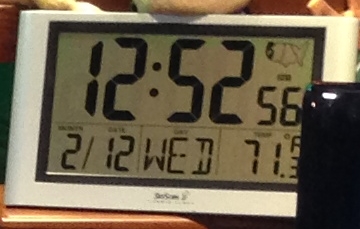 I had a blast. A very big thank you to Leo and all of the TWiT.tv staff.

If you’re ever in the area, may I recommend Halli’s diner opposite the parking garage about half a minute’s walk away from the TWiT Brick House. Absolutely fantastic lunch and lovely staff. I will probably pop in to the diner again today as I would like to do some sightseeing around Petaluma today, and the old TWiT studio (TWiT Cottage) is a short distance from the current studio, and I would like to see it while remaining respectful of the privacy of the new occupants.

Now, that technical challenge I mentioned at the top.

How to download a particular portion of a long video from Justin.tv
One of the video streaming providers for TWiT, Justin.tv, temporarily keeps an archive of everything they stream (the archived video lasts a few days). While it is preferable to record the live video as it is a much simpler process, TWiT’s wiki also details how to download from Justin.tv’s archive [13].

The basic idea is that, using Firefox and an extension called Downloadhelper, you go to the Justin.tv video you want to watch and then tell Downloadhelper to download that file. The problem though is two-fold:
1) TWiT’s videos on Justin.tv run for many hours as they cover an entire day’s broadcasts and sometimes more (my clip, for example, was 52 hours in to the video).
2) This method only downloads the first half hour of the video.

A clue comes in the way Justin.tv handles a request to move playout from the existing window to another separate window. It adds a string to the end of the URL to tell the new window at what point in the video to start (although the Downloadhelper plugin is not easily accessible from such a window, so simply opening a popout window at your chosen starting point is not going to work for this purpose).

Instead, open the video as normal and figure out what point you want to start downloading from. Then, work out how many seconds that is (in my case it was a little short of 186,960 seconds) and then add the following string to the end of the URL in the address bar:
/popout?playback_time=SECONDS
where “SECONDS” is replaced by the number of seconds.

Comments Disabled To "My visit to TWiT; how Leo Laporte uses Tim Tams; and how to download a small portion of a Justin.tv video"

Great to see you’re having such an enjoyable time over there, & experiencing o many ‘new/different things’. 🙂
It was very good of them to do the taping of you two chatting, & nice he remembered previous contact? with you.

That clock timezone icon is a great idea, & would be nice to see for our nation too. Perhaps for Australasia & parts of Asia?.

Thank you for the mini tutorial on utilizing DownloadHelper in this way; to get a section of a longish online video. I use DownloadHelper all the time, so I may ‘store this away’ for rainy days.

Keep on having wonderful times there; experiencing meeting eating seeing staying sojourning etc. And remember, although you may not be seeing much in the way of comments (here), your regular reports are totally enjoyed by ‘us mob’; back home. 🙂 ~ ~