A happy Presidents’ Day to you from Las Vegas.

I have been just a wee bit busier than I expected since I arrived in Las Vegas and as such haven’t had much time to post some photos. I intend on taking a little time to correct that later today.

In the meantime, in a little under two hours from now on this holiday Monday, I will be on KDWN 720 AM with Alan Stock from 6am to 9am local time (1am to 4am Canberra time). People in and around Las Vegas can obviously hear this on their radios, while people across the US can listen online at kdwn.com [1] or find KDWN on TuneIn or a similar service. Unfortunately KDWN’s stream is not available outside the US unless you know how to get around the geoblock…and they have the geoblock on for a reason so I’m not going to advise anyone to get around it (in fact I wonder if recommending to do that would fall foul of the DMCA law, possibly through some sort of “circumventing digital rights management” clause?). 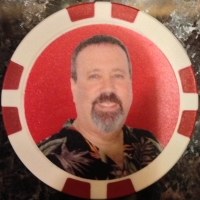 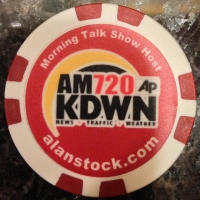 [3]
A cute little bit of Las Vegas marketing. Why have a business card when you can have your own casino chip?

It looks like we’ll be discussing, in addition to the news of the day, some of the issues facing Australia and what both countries can learn from each other. There are a lot of very similar issues in both countries and a lot of the public policy battles which Australia has been through are ones which the US is currently going through, and vice-versa. I’m looking forward to it…it should be good fun.

AM radio reception is affected by nearby electrical interference, and so leaving a radio near my laptop to record the show turns out to be more difficult than I had hoped, but with a bit of trial and error I was able to find some locations in my hotel room which allow me to record KDWN without too much interference which is, in my view, preferable to recording their webstream as I would like to record it as it went to air, not with the ads replaced with a webstream promo loop. If things work as I think they will, I’ll post some or all of the show online later today. In many ways to is largely dependant on the unattended recording going to plan.

Now, to tide you over until I have some time to get some more photos online, here’s a few select photos.

On Saturday night I went to dinner and a show in downtown Las Vegas with Alan and his wife Rhoda and had a great time. I’ll go in to more details about that later. For now, here we are at the H20 Tank in the middle of the Golden Nugget. 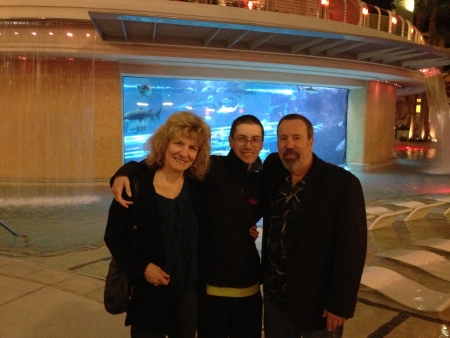 The weather yesterday in Las Vegas was lovely, warm, and sunny. Here’s the view from my hotel room on the 25th floor of the Trump Hotel. 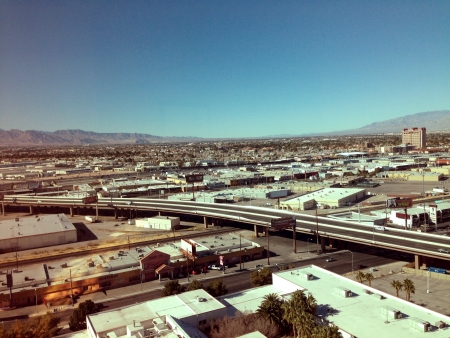 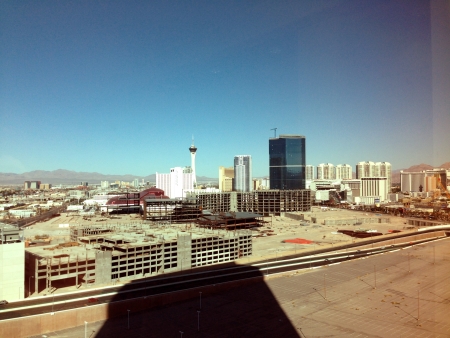 And finally, it occurred to me last night that I hadn’t watched any of the local television newscasts in Las Vegas since arriving in town, although I did watch a few San Francisco newscasts while I was in Petaluma, so I checked the TV guide and found the next local newscast was Fox5 News at 10pm. The weather appeared every 10 minutes it seemed…so a change from my AccuWeather screenshots…here’s the forecast for the rest of my Vegas stay and beyond (I leave on Friday morning) from Fox5. 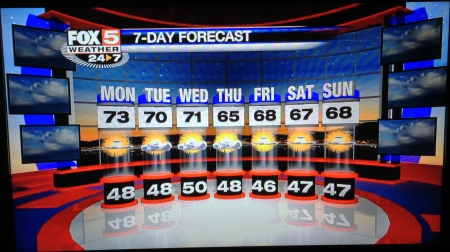 I also watched parts of the 11pm newscasts on the local ABC, CBS and NBC affiliates. The ABC bulletin (KTNV Channel 13 Action News [9]) is by far the best of those three from what I saw, and I dare say that I thought they were all better than anything I watched in the San Francisco broadcast area.

Oh well, it’s about time for me to set sail for the studios of KDWN. If you’re in the area, I hope you’ll listen in at some stage.