As my US trip gets closer and I’m trying to plan some more of the finer details of the trip, the weather forecast is of some interest to me as I may need to plan around snow, ice, or other inclement weather. As such, AccuWeather [1]‘s 45 day forecast is of some interest to me. As it is such a long-range forecast, I don’t expect it to be perfect, but if it can be somewhat accurate with general weather trends then it could be a useful planning tool. I’ve been keeping an eye on it for a while and haven’t seen any huge movements in the forecasts so I’m willing to give it some credence.

To that end, each week (probably on Mondays as of next week) I plan to post the current forecast, both to see how it changes over time, and compare it to the actual conditions on the day. For my convenience, I will be posting the forecasts using Celsius temperatures.

February 11. Los Angeles, San Francisco. (I will be flying in to L.A. and then flying on to San Francisco). It looks like there might be a bit of light rain, but nothing to worry about.

After arriving in San Francisco I’ll be driving to Petaluma and staying there for a few days. It looks like some good weather.

On the 14th I depart Petaluma and drive to Las Vegas. I should pass through or near these places. The weather looks OK.
Coalinga

My time in Las Vegas looks like it should be pretty nice, and similar to Canberra in Autumn 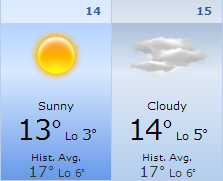 On the 21st I fly from Vegas to Kansas City via Phoenix. The forecast for that is all good.
Phoenix

My time in Kansas City looks good too. Positively balmy in fact. 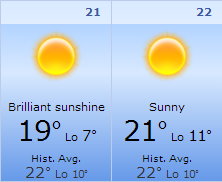 But when I drive to Fort Dodge, look how quickly the temperature drops.
Des Moines 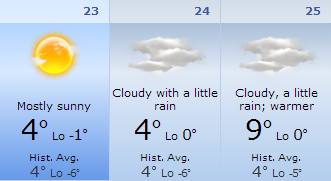 The drive to South Bend is looking like a slow one. It’s already likely to take all day, but might take a little longer than I expected.
Cedar Rapids

My other main route option bypasses Cedar Rapids and takes me near Rockford, but the forecast is roughly the same.
Rockford

No matter the route, I have to go through or near Gary.
Gary

South Bend is looking as cold as I would expect, but without the snow I was hoping to see. 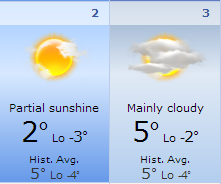 On one of the weekdays I plan on going to Hillsdale. I see a chance of snow on the Thursday. 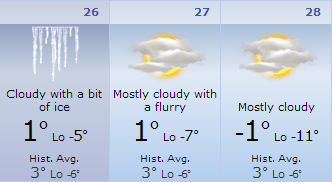 AccuWeather’s 45 day forecast does not yet stretch all the way through my Washington D.C. area visit, but the bit it can see looks nice.

So far it looks like the weather will be nice to me and not be as cold as I had expected, but I have to admit the trip from Fort Dodge to South Bend has me a tad concerned, but if the early-morning ice is minimal then it should be fine.