At about 3:20am today, I noticed some rather unusual behaviour in the traffic lights on Cotter Road between the Tuggeranong Parkway and Adelaide Avenue.

It got stranger just a few metres away at the Cotter Road/Lady Denman Drive intersection where the traffic lights were behaving normally. These lights are linked to the McCulloch St lights and it is definitely peculiar to have two pairs of linked lights where one of each pair is misbehaving in such close proximity. It became bizarre enough for me to call Canberra Connect (the ACT Government’s call centre) to report the issue when, a bit further down the road, a completely independent set of lights at the Cotter Road/Dudley Street intersection was also flashing amber. 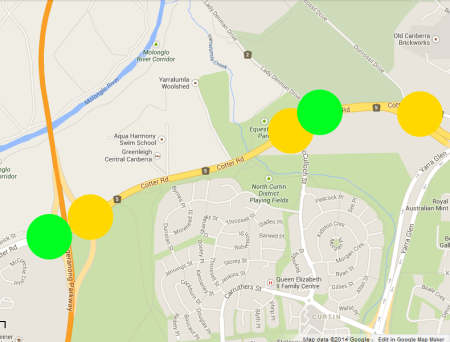 When I rang Canberra Connect I was asked if I would like to hear back from someone about my report and I am starting to wish I had said “yes”. Even though I doubt I would really hear back about this issue, and even if I did it would probably just be from someone telling me that the problem was fixed within a certain time-frame, I would be interested to know what caused this problem. It seems to me as if someone may have been a bit naughty and fiddled with a few control boxes, but it could also have been caused by a technical problem of some sort, and I’d be fascinated to know what sort of technical fault could affect some lights and not other in that manner.

I suppose it’s just one of those interesting mysteries of late-night driving in Canberra.

Happy New 2014 🙂
Not being familiar with the schematic birdnestings of the vaguaries of the Traffic Light Control Telemetry system, I am tempted to ‘look elsewhere’.
At a similar time of day (after hours of aimless driving around), I came to rest on the side of the roadway leading to a large mysterious dish~pointed~heavenwards. The locale was an ‘S’ bend, which afforded some seclusion. I to experienced some strange noctural noises etc.
As I lay there, on my airbed, in my sleepingbag (I prefer to economise on space; hence none between sleeping & bag 🙂 ), upon half of a grundsheet (the other half folded atop; to protect me from mysterious monsters~of~the~night), I gazed up at the totally overcast sky, as the ever-so-slight glimmers-of-hope began to trickle into the night sky; Pickaninny Dawn.
Then it happened. There was a quiet yet distinct semi-distant rustle~rustle…..thump, plod!,thump thump.
And then a strange Thud!, only this time very close!, so close I felt it. Then more…plonk, plunk-plunk-plink!, then an almost steady Thud, plonk-plonk, Splat. plunk-plunk etc.
Yep, aliens were invading my space, & spitting on me.
Then I fell off the airbed & awoke to even-darker threatening skies, unleashing their weepings upon me. OK time to get back in the Feroza & find some place for a 5 a.m. brekkie. Sigh.

PS Samuel if you in fact do discover what caused these mysterious goings-ons, I too would be most interested.
I know from past experience that strange random intermittent faults can manifest, when ‘shorts’ (short circuits) take place between normally totally separate circuits.

I use the McCulloch and Lady Denman lights every week and they were working OK at 4pm today. The linkage between them is a pain in the Bulli though, because every time I get the green to turn right into Cotter from McCulloch I have to jam on the brakes before I can turn left at Lady Denman while I give way to the right turning traffic. This right-turning traffic into Lady Denman get the green about two seconds before i get there. Never fails. Drives me nuts!

That is bizarre Padders. If I was you, I’d write to TAMS about it. Whether that would achieve anything is another matter, but it would be worth a shot.