The National Broadband Network regularly posts on its website updated figures regarding the number of households to which the NBN is available. Michael Still (who, unlike me, is a proponent of the NBN) has been tracking these numbers [1] and has found something odd…the NBN seemingly no longer reaches 24 houses in the ACT [2] that it reached two months ago. 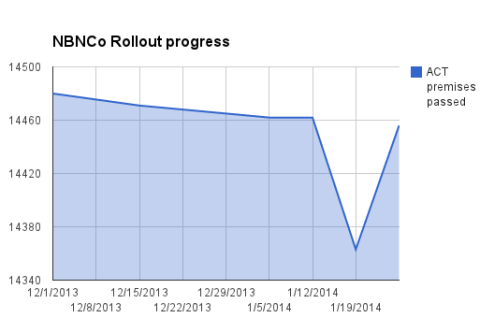 On the face of it, the numbers don’t make sense for two reasons:
1) As the project is built, it should continue to reach an increasing number of houses. If more houses were being knocked down in Canberra than being built, the decline might make sense, but then you’d have to wonder whether it would be better to prioritise the rollout in places which aren’t being demolished.

2) That amazing drop late week which mostly undid itself this week. The numbers are dodgy. Something is very wrong with the way they are being calculated.

This leads me to the inevitable question of “how many homes have actually been passed by the NBN?”. It’s possible that there was an overestimation of the number and they are now slowly auditing and correcting it, or it could be a more sinister and deliberate exaggeration of the numbers from before the federal election with a gradual correction of the numbers so as to not raise suspicions with a sudden drop.

This all leaves me wondering how much it is actually costing per house passed, and how much more over-budget this places the project than we already knew about. The NBN seems to be quickly devolving in to another TransACT rollout…over budget, behind schedule, unlikely to ever reach all of the people it initially said it would, and likely to risk leaving people high and dry if it collapses under its own weight or doesn’t get bailed out somehow.

The inescapable conclusion is that this should have been left to the private sector to do in a cost-effective manner in response to consumer demand. The rollout wouldn’t have been as quick (not that you could call the NBN’s rollout quick) and the speeds might not have been as high as offered by NBN Co. initially, but at least it would have been done in a responsible and commercially sustainable manner which didn’t require tens of billions of taxpayer dollars (perhaps close to $100 billion) at a time when the federal government really can’t afford it.