Just after the beginning of the year, C-SPAN Book TV’s [1] “In Depth” program spent their monthly show interviewing [2] author, constitutional lawyer, and radio host Mark Levin [3]. This show sits down with a non-fiction author each month to discuss their books, subjects related to their books, and a little bit of the personal life of the author. 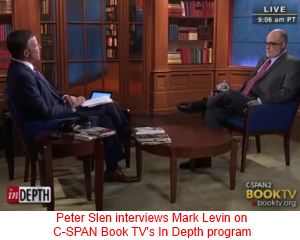 Mark Levin has written a number of best-selling books on the current state of U.S. politics, governance, and society, and on his ideas for solutions to the problems facing America. In Mark’s most recent book “The Liberty Amendments” he proposes a few amendments to the U.S. constitution which he believes would address some problems by making government more closely resemble what the framers of the constitution envisaged, and in the process make society freer. The book goes in to some details as to how Mark’s proposals fit in with the historical writings of deliberations of the Framers. As this is his most recent book and also his most solution-filled book, Book TV made it the “book of the month” for their book club and more time is spent on this book in the interview than any of the others.

Mark has also written a more personal book titled “Rescuing Sprite” which is a story about a dog (Sprite) which Mark and his family rescued from a shelter…the book details how they dealt with some of the health issues which arose from abuse and neglect which Sprite received prior to being rescued and how they overcame some of these issues. The book also, quite candidly, deals with the difficult subject of having to put Sprite down, as well as some details about some of the other dogs in Mark’s life. I read this book a few years ago (and have read most of Mark’s other books) and found it difficult to read emotionally, but also quite comforting in helping me deal with Nattie’s death last year. I was pleased to hear Mark say during the interview that, when he retires, he would like to permanently work rescuing dogs from abuse and neglect.

The interview goes for three hours. There are no commercial breaks although the interview does stop for a break roughly each hour, in which time they run some pre-recorded packages about Mark. The first roughly 40 minutes is conducted as a straight interview, and after this the interview continues but also contains callers asking Mark questions. It is a very worthwhile three hours of viewing and I found it to be very interesting and thought-provoking.

The interview (minus about the last minute) is available on YouTube as embedded above, although it should be noted that the YouTube version was uploaded by a third-party and contains some video glitches. There is a much cleaner version available on the C-SPAN website [4] (and the Book TV website [2]), but it can not be embedded here as they have disabled that function. It can, however, be purchased from the website in DVD or Audio CD format…I enjoyed the interview enough to purchase it on DVD.

I hope you find it as interesting as I did. I had already planned on taking some of Mark’s books with me to read on my US trip (along with some other books) but after this interview I plan on taking another one along as well as there were a few points raised in the interview which made me want to revisit some of Mark’s earlier work…but that’s a story for another day.