The Republican Party has started an online straw poll to gauge interest in various candidate for the 2016 Presidential nomination. While I applaud the effort, I wonder if it would be a better idea to focus on the 2014 midterm election at the moment as I think that if Republicans can gain control of the Senate and maintain control of the House, they can lay some very powerful groundwork for the agenda of the 2016 candidate.

Still, The Blaze has reposted the Washington Examiner’s list of people [1] on the GOP straw poll and Glenn Beck and co-hosts’ reaction to it. I’m disappointed that they so quickly dismissed Herman Cain as I would like to see him run again, but I’m happy with the rest of their selections.

First, to The Blaze. My selections and thoughts follow below.

Beck said they were either progressive Republicans, or we’ve “been there, done that.”

Many names were left on the list simply because not enough is known about their policies and beliefs at this point.
[..]
Four candidates quickly emerged as the top contenders among the group: Sen. Ted Cruz (R-Texas), Sen. Rand Paul (R-Ky.), Gov Scott Walker (R-Wis.), and former Rep. Allen West (R-Fla.).

I agree with those four being great options. I’ve been thinking about this a bit myself in recent weeks and had forgotten about Scott Walker and Allen West and am glad to see them on the list.

With the exception of Herman Cain, I would dismiss the same people (Huckabee wouldn’t have been dismissed if he hadn’t run away from his radio show late last year while blaming his syndicator for not finding him an audience…he was in Rush Limbaugh’s timeslot…if he wanted an audience, he had to build it himself rather than waiting for someone else to do it. That approach makes me worry about his passion to carve out his own success) and would also dismiss Ron Paul (not to be confused with his much more sensible son Rand).

It’s nice to see Ben Carson on the list, and I think he would make a great Cabinet secretary, but I’m not sure that he is Presidential material.

It’s also good to see Sarah Palin on the list and, if she were to run, she would have my support without hesitation.

One person I was disappointed to see missing from the GOP list is Arizona Governor Jan Brewer. As Governor she has been very successful and hasn’t been afraid to take on the federal government when it has done something which has put the interests of Arizona in harms way (eg. the Feds refusing to secure the border, making her state a major illegal entry point; and funding the Grand Canyon while the federal government was shut down so as to protect the tourism industry in Arizona which depends on the Grand Canyon). On the weekend Jan met with Rand Paul and posted a photo of their meeting on Facebook, which left me thinking about how fantastic it would be to see them both on the Presidential ticket as they’re both fantastic candidates and are so good that I wouldn’t really mind which one of them was running for President and which one was the running mate. 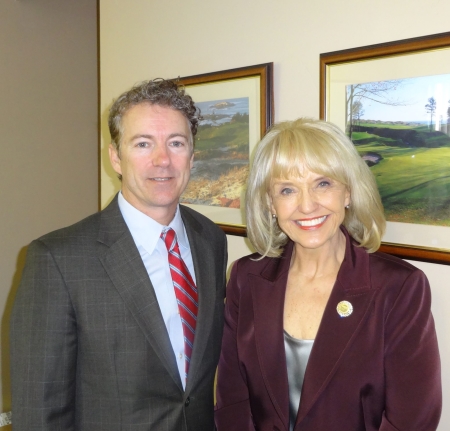 Alas I think Jan is more interested in serving her state than the country. This is great news for Arizona and I’m sure the rest of the country will learn things from her example, but it’s a shame for the country, even if it’s nice to see a Governor who takes the job very seriously and doesn’t necessarily see it as a stepping stone in a political career.

So, anyway, my list of preferred candidates in no particular order (other than being my picks from the GOP list first, and my additions afterwards). I’m not too fussed about who does which job, but I would like to see both the Presidential and Vice Presidential candidate drawn from this list.

Of course there are some people on that list who I think would do a better job than some other people on the list, but I have confidence in all of these people. Ideally I would probably add a couple more media people to this list, but the two I have listed are people I think would not have much to lose by leaving their media career behind to seek public office.

My ideal scenario would be a combination of someone with federal government experience and someone without federal government experience. This would provide a duo which both understands the Washington process and how to bend it to your will, while holding on to the important understanding that in the US system, the federal government is only supposed to exist to do things which can’t be logically done by a state or local government, or the private sector. I believe that all of my preferred candidates understand this, but I still think that people who have spent time in Washington D.C. can unwittingly lose sight of the importance of the smaller jurisdictions and the non-government sector, and it would be helpful to have someone there on their team to keep them on track.

Comments Disabled To "Some early picks for 2016 Republican Presidential candidate"

My interest and, ipso facto, knowledge of US politics has waned considerably since the most dreadful experiment of our age took place that I won’t name, but his initials are Barack Hussein Obama.

Therefore, I regret I am not in a position to critique the names you have listed (although with a couple I have already muttered “he’s got to be joking!’ but I will chat to you about those over coffee one lunchtime when the weather cools.)

I have certainly heard, and am a great admirer of Ben Carson. The good doctor would be an outstanding choice. It won’t happen, however. There are too many uber right wing forces at play in American politics and I doubt Dr Carson would be bothered trying to unite the very disparate factions that exist in US Conservatism. Indeed, this will take up a considerable amount of time and energy for whichever poor soul sticks his or her hand up for nomination, and, to cope with same, I wish them all the fortitude they can muster.

All I can say is the worst Republican candidate for President could only do a better job than the encumbent.

See you in 2016, Samuel, but hopefully well before!

Obama’s re-election in 2012 was particularly disheartening for me and I admit to having not followed US affairs quite as closely since then, but it seems to me that his bubble of person appeal has finally burst under the strain of his awful policies. This provides a great opportunity to right the ship (pun intended) with the 2014 and 2016 elections being a key part of that process.

Consequently, my interest has returned.

I know we disagree on Michele Bachmann. Even I tired of her repeating the same lines in every speech and interview in the 2012 Primaries…I only want her to run if she has learned from it. Of course our disagreement about her was on social policy and not her performance in the 2012 Primaries.

I, too, like Dr. Ben Carson, but I would prefer to see him in a key House or Senate leadership position…I think it would be a better spot for him and would have an immensely positive impact on legislation.

As for the others, well on a few of them I have deliberately picked some people who have received little or no consideration up until now. In many cases I doubt they will put their name forward but I would like to see them have a greater role anyway. Take Todd Starnes for example…I’d rate the chances of him running being near zero, but he made my list because I tend to agree with him on most things and he has a way of cutting through issues and concisely explaining his point while showing a vision for the future…with some assistance from someone with executive or legislative experience I think he could be a fine President, but I’d probably be even happier to see him take the role of Press Secretary in a conservative administration.

There is, in my view, no shortage of talent. The division between conservatives and moderates in the GOP is the problem in my view. The moderates seem to want to manage the country’s decline while trying to upset as few people as possible, whereas the conservatives seem to want to save the country and don’t care who they upset in the process. The conservatives are on the right path but some have the wrong approach to selling the message in my view…the people on my list, in my opinion, have roughly the right stance on how to save the country (there are variations but they’re all roughly in the right place) but more importantly have demonstrated that they can sell their message and explain why their vision is right for individuals and the country.

At the very least I am hopeful that the GOP have learned from the McCain and Romney campaigns that policies are important but the message needs to sell the policies properly. Policies can’t sell themselves and a nice smile can’t make up for a lack of messaging…and try as we might, pointless chants and slogans only work for Democrats…conservatives don’t get that sort of free pass in the media.

I look forward to having lunch and coffee with you again soon Padders.