If there is one thing that intrigues me and fills me with an obsession to “check in on the current status”, it is the postal system, or to be more precise, figuring out how things get from point A to point B within the postal system. Consequently, I like using the tracking services of the various postal agencies, and have discovered some interesting quirks.

One thing which has me bewildered is the inconsistency in tracking between Australia Post and the United States Postal Service. An Australia post representative told me once, when I asked about their tracking service, that it is not meant for real-time tracking, and that not every scan of an item is registered in the tracking system (a “scan” being when the barcode of an item is scanned as it passes through a sorting facility, or is given to a delivery driver, or enters a post office, for example). This is very strange seeing as Australia Post charge more for most of their tracking services, and leads me to the question, is it really a tracking service if it can’t be used for real-time tracking?

An interesting difference can be spotted if you send something from Australia to the United States. Depending on the service you buy from Australia Post, tracking of the item will vary from non-existent to comprehensive up until it leaves Australia, at which point it enters the “not every scan is entered in to the system” phase. Oddly though, any item with a barcode will be tracked in detail by USPS right from the moment it enters the postal system at the Australian end.

Clearly the USPS system is automated and takes pretty much every detail in their system and makes it available for public tracking, whereas Australia Post’s system either requires manual entry, is overly-selective about which details are made publicly available, or a combination of both.

The whole system is very strange, but one thing experience has taught me is that there is no point in paying extra for tracking of items being sent to the US, as USPS will happily provide all of the tracking data free of charge via their website and mobile app.

Of course, one of the reasons I like tracking services is a life-long curiosity about how items travel through the postal system. We’ve all heard letters about the “dead letter office” and items being delivered fifty years late, and I’ve always been curious about how things get through the system. I recall once when Nattie was a much younger dog, I sent her a letter from the post box across the road so that it would travel through the postal system and hopefully pick up the scents of various parts of Canberra, and she would get to smell them on the letter when it arrived. It seemed to work as Nattie did give the letter a good sniff when it arrived.

In the last week, I have seen some very interesting and odd detours taken by items which I have sent to people.

A parcel which I sent to Sydney got lost for about a week after the recipient had been advised it was available for pickup from the local post office. The recipient described it to me thus:

What had happened was that they left a card in the box saying there was a parcel at the post office and I hadn’t been expecting one. I went and they couldn’t find it. So I returned the next day and they still couldn’t find it and said they would phone the delivery driver.

Went the next morning before the PO opened and got the people who do the sorting and they couldn’t find it. ……. I got it the following Wednesday. They finally found it somewhere in the PO.

I have a post office box at the Dickson post office (1272 if you want to send me something…no ricin though, I can do without a bunch of people in hazmat suits buzzing around me with detectors and hoses) and often receive parcels which are just a bit too big to fit in the box and are instead stored in the post office’s back rooms. When I hand over the parcel notification card at the counter, it often takes a little while for the post office person to return with my parcel. On a few occasions, they have come back to me to ask again for my PO Box number…this usually results in them muttering “that’s what I thought you said…hmmmmm” and wandering back out to the back rooms with a confused and frustrated look on their face. I don’t know what the sorting procedures are like in there, but they seem a tad chaotic. I do have to give credit to the senior staff member who works there now and used to work at the Civic GPO…I don’t know whether he is the boss or not, but things have certainly improved since he arrived.

Another interesting detour was taken by a parcel I sent to New Jersey last week. It arrived this week, but the route was perplexing.

For the benefit of those of you not familiar with United States state abbreviations and geography, Washington state (WA) is located on the north-western coast, on the other side of the country from New York and New Jersey which are located next to each other on the east coast. Mapping the journey from the time it entered the US really highlights how absurd the trip was. 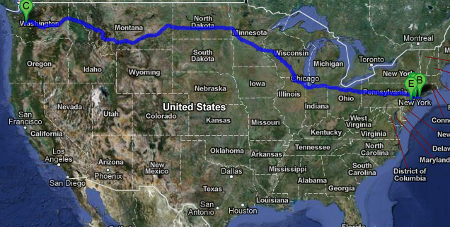 Google Maps has labelled the various points of the trip A through E, starting at New York NY and ending at Monmouth Junction NJ. As you can see, Federal Way WA is nowhere near any of the other locations. If the parcel had entered via the international sorting centre in Los Angeles, then it might have made sense to go via Washington state, but I can’t see much logic here, especially once I zoom in on the New York/New Jersey area. 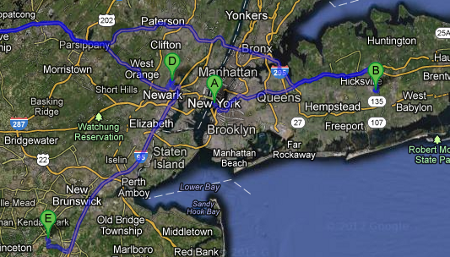 I should not that I have not plotted exact locations for any of the sorting facilities, so the spots on the map may be slightly out, but still, a trip from A to B to D to E without C would make much more sense. I wonder if someone at the Bethpage facility accidentally put the parcel in the wrong pile? Regardless of how it happened, it’s an expensive mistake for the postal service to make, and at a time when USPS is having fairly serious financial problems, it makes me wonder how much of their financial woes are due to inefficiencies like this.

Going back to my original fascination with how things make their way through the postal system, I would love to embed some tracking devices in items I post, and watch where they go. One day I might just do that. It would be fascinating