Canberra and Queanbeyan hardware chain Magnet Mart, which is currently in a state of partial-rebrandedness, will completely rebrand to Home hardware within the next day or two, as a television advertising campaign for Home Hardware which is set to hit TV screens within the next couple of days will claim that Home Hardware is “now open” in locations which currently house Magnet Mart stores.

This change has been on the cards for a long time. Magnet Mart opened in 1985 in Queanbeyan on the corner of Yass Rd and Aurora Ave, a location where it still has a store today. It later expanded in to Canberra by taking over hardware stores in Phillip and Belconnen. The Phillip store still exists but the Belconnen store closed some time ago and the site has since become a Good Guys electrical retailer. A further store was opened in Gungahlin in 2002

Magnet Mart also opened stores outside the Canberra and Queanbeyan area, of which it still operates the Bowral and Goulburn stores.

In 2011 a company called Danks bought Magnet Mart, which had been a family-owned business until this time. Danks already owned Home Hardware and Thrifty-Link Hardware at this stage, however it was stated that Magnet Mart stores would remain branded as “Magnet Mart” for “the foreseeable future” [1]. It seems that we have now reached the unforeseen portion of the future.

Danks, incidentally, is owned by Woolworths. Woolworths directly owns and runs the Masters chain of hardware stores, one of which is located near Canberra Airport, however despite owning Danks, Woolworths exerts less direct control over the Danks-owned brands than it does over Masters.

Last night when the impending advertising campaign regarding the completed rebranding of Magnet Mart was brought to my attention, I decided that it would be a good idea to head out and get some photos of an icon of Canberra’s history before it completely disappears, and so after work in the wee hours of the morning, I did just that. Before that though, I checked out the Magnet Mart and Home Hardware websites to see how they were progressing with the rebranding.

On the Magnet Mart site, the old site is still there but it is quite clear that changes are being made. 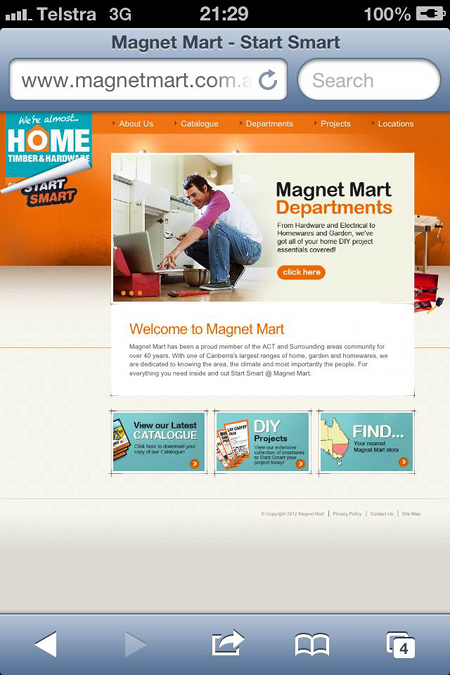 Over at Home Hardware, they seem to be ready to claim full ownership of the stores as their map of stores in the Canberra region identifies all of the Magnet Mart stores and, although it names them as Magnet Mart, it uses a Home Hardware icon for them on the map. 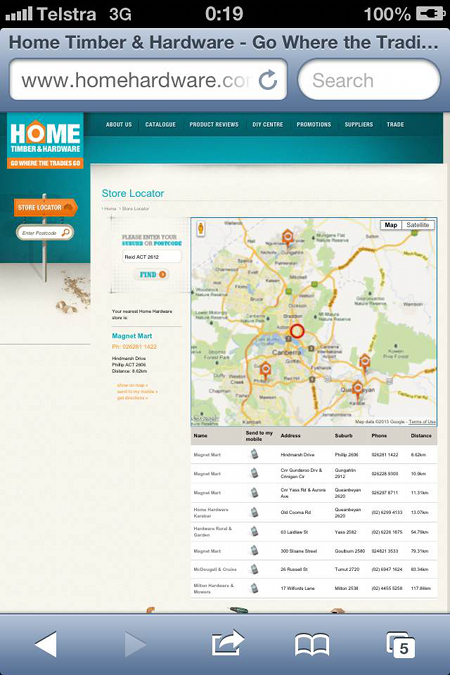 Before I go on, I should apologise for the quality of some of the photos which appear below. They were taken in the early hours of the morning on my phone as I thought it might seem a bit suspicious if I went home and picked up my proper camera.

The Gungahlin Magnet Mart store is in an intriguing state of dual branding. The main sign on the building has been changed to the “we’re almost Home Hardware” sign. 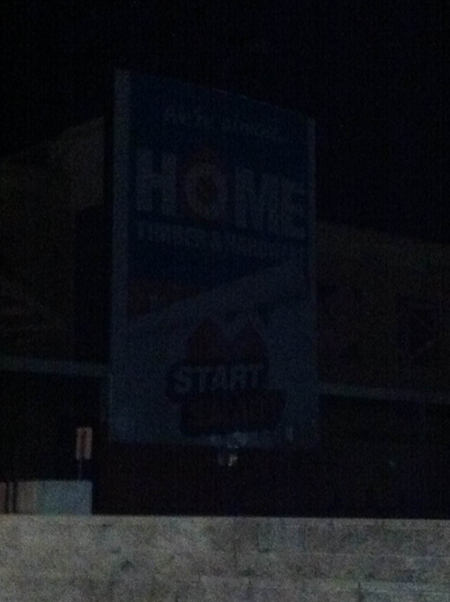 As has the main outside sign, but the building itself still carries the “start smart” Magnet Mart branding. 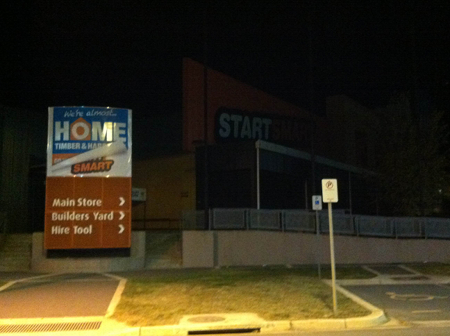 In Phillip, the rebranding is a few steps behind. One of the outside signs has been changed. 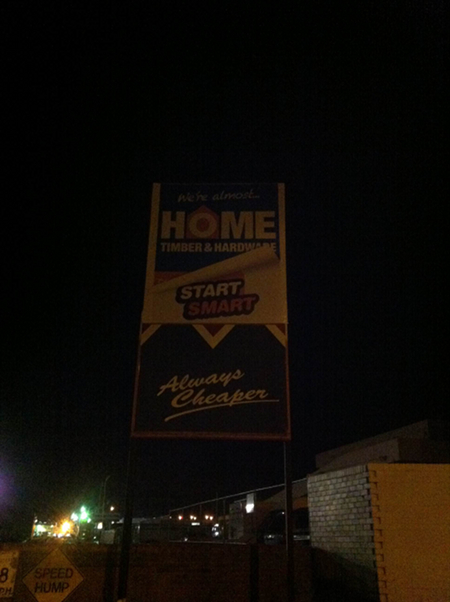 It is interesting to note that updating branding was never something Magnet Mart did in any hurry. The base of that sign contains the “Always cheaper” slogan which Magnet Mart used through the 1980s and early-to-mid 1990s.

Approaching the Phillip Magnet Mart building from the western end of Hindmarsh Drive, there is no sign of impending change (above sign excepted). 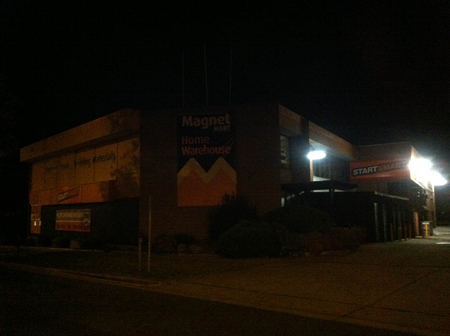 And a closer look at the Hindmarsh Drive side of the building. 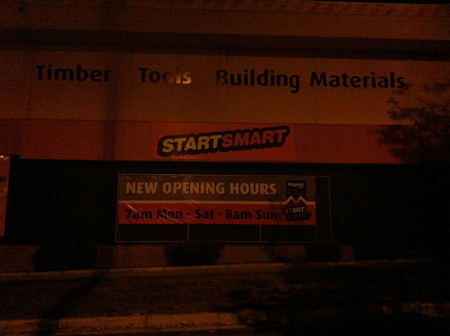 Although from the eastern end of Hindmarsh Drive, things are a little more obvious. 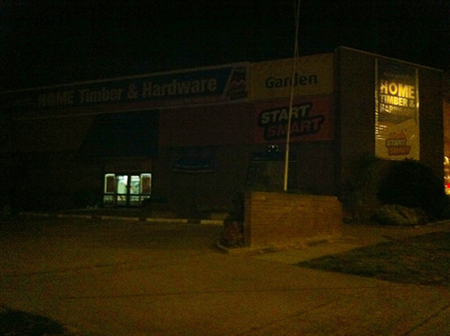 In Queanbeyan, at Magnet Mart’s original store, the rebranding is well and truly underway, as can be seen on the building and the large sign on Yass Road. 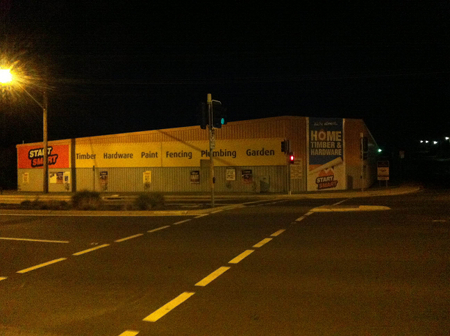 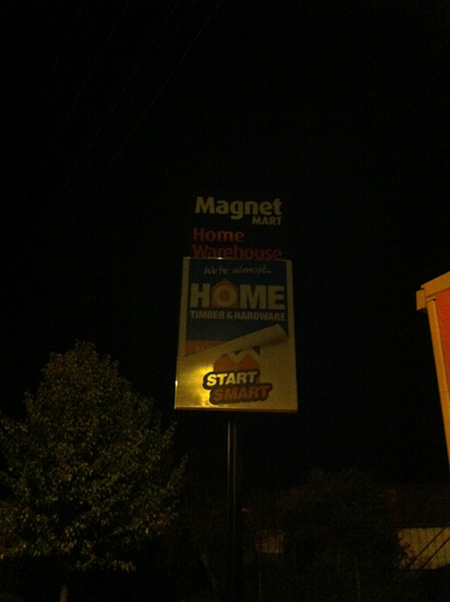 Showing its age, the signs advertising current specials on the side of the Magnet Mart building, do not contain the current “start smart” branding or the very old “always cheaper cheaper” branding, but instead an internet-era “low prices everyday” branding with a Magnet Mart website URL (the website is just below the word “Magnet”, although it doesn’t show up very clearly in this photo). 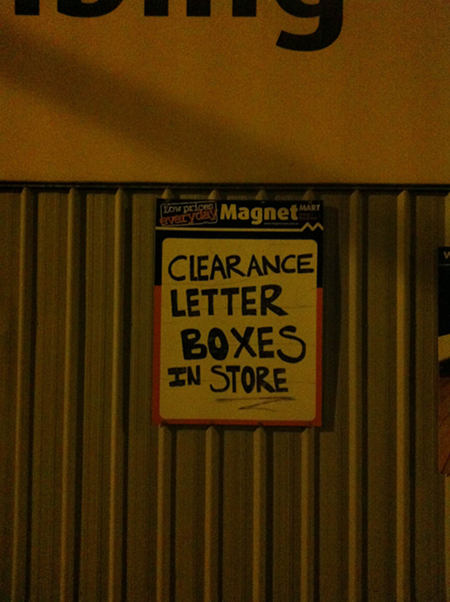 On the very poorly-lit Aurora Avenue, I was fortunate to have a passing truck’s tail lights providing a little bit of extra light for this photo of a completely un-rebranded side of the building. 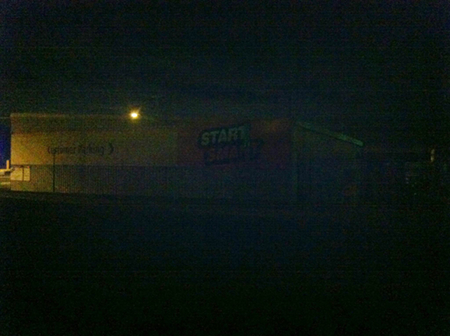 Although the sign at the carpark entrance has been updated, and was the only sign I could see on any of the Magnet Mart stores on which the Home Hardware “go where the tradies go” slogan was visible. 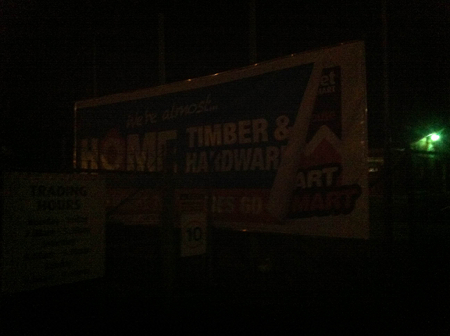 And a building over the back of the premises (which can be seen from the street) has been updated, carrying both Home Hardware and Magnet Mart branding. 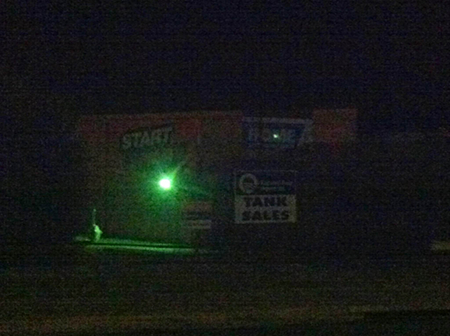 Anyway, the Karabar Home Hardware store is a tad interesting in that it is the only store in the region which seems to be displaying the Home Hardware mascots Sandy and Rusty. 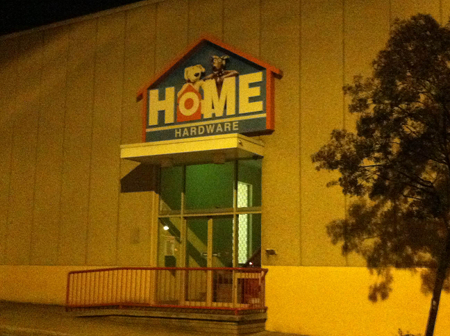 This is in stark contrast to one of the other Home Hardware stores way over the other side of the country in Merrendin in Western Australia. That store gives Rusty and Sandy pride of place, and even goes by the name of “Two Dogs Hardware”. 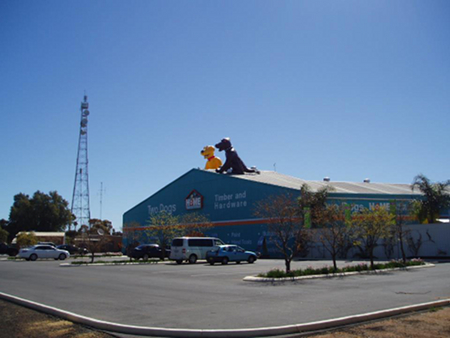 The Karabar store also has the slightly out-of-date Home Hardware slogan “the proper hardware store” on some of its signage. 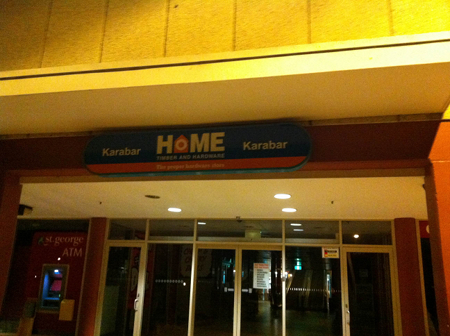 And also has a sign promoting the “dogalogue sale”…because a store with dogs as mascots can’t have a catalogue. 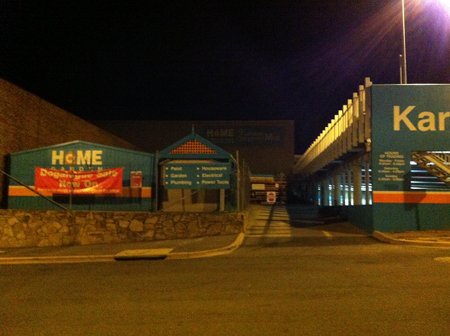 It is also the only Home Hardware store in the region with its very own covered carpark, although it probably does share it with the adjoining shopping centre. 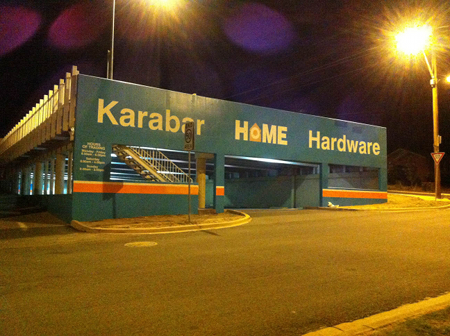 So, Magnet Mart is almost gone. It’s the end of an era in Canberra, and a little sad for me as I grew up with Magnet Mart commercials. Up until about the mid-1990s they used a jingle with which I enjoyed singing along. Courtesy of Frank of Franskter’s Archives [22], here is the audio of a Magnet Mart television commercial from 1987 containing that jingle.

Also thanks to Frank, I have a recording of myself singing along to a Magnet Mart commercial in 1994. Frank did a great job of restoring the tape from which this clip came, and I have a bunch more tapes of myself through my childhood years which I will be entrusting to Frank to digitise and clean up.

I suppose I should note that I did enjoy the hijinks of Rusty and Sandy the dogs when they featured prominently in the Home Hardware commercials, so at least I will still see some link to my childhood in the new Home Hardware stores, even if the memory isn’t quite as old and fond as the old Magnet Mart jingle.

I suppose some people might think it a tad odd that I drove all over Canberra and Queanbeyan to take photos of hardware stores in the dark after 2am, and they may have a point, but alas I doubt that I’ll have time during the daylight hours today and I wanted to be sure that I could document the stores before they completely lose the Magnet Mart logos and branding.