Last week, it was hot. No doubt about it. And on the back of that heat there were a number of stories in the media about “record heat” and how it’s never been hotter, and it’s just going to keep getting hotter. It was the usual collection of summer news stories presented in a handful of new ways.

The first story to catch my attention was a story about it being so hot that the Bureau of Meteorology had to add a new colour to their temperature maps for all of these newly reached temperatures. I immediately realised that these colours were really just re-classifying temperatures which have previously been classified under a different colour, but I didn’t recognise the full extent of the trickery involved in the colour-fiddle. I’ll explain that in a moment.

As the days went by and more stories popped up along the “record heat” lines, I started to see a few discrepancies which were disproving earlier stories. This was bugging me all weekend, but I didn’t have time to investigate the stories properly…this afternoon however, I do have time, and I’m glad because my suspicions have been vindicated.

As I said at the top, it has been hot, although after a mild and wet summer last year, this year’s summer probably feels warmer than it really is. That’s anecdotal though. The facts are in the numbers.

On that note, back to that map from the Bureau Of Meteorology. 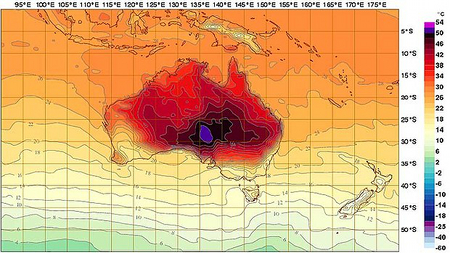 [1]
(Temperature map for the 8th of January)

This map was plastered across much of the media, with the general line from most of the media being along the lines that “it’s so hot that the weather bureau have been forced to add two new colours to the temperature map to display these hot temperatures”.

The ABC, not surprisingly, had one of the least accurate and most alarming statements on the matter [2]:

Heat drives bureau back to the drawing board
The Bureau of Meteorology has been forced to introduce new colours to some of its charts because of recent extreme heat in Central Australia.

The raging bushfires in Australia have added a new colour to the charts of the meteorological department as the temperature soars to record highs.

Shades of deep purple and magenta have been added to the forecast map for temperatures up to 54 degrees Celsius.

The temperature range was previously capped at 50C.

Yes, that’s right, it’s a forecast map, not an historical map. While the ABC article does state this, it’s not the impression given by their opening remark. The same can be said for most of the other media outlets that ran this story.

The map doesn’t report temperatures, it predicts temperatures. It was not changed because the temperatures had gone above the existing scale (which, incidentally, topped out at 50+, not a flat 50) but because one of the Bureau’s computers had predicted a hot day.

So, that map, which was used by much of the media to convince everyone that new records had been reached in a large section of South Australia, actually said no such thing…not that the Bureau were in any hurry to correct the record.

Hot on the heels of that, the Bureau had some more climate confusion for everyone: A measure called an “area-average high temperature”. Basically what that means is that they take the hottest temperature of the day at every weather station in the country and then, with a bit of mathematical work to assign temperatures from weather stations to the areas around them, they work out what the average temperature across the country was. They reached a conclusion that we had the hottest day ever [5], with an average maximum of 40.33 degrees.

Assistant Director of Climate Information Services, Neil Plummer, said the heatwave had broken national records. This is consistent with the trend of an increase in extreme heat events associated with climate change.

It’s an interesting statistic, but when you consider how it’s calculated, it’s not a particularly useful metric as, due to the increasing population over the years, more and more inland temperature gauges have popped up (even in places like Western Sydney which is always significantly hotter than Coastal Sydney), and as technology has improved, more of them are now full-time gauges, whereas there was a time when a lot of temperature gauges, especially inland ones, would only work at certain times of the day and could therefore miss the actual hottest point of the day and report on a slightly cooler point of the day instead.

Naturally, with more inland gauges, more hot temperatures are reported, which skews the measurement towards higher temperatures. It may only be slight increases in the calculated measurement, but when you’re talking about averages of large amounts of data, small changes make quite a difference.

The interesting thing about those temperatures is that none of the records were set in 1972 when the former area-average record was set, and only two of the twelve towns in that fairly representative selection of places which were apparently very hot over the last couple weeks actually set a record this year, and even they didn’t set a record on the day which the Bureau claims is our hottest on record, based on their calculation. Two of those towns had their hottest day of the year-to-date on the 7th of January this year, but that is hardly significant given that we’ve only had two weeks of this year, and it’s definitely not a record.

In order for not even one of those places to have set a record at the time the area-average maximum calculation set a record, either an absolutely outstanding number of places set a record on those days or the calculation has to be giving too much emphasis to some places which are significantly hotter than other places.

So, did a large number of places set records on the 7th of January, the day on which we apparently broke that area-average maximum temperature record? No. Only one place set a record on that day: Leonora in Western Australia which recorded 47.8 degrees, and even that is not a new record as it previously reached the same temperature on the 1st of January 1957.
(The document which the Bureau published which contains this information is being updated daily. At the time of writing, the version which I used was on the Bureau’s website at http://www.bom.gov.au/climate/current/statements/scs43c.pdf [18] however, as this document will be changed in short-order by the Bureau to add data from today and future days, I have archived this document here [19] so that my reference material is available for perusal in the form which I saw it).

In that case, mathematically speaking, the Bureau’s area-average maximum temperature calculation has to be giving too much emphasis to places which are regularly hotter than others in order for it to have set a new record. In other words, it’s bunkum, it’s bogus data, and it’s junk science.

There is a little bit more evidence of the fact that this summer is not hotter than ever before, and I touched on it very briefly near the start of this post. That temperature graph which supposedly topped out at 50 degrees, did in fact not top out at 50 degrees. I noted earlier that the top colour was for “50+” and that temperatures in excess of 50 degrees have been seen in Australia before.

In a somewhat peculiar (due to its emphasis on recent heat despite noting multiple older and hotter temperatures), but accurate, story which was also picked up by the media, WeatherZone advised that we saw our hottest temperature in 15 years [20]. This story published on the 13th of January, added to the cavalcade of stories about “record heat” and gave the media some more information with which to continue to advise that global warming was running rampant.

Yesterday (Saturday) Moomba in the far northeast of South Australia recorded a maximum temperature of 49.6 degrees, which makes it the highest temperature recorded in Australia in 15 years.

True enough, although it should be noted that this record is missing from the Bureau’s list of records set over the last week or so, which I noted a short time ago, as this is one of those weather stations which have been added in recent years, having been commissioned in 1995. The Bureau’s document only notes stations which have existed for at least 30 years.

This is the hottest recorded day in 15 years, which means that every day between:

February 1998, in the Western Australian Pilbara, where Nyang reached 49.8 degrees.

Anyway, I’m drifting away from the Bureau’s hot spot graph which I was talking about. The WeatherZone article by meteorologist Brett Dutschke also notes that:

Moomba’s 49.6 degrees is also the highest temperature recorded in SA since Oodnadatta reached 50.3 degrees 53 years ago, in January 1960.

Australia’s record is held by Oodnadatta, 50.7 degrees, also in January 1960.

On more than one occasion temperatures in Australia have exceeded 50 degrees, and on every one of those occasions a black “50+” colour has sufficed. Of course, this map from the Bureau was predicting temperatures in the 52 to 54 degree range on the 8th of January, and if such temperatures had come to pass, then the new colours might have been useful, but we didn’t even come close to breaking an existing record which managed to fit on the old colour scale, let alone see a temperature in the new colour range.

Yet again, the Bureau’s predictions of warming doom have failed to come to pass. Yet again, the data shows us that, far from seeing an alarming rate of warming, we are seeing a continuation of the usual cycle of cold, medium and hot years and that, this year, we happen to be experiencing a peak which is to be expected after the recent mild years. Not to mention that on the global front, places like China are more than compensating for our alleged warming with a bit of a cold snap [21] where they’ve seen temperatures as low as -40.

As usual it seems that the spinning of the numbers by the Bureau and the cherry-picking of that spun data by various sections of the media, bares little if any relation to the facts:

The facts speak for themselves. It’s just a shame that many people will never hear them from most of the media or the government agencies who have been put in charge of monitoring the climate.