As long-time readers of this blog would know, I’m not a huge fan of The Canberra Times as I prefer publications such as The Australian and The Daily Telegraph, however it does on occasion have something of genuine interest to me.

Yesterday, after having helped Liberal candidate for Molongolo Elizabeth Lee with her campaigning at the Ainslie Shops, I was helping out with sorting her pamphlets at her office in Civic when the Canberra Times turned up, wanting to put together a profile story about Elizabeth. Today, that story appeared in the paper. I’m pleased about two things about this article. Firstly, it seems to be a fair article. There were some questions asked which made me wonder about the agenda of the journalist, however the article turned out to be quite fair. Secondly, the group photo of all the people who had gathered in Elizabeth’s office on a Sunday afternoon appeared in the paper not once, but twice, with Elizabeth’s personal photo being used on the front page of the Canberra Times’ website.

Here is the front page of today’s Canberra Times. 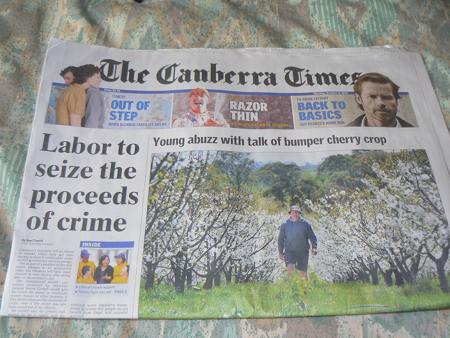 The article itself is on page two, however there is a very brief tease for the article on the front page, under the headline on the left of the page. 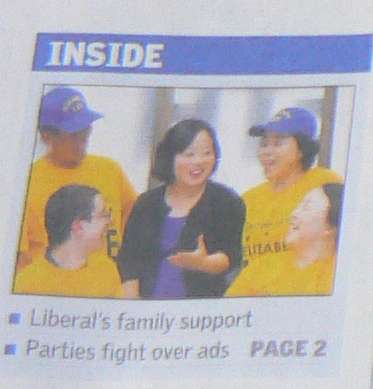 The article on page two is accompanied by a large photo. The photo and headline take up most of the space above the fold, with the body of the article mostly being below the fold. 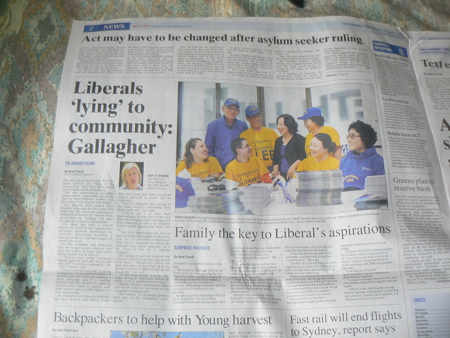 Here is a closer shot of the article. 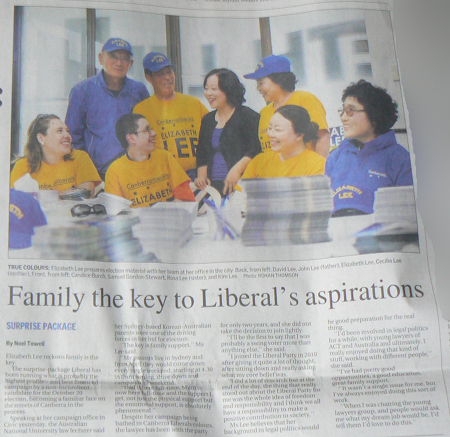 Family the key to Liberal’s aspirations 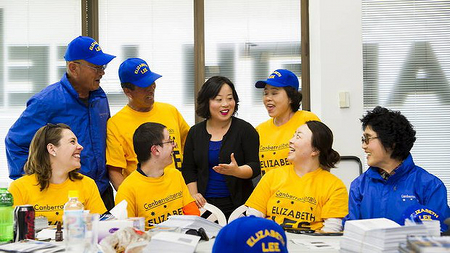 The surprise-package Liberal has been running what is probably the highest profile – and best financed – campaign by a non-incumbent candidate for the October 20 election, becoming a familiar face on the streets of Canberra in the process.

Speaking at her campaign office in Civic yesterday, the Australian National University law lecturer said her Sydney-based Korean-Australian parents were one of the driving forces in her bid for election.

”My parents live in Sydney and from April they would come down every single weekend, starting at 4.30 in the morning, drive down and campaign all weekend.

”Dad is here full-time, Mum is now here full-time and the support I get, not just the physical support but the emotional support, is absolutely phenomenal.”

Despite her campaign being bathed in Canberra Liberals colours, the lawyer has been with the party for only two years, and she did not take the decision to join lightly.

”I’ll be the first to say that I was probably a swing voter more than anything else,” she said.

”I joined the Liberal Party in 2010 after giving it quite a lot of thought, after sitting down and really asking what my core belief was.

”I did a lot of research but at the end of the day, the thing that really stood out about the Liberal Party for me was the whole idea of freedom and responsibility and I think we all have a responsibility to make a positive contribution to society.”

Ms Lee believes that her background in legal politics would be good preparation for the real thing.

”I’d been involved in legal politics for a while, with young lawyers of ACT and Australia and ultimately, I really enjoyed doing that kind of stuff, working with different people,” she said.

”It wasn’t a single issue for me, but I’ve always enjoyed doing this sort of work.

”When I was chairing the young lawyers group, and people would ask me what my dream job would be, I’d tell them I’d love to do this.”

As I noted earlier, I am pleased to see that the article is fair. I have come to know and support Elizabeth in recent times and, although I expect we may disagree on some aspects of federal politics, the big reason I support Elizabeth locally is that she seems to be very committed to efficient local service delivery and recognises that the Legislative Assembly is not the place for federal politics. She has also shown great organisational skills during the campaign so far, which is one of the big things I look for in a candidate. It has been my pleasure to support Elizabeth…and it’s funny how one can become somewhat excited about being in a paper which one doesn’t hold in the highest regard, and how at the same time that paper can improve its standing in my mind with a fair article such as this one.