I’ve been flicking through some of the coverage of the annual White House Easter Egg Roll, and while it looks like there was some fun to be had, and most of the coverage was positive, there were a few peculiar occurrences which have been glossed over by most of the media.

My favourite one is an event which seems to have been ignored by almost all of the US media. I know that talk radio gave it a mention, but other than that, I can’t find a single instance of this being covered by the American media…in fact, I’ve had to track the story down in the British press. Before I explain that though, some words from First Lady Michelle Obama at the Easter Egg Roll, courtesy of USA Today [1]:

The first lady discussed the importance of vegetables, telling parents: “If we have (too many) fried chicken and the carb-heavy dinners, the kind we all love, we’re not setting our kids up for success. Veggies aren’t really a choice. We think they are, but they’re not.”

This was part of the theme for the day, and is an ongoing theme of Mrs. Obama who has an insatiable appetite for talking about vegetables. And yet, as Britain’s Daily Mail reports [2], the menu on offer could not have been more at odds with Mrs. Obama’s message.

The Obamas welcomed thousands of children and their parents on to the South Lawn this morning to feast on a brunch menu that included waffles, French toast and slurpees. 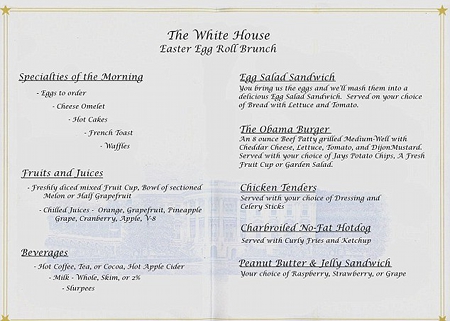 I particularly like the Obama Burger. Full of everything Mrs. Obama detests, and yet it still bares her name. The token fruit cup or salad at the end of the burger is amusing, but nothing more than a token gesture to allow Press Secretary Jay Carney to say that “healthy options were available” if anybody bothers to ask him about it.

Away from the menu, the Ego In Chief had his face plastered on the basketballs which were being used for the hoop shooting competition. Keith Koffler [4], among others, has published a photo of ABC News White House correspondent Jake Tapper holding the basketball. 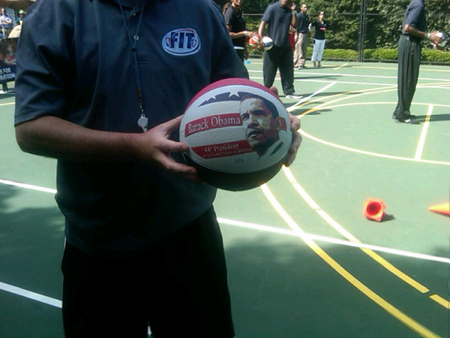 I would probably refuse to play with a basketball with Obama’s face on it, as I would regard having to see his face for that period of time as some sort of cruel and unusual punishment…interestingly, I may have been right, the ball was used as an instrument of torture, just in a different way to how I would have expected. Back to USA Today for details:

Obama, meanwhile, visited the White House basketball court, half of which was being used for tennis lessons that featured legendary player Chris Evert.

The hoops end featured “Shoot for Strength,” where each shot made by Obama or a guest professional player meant three push-ups for nearby children.

So, Obama has a victory, and everyone else gets punished for it and has to pay. Sounds like an appropriate analogy for his presidency really.