An email to 2UE’s John Kerr

The number of people who are not employed and are not looking for employment has risen to an all-time record high of 88 million. That's 28% of the population. Real unemployment (ie. people who are out of work and want to find work) is actually around the 13 to 14% mark. The US economy has also suffered from the lowest rate of economic growth for any post-recession period in the last century. The economy there is hardly growing, the real number of unemployed is rising, and inflation is creating further problems. It's called "stagflation" and in many ways, the current President and his economic policies are to blame.

The recovery of the US economy is, sadly, a myth, and another four years of Obama will only make it worse. I'm not sure that the Republicans opposing him can turn it around quickly, but they will certainly try harder than Obama has and, I believe, do a better job than he has done so far.

Anyway, something more pleasant, the two little doggies Nattie and Pebbles were asleep downstairs a few minutes ago having dozed off while listening to you, Pebbles on a chair and Nattie on the footstool in front of the chair. A photo is attached which I hope you will like. 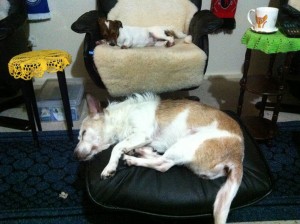