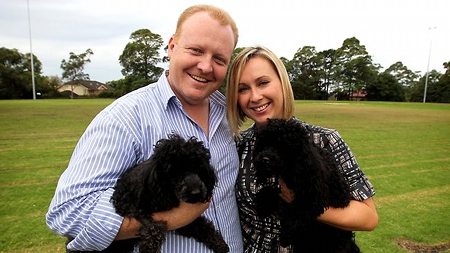 A big congratulations to Jason Morrison and Heidi Tiltins who today had their first child. Charles Edward Morrison (Morrison, Tiltins or both? I’m not entirely sure Edit: confirmed as a Morrison) was born today weighing 3.62kg. Jason’s radio station 2UE is reporting that Heidi and Charles are doing well, but Jason’s a bit worse for wear.

I was expecting that this would happen today when Jason didn’t turn up on the radio this morning, especially given that he has been talking about it all week.

Congratulations Jason and Heidi, may Charles bring you lots of joy for many many years to come. I suppose the next challenge is going to be introducing the dogs to their new mini-master. Good luck with that one! I’m really happy for you both…it couldn’t happen to a nicer couple.