Depending on how I feel after work this afternoon, I have two announcements that I wish to share with you. If not this afternoon, then tomorrow. But right now, two “bits” for you.

First up today, proof that being a fast walker is good for you [1].

The speed someone walks may predict the likelihood of developing dementia later in life, according to researchers in the US.
[..]
Suggestions of a link between slow walking speed and poor health have been made before.

A study, published in the British Medical Journal in 2009, said there was a “strong association” between slow walking speed and death from heart attacks and other heart problems. A Journal of the American Medical Association study suggested a link between walking faster over the age of 65 and a longer life.

Dr Erica Camargo, who conducted the latest study at the Boston Medical Centre, said: “While frailty and lower physical performance in elderly people have been associated with an increased risk of dementia, we weren’t sure until now how it impacted people of middle age.”

Brain scans, walking speed and grip strength were recorded for 2,410 people who were, on average, 62 years old.

Results presented at the Academy of Neurology’s annual meeting said that 11 years later, 34 people had developed dementia and 79 had had a stroke.

The researchers said slower walking speeds were linked to a higher risk of dementia and stronger grip with a lower risk of stroke.

I have always been annoyed by people who walk slowly, or to be more precise, people who walk more slowly than me which, unfortunately for some, includes most people who walk at what would probably be considered a “regular pace”, although it has to be said that an ingrown toenail has slowed my pace a little bit of late.

I have always been a fast walker. Mum, when I was in the early years of primary school, was a slightly faster than normal walker, and I had to move my little legs very quickly in order to keep up. As I grew up and the length of my stride increased, this quick movement continued and as such my walking pace increased.

My primary school held a walkathon once per year as a fundraiser. I always quite enjoyed this as it gave me a chance to walk quickly and demonstrate my fast pace for an extended period of time. In year three I took this quite seriously and for the week leading up to the walkathon I would spend part of my lunch break practicing. I worked out a course which I calculated was approximately a quarter of the length of the Walkathon course (the Walkathon was around the perimeter of the school grounds whereas my course was around a section of the bottom ovals) and would walk around it as quickly as I could for a certain period of time (20 or 30 minutes). After this I would then calculate how many laps of the Walkathon I could complete in the allotted time if I walked at the pace of my practice session.

From memory, I worked out that I could complete nine laps, and this was how many I did complete that year. As years went by, I would usually complete nine or ten laps, and unfortunately if one completed ten laps, one was not permitted to continue.

In high school, there was no Walkathon in year seven, but there was one in year 8 which went around the west basin on Lake Burley Griffin. This was an all-day activity and, of the people who did not cheat by cycling, skating or running (these things were allowed by the teaching staff so as to ensure the attendance and involvement of most students, as large sections of the event were unsupervised and it would have been quite easy for students to walk to Civic if they wanted to) I was the first to complete the course. Unfortunately this course was a bit too long for most students to complete, and probably a bit too public, so in years nine and ten, the Walkathon was held around the bases of Mounts Ainslie and Majura, with an extra activity for the keen runners to run up Mount Majura. This course allowed staff to use shortcuts (which were blocked for students by staff-run checkpoints) which allowed them to more easily keep an eye on students. I continued my track record of fast-walking success in these Walkathons.

Unfortunately, possibly because it was impossible for teachers to actively monitor it, no awards were handed out for the first person to complete the course, or indeed for the first walker to complete the course…but I enjoyed it anyway and, as was usually the case for school sporting events, I ran my own imaginary television and radio coverage of it. I couldn’t really commentate on the Walkathons much as I needed my breaths for walking and not talking, but the other commentators continued in my head (and for the psychologists out there, yes, the radio does talk to me, that’s because it’s talk radio…and yes, it does tell me to do things: to buy stuff mostly).

In more recent times, dog-walking has kept me walking quickly, although Nattie tires quickly these days, so the fast walking doesn’t last long on those any more.

Towards the end of 2008, a colleague at 1WAY FM, most-mornings host Alison Goodwill, informed me that she had seen a photo of mine in the Canberra Times. She asked if I was aware of it and if I had been paid for it. On both counts the answer was “no”, but that was OK as most photos on this blog are allowed to be copied if attribution is given…none-the-less, I was curious. Alsion was unable to provide many details about when the photo had been published but did say that it was a picture of mountains, possibly of the Brindabellas. I was confused by this as I could not recall taking a decent photos of the Brindabellas at any time…I did take a photo once which was supposed to be of the Brindabellas but instead became a photo of roads and powerlines, with the Brindabellas off in the distance…I didn’t think it was likely that this photo had been published. 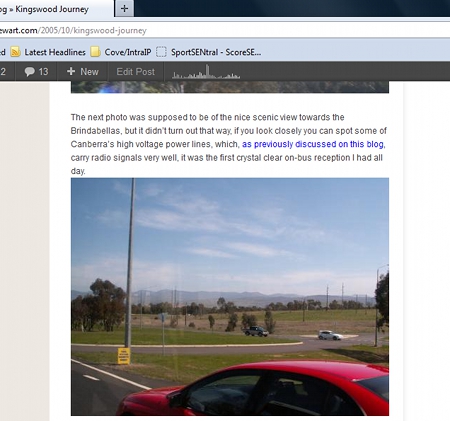 The photo which I didn’t think had been published in the Canberra Times, from my 2005 blog post Kingswood Journey [2]

Regardless, I was curious, and decided to go and check the Canberra Times archives at the National Library. I had to wait a while for the editions of the Canberra Times from late 2008 to be made available, but a few months later (I think it was in late 2009…I received a phone call from a friend as I was leaving the Library that day, but I don’t recall enough other details about the day other than it being a warm day to be certain) I went to the National Library and searched through a few months worth of the Canberra Times, but could not find any reference to me, or any photo which looked like it could have been taken by me.

It continued to bother me, and I did go back on another occasion for another look, but was once again unable to find anything.

Fast-forward to this year, and a few weeks ago I was archiving the old photo gallery [3] (a blog post is coming about that as I have some technical details about the process which may be of interest…unfortunately it is a blog post which may take me a little bit of time to write and so it may be a few weeks until I can find the time to make it happen) and did a Google search for “photos.samuelgordonstewart.com” as I wanted to find a few direct links to various pages of the photo gallery so that I could test them and correct an issue which I was encountering. When I did that, I found a rather unexpected result on page 2. 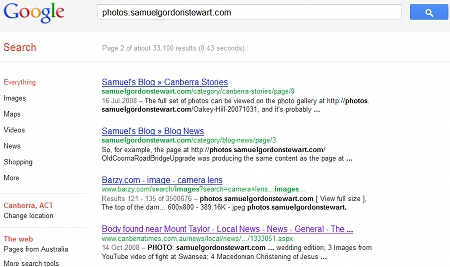 The one at the bottom of that lot, to be exact.

I followed the link, which took me to a Canberra Times online article from the 14th of October, 2008, titled “Body found near Mount Taylor [4]“. 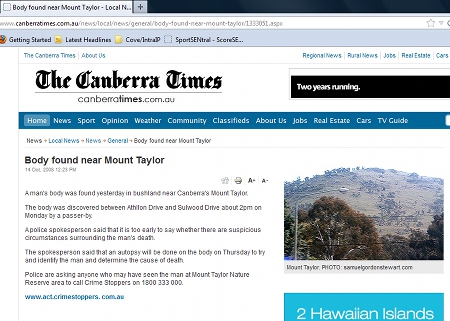 See that photo over on the right? 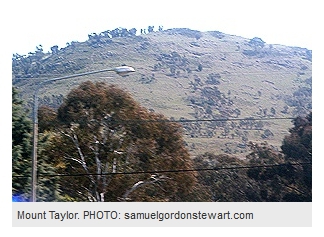 When I saw it, I recognised the photo straight away, even though the quality of it on the Canberra Times website is lower than the original photo. The photo in question is this one: 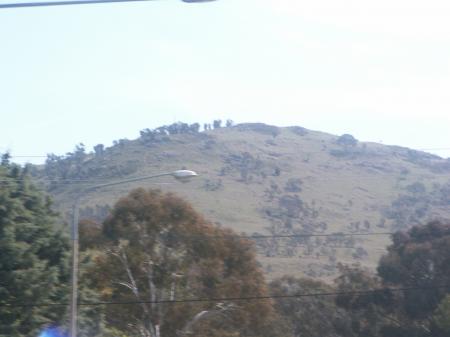 Somewhat ironically, this happens to be the photo directly above the photo I mentioned earlier in the Kingswood Journey blog post from 2005. 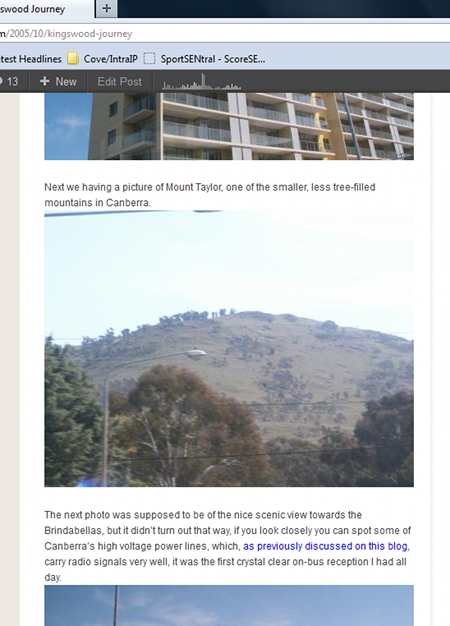 Even though I was in the middle of another, somewhat more important task at the time, this excited me so I jotted down the date of the Canberra Times article and went on another trip to the National Library to see if I could find the photo in the paper. It took a little while, but I found the page in question. Page 9 of the October 15, 2008 edition [6]. 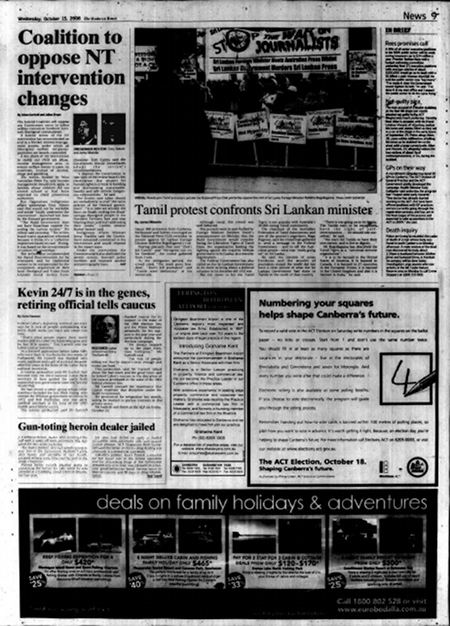 As you can see, my photo is nowhere to be found. In fact, my photo isn’t in there at all. The article is though…it’s a brief story at the bottom of the column at the top-right of the page. 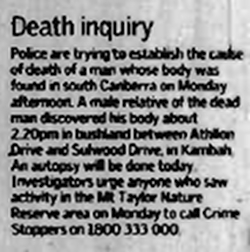 So, after a tad over three years of mystery, it turns out that my photo was never used in the paper, but was used on the website of the Canberra Times to illustrate a brief story. I was given incorrect information, which is why I was unable to find it originally, and yet strangely was only one photo off in picking the photo which I thought may have been used.

I am quite amazed that photo which I took from a moving bus, and which really isn’t the most wonderful photo in the world, was the best photo that the folks at the Times could find of Mount Taylor at the time. It’s also slightly flattering in a strange way as well.

And with the case closed, I bid you a wonderful Sunday!