Yesterday’s protest in which Prime Minister Julia Gillard and Opposition Leader Tony Abbott were effectively held hostage in a cafe by Aboriginal Tent Embassy protestors was a disgrace. It confirmed virtually everything Tony Abbott had said about it being time to move on from this ridiculous ongoing protest shanty town.

While I respect the rights of people to protest peacefully, yesterday’s scenes proved beyond all reasonable doubt that the Aboriginal Tent Embassy is not a protest movement in favour of peace and reconciliation, but is instead a protest movement aimed squarely at highlighting and supporting differences between Australia’s democratic and “western” culture (which is supported and embraced by a large majority of Aborigines), and a perverted form of ancient Aboriginal culture where Aborigines want to live in violent, no-modern-convenience societies while still being propped up by the taxpayers in the society that they want to destroy.

I’ve been over this ground many times before, so I won’t go in to the whole argument about how wrong the Aboriginal Tent Embassy is, or my solution to the rift between some Aborigines and the rest of society. Instead, I’ll focus on yesterday’s protest, today’s subsequent protest, and where I think this is headed.

The Aboriginal Tent Embassy has been irrelevant for ages. We have barely heard from them in years and years, and yet yesterday hundreds of them were there to hold a protest. Yes, yesterday was Australia Day and yes, it is to be expected that they would hold their usual “invasion day” nonsense, but it normally doesn’t happen with the sort of numbers we saw yesterday.

It is not unusual in the slightest to see the Left come out in support of the Tent Embassy in the media…not in the slightest, but normally the Left don’t support violence or hateful comments against Julia Gillard, and yet, they are defending this [1]:

Protester Gwenda Stanley of Moree almost tried the shoe [Julia Gillard’s shoe which fell off in the altercation] on before changing her mind. “I don’t want to walk in the shoes of a dead woman!” Ms Stanley joked

That same shoe, which was for all intents and purposes, stolen, is now being auctioned off on eBay. Proceeds of crime? Death threat, joking or not?

And look who has the shoe and is auctioning it off…Tent Embassy elder Pat Eatock. 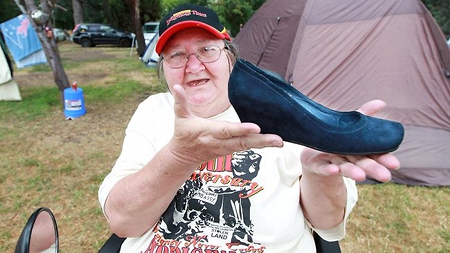 Now, thanks to a court ruling last year (the case that Andrew Bolt lost [3]), I can’t discuss how much of Pat Eatock’s heritage is Aboriginal. In much the same way that it is illegal to camp opposite Old Parliament House, I can’t discuss Pat Eatock’s heritage…the difference though, of course, is that for one reason or another, the law seems to not apply to the Aboriginal Tent Embassy’s occupants, and they have very little respect for the law, or the country itself anyway, as today they went and burned the Australian flag [4] outside Parliament House, because for some reason they can’t understand why people are upset with them over yesterday’s disgraceful incident.

But not everyone is against them. Leftist blog New Matilda (I thought it had shut down…apparently not) has come out in support of yesterday’s violent protest [5]. They claim that it wasn’t violent (or that the police who were protecting Julia Gillard and Tony Abbott as they ran to a car, were the ones who were violent), and that it’s a giant media conspiracy to claim that there was any violence (the statements seem contradictory, but they’re both in there).

So, let’s look at what happened yesterday. There was chanting, which is acceptable.

There was an angry mob surrounding a cafe and banging on the windows of said cafe…the windows were for all intents and purposes the walls of the cafe and there was genuine concern that the glass would break at any moment. Intimidation…illegal. Property damage…illegal. Detaining people against their will…illegal. This counts as violence in my book.

Then there were the attempts to block the path of the police as they hurriedly escorted Julia Gillard and Tony Abbott to a waiting car…maybe illegal, maybe not, but definitely wrong and intimidatory.

Julia Gillard tripped during the scurry to the car and she lost a shoe. The shoe was then taken by the Aborigines and a death threat was made against the Prime Minister. Illegal.

The shoe is now being sold. Selling stolen property is a crime.

And despite all of this, the Left still support the protest.

I don’t think any of this is a coincidence. I think the plans were drawn up after Andrew Bolt lost that court case last year.

It’s pretty simple really. The Occupy movement has gone nowhere in this country. There’s a handful staying in Martin Place in Sydney just so that they can remain in the background of Channel Seven’s Martin Place studios, but elsewhere they are almost non-existent or in such small numbers that people would mistake them for homeless people (which reminds me, last year a large number of Homeless people in the U.S. said that they wanted to reclaim the parks from the Occupy crowd). To maintain a minor position in the public consciousness, the Occupy mob occasionally camp out overnight in a place where that is prohibited, so that the media will report on their arrest.

Here in Canberra, Occupy had perhaps a dozen people on the first day, but they didn’t stay for the night and didn’t bother to turn up the next day. Their biggest problem is that most areas near Parliament do not permit camping…but there is one site where a group who claim to have a particular ethnic heritage are permitted to camp illegally…the Aboriginal Tent Embassy. And the court case last year just gave every white person in the country the ability to claim to be of Aboriginal heritage without ever being questioned about it.

Both the Tent Embassy and the Occupy movement were increasingly irrelevant forces in this country last year, but with that court case last year, an opportunity arose for Occupy to set up camp outside Parliament on the same site as the Tent embassy. They couldn’t just move in though…that would be too transparent. Instead, a plan had to be drawn up.

Australia Day is always a day of protest for the Tent Embassy, so nobody would be likely to bat an eyelid if the protest was a bit larger than normal as it could be put down to people giving them more support, especially if you can get some left-wing academic to claim that flying the Australian Flag is a racist act [6], just a few days before Australia Day (The Sydney Morning Herald seems to have pulled that article, but the ABC still has it online…attempts to rewrite history perhaps?). It is also predictable that, on Australia Day, a politician would make a comment about Aboriginal affairs and the Tent Embassy. It’s not hard to twist any statement on the matter to suit the agenda of the Tent Embassy, and that’s what they did with Tony Abbott’s comments. The protest could then be about whatever comments were made by a politician on this “ever so sensitive day for Aborigines”.

What couldn’t have been predicted was how lucky the protestors would get. They would have known that Julia Gillard would be near their protest, and picketing her would have been a big news story by itself…but for the object of their derision, Tony Abbott, to be there too…well they really did hit the jackpot. They were able to set up a hostage situation while keeping just enough distance for it to not be considered as one. They then followed through on the rest of their plan of making inflammatory statements and letting the media run with it.

What happens after that will probably depend on how the rest of us react and how our politicians react, but have no doubt, this whole thing was heavily planned and orchestrated, and we have only just seen the start of it.