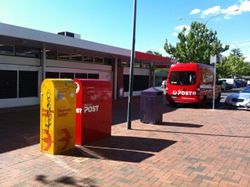 Yours forthwith and with the appropriate amount of deference and friendly thoughts and wishes,
The Undersigned

With the exception of the photo, which was not included in the original message, this is a message which I sent earlier this afternoon, having been inspired to an extent by the convoluted conversation which the post office staff were having about counting money and how the post office’s policies affect the counting of money. The photo, which was taken a few minutes after the message was sent, was added to provide some context as to who these “agents of the government” are.

For what it’s worth, “agent of the government” is a term Leo Laporte uses in his live-read commercials for stamps.com where he talks about a post office employee coming and picking up whatever it is that you are trying to post via the services of stamps.com. It’s a good description of post office employees.