Urgent Update 6:55am: Conflicting reports as to whether Rep. Giffords has died or not. Reports suggest that up to six people have died, but I can’t give you a definitive answer on the status of Rep. Gaffords. Hopefully she is alive and pulls through. End Update

Further Update 7:53am: Thankfully Rep. Giffords is alive. She is in a critical condition, but it is wonderful that she is alive, and I hope she makes a full recovery. Sadly not everyone was so lucky as FOX News reports:

At least 19 people were shot at Gifford’s “Your Corner” event held outside a Safeway grocery store in Tucson, including three members of the Democratic congresswoman’s staff in Arizona. Five have died, including one of Gifford’s aides, and nine are in critical condition at the University of Arizona Medical Center.

FOX also notes that police are looking for a possible second suspect in the shooting. Now clearly it is up to the courts to decide on guilt, but let me say right from the get-go that this is the sort of crime which deserves the death penalty. If somebody is found guilty of being the shooter or being involved in the shooting, then they lose all of their rights to being a part of our society in my view.

In the meantime though, my thoughts and prayers continue to be with all of the victims and their families.
End Update

Urgent Update 6:37am: I’m very sad to have to report that Gabrielle Giffords has died as a result of the shooting. This is utterly tragic. My most sincere condolences go out to Mrs. Giffords’ family, friends and colleagues. I have no word on the condition of the others who have been shot at this stage…I can only hope that they recover. End Update 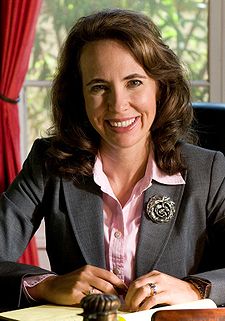 Some very disturbing news in from Arizona. Congresswoman Gabrielle Giffords (Democrat-Arizona) has been shot in the head and has been rushed to hospital.

Arizona Rep. Gabrielle Giffords was shot along with three of her aides by a gunman Saturday morning outside a grocery store in Tucson while holding a public event, Fox News has confirmed.

Twelve others were shot as well at Giffords’ “Your Corner” event held at Safeway. The gunman is in custody.

Giffords was taken to a hospital but the condition of those shot was not immediately known, a senior congressional aide told Fox News.

The three staffers who were shot worked out of Giffords’ Arizona office.

Giffords has held multiple “Your Corner” events over the past four years, the aide told Fox News, adding that she had held three previous events that this venue before.

Investigations are obviously ongoing, but given the fact that Mrs. Giffords was shot at a public event which she has held at this location a number of times prior to today, it’s hard to escape the conclusion that this shooting was a deliberate crime of hatred, probably politically motivated…and almost certainly the action of an unhinged person. This is deplorable, and one can only hope that the responsible person is brought to justice and has the full force of the law thrown at them.

To Mrs. Giffords, her family, and everyone else who has been injured in this horrifying act, my thoughts and prayers are with you. May you all recover thoroughly and quickly.