I’ve been keeping an eye on the 2GB website all week so that I can spot changes which might indicate that Jim Ball’s profile will make a reappearance, and was struck by something this morning. Ray Hadley’s profile picture has changed to include his glasses. This might not seem very important and, quite probably it isn’t, but it occurred to me when he came to Canberra in late February that he wears the glasses a lot and in my view looks better and more professional wearing them.

As far as I can tell, the photo on the 2GB website changed overnight although it might have changed the day before as I can’t recall whether I spotted his photo on Wednesday. His old photo is still up on the 2CC website, but I really do think the new photo is more flattering.

Here’s the old photo as taken from 2CC’s website: 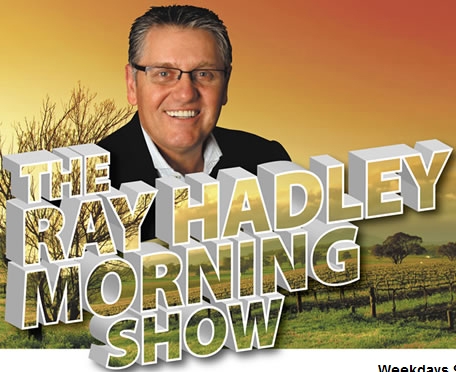 I think this is a much better photo and, whilst it may be a “studio” photo, it is much more reflective of Ray’s natural appearance than the old photo. As an example, here’s a photo of me with Ray at the 2GB/2CC outside broadcast at The Mint on February 22: 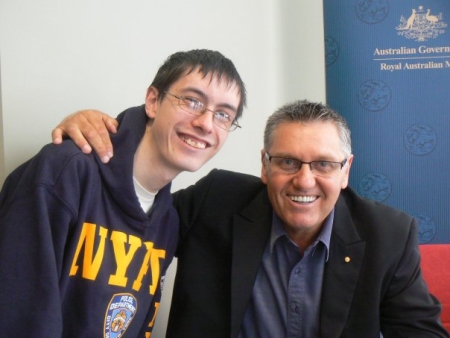 I don’t know why, but I find photos of radio people quite fascinating. There’s that phrase “head for radio” and I think that, rightly or wrongly, a lot of people in radio believe that it applies to them and shy away from official photos, effectively causing the photos on radio station websites to often be much less appealing than the photos taken by fans in public. Jim Ball’s 2UE photo was a good example. Jim’s photo, like the rest of the 2UE profile photos, was taken in the station’s lobby and on its own was OK:

But in my view was not as good as the more natural photo from his old 2GB profile: 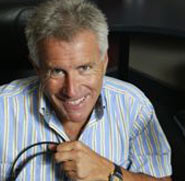 Unfortunately I don’t have a copy of the photo as it appeared on 2UE’s website (the one above is from 2CC’s website), however it was rotated a bit and, sadly, his 2UE profile photo when rotated slightly has a knack of making him looking slightly insane which I thought was most unfortunate for a man of his intellect.

Update: Many thanks to reader Nathan for sending through a copy of Jim Ball’s 2UE profile photo. It looks like I may have been confused about the origin of some photos as the 2UE profile photo is different to the 2CC profile photo, and I now have this vague memory of the photo of Jim on his page on 2CC’s website being from one of the 2UE studios rather than the lobby like his 2UE profile photo.

Anyway, the point is, thanks to Nathan I can now share that photo with you. 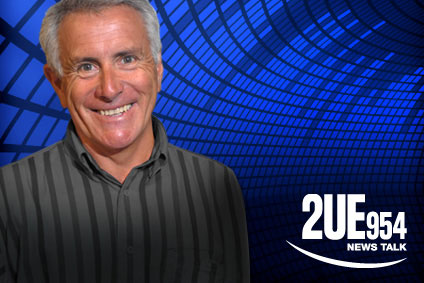 Some of the smaller versions of this photo (the one on the header of the New Day Australia page where he was Photoshopped in next to John Kerr springs to mind) had Jim’s head on less of an angle. Unfortunately, as I mentioned earlier, when you shrink the photo and rotate it a bit, Jim looks slightly insane, which seriously irked me. It’s probably due to the reduction in detail in the photo removing some of the details of Jim’s smile.

I’m looking forward to seeing Jim’s profile on the 2GB website (and the 3MTR website) when it appears. I wonder if it will be a new photo or his old 2GB profile photo?
End Update

Meanwhile, when I was looking through the 2GB website earlier and noticed the temporary profile page for “The C Team”, a show which 2GB are putting on tonight to fill time due to the NRL starting an hour later than usual, I was reminded of something which my Year 4 teacher Jay Busch said to the class about not trusting spell-check. 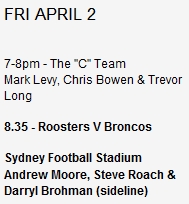 Oh, Mark Levy…oh I see! I wonder what they typed to have spell-check suggest “level” to them…it can’t have been “levy” as that’s a word; “levl” perhaps?

It’s a tiny mistake and not in the least bit relevant to Ray Hadley’s glasses…but it gave me a good laugh so I couldn’t stop myself from sharing it. Consider it a Friday Funny if you like.

Thanks Samuel – Poor Mark – you’re spot on, Levy it is, but it’s a bit of fun, no big drama… I’m sure it will be fixed if we ever appear on air again!

[2] has also been updated with the new photo of Ray..

Just looking now and Mark’s name has been fixed. It gave me a good chuckle. Sounds like it gave you all a bit of a chuckle too.

I hope they bring you all in again. I’m quite enjoying The C Team!