Update: I’m being told by somebody else now that 2CA are not covering the AFL. I can’t think of a good reason for either party to lie to me, so I’m more than a tad confused by the whole thing. I’ll update this again if and when more details come to hand. End Update

I can’t remember if I wrote anything about 3AW dropping Rex Hunt from their AFL commentary team. I remember writing that I would not be listening to 3AW if they went ahead with it, but I can’t find any proof that I ever wrote anything after they announced that they would actually be dropping Rex.

At the same time, 3AW and Triple M swapped commentators. Rex will be calling football for Triple M on Saturday afternoons, and Brian Taylor will be going to 3AW (eep, they can keep him). Taylor will be joined by Tim Lane, further cementing my decision to steer clear of 3AW this year. 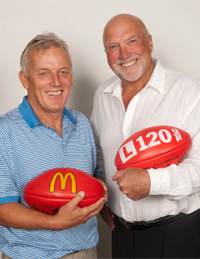 I was pleased to see Rex sign with Triple M…but I’m even more pleased to see him sign with Crocmedia who, along with 3AW, have the commercial radio relay rights for the AFL. Crocmedia, who will be basing their operation in the studios of 3BA Ballarat, have signed both Rex Hunt and Sandy Roberts.

One of things which disappointed me when Seven regained the TV rights was that they didn’t bring Sandy Roberts back to the commentary box despite Sandy being their prominent sport presenter on Seven News Melbourne and presenter of various highlights programs. This sense of frustration has been increased of late due to the fact that I have enjoyed Sandy’s commentary on the overnight AFL replays on 7Two.

Needless to say, I was therefore absolutely delighted when I found out that Sandy Roberts had signed with Crocmedia along with Rex Hunt. Sandy will call Friday night and Saturday afternoon matches, while Rex will lead the commentary on Sunday afternoons.

Alas, I’m informed that Crocmedia will not be able to stream their coverage online, however they do have a growing network of relay stations which will be taking their coverage. The great news for those of us here in Canberra is that 1053 2CA will be taking the Crocmedia coverage, although I’m not sure at this stage which matches they will be covering. I’m hopeful that they will cover it as much as they did back when they relayed 3AW a few years ago…Friday night, Saturday afternoon and Sunday afternoon. I’ll let you know when I find out more.

(A side note to Capital Radio management: this information was not obtained at the Ray Hadley OB on Friday, which can be confirmed by a quick look back through my Facebook status updates. You will see that I first learned of this mid-last week. I won’t reveal how I came by this information though.)