So Earth Hour is upon us again at 8:30 tonight. Thankfully though this year there is an organised call to leave the power running to celebrate Human Achievement Hour which, through no coincidence, is on at the same time as Earth Hour. Whilst technically Human Achievement Hour is just an extension of what I’ve been saying for years (as have others before me) and that is that at least some of us should turn lights on to help keep the power grid operating normally…just leaving your power on and going about your normal life and taking advantage of the human achievements which have contributed to our great standard of living is good enough.

Global warming arguments to one side (because we all know my stance on the fraud that is anthropogenic global warming), think about this from another angle…your wallet. Large sudden drops in the amount of energy consumption cause the voltage in the power grid to increase, and can cause damage to the power grid, and who do you think ends up paying to replace damaged equipment? Yes, that’s right, you, through higher electricity prices. In fact, thanks to Earth Hour, you’re already paying more [1] as power companies have had to budget for extra staff time to prepare for the sudden drop in consumption, thereby ensuring that we don’t all end up in a permanent Earth Hour.

With lights set to go out again tonight from 8.30, the Australian Energy Market Operator (AEMO) has taken precautions in recent days to ensure that Earth Hour does not prompt a breach of its operating standards.

The sudden drop in demand for electricity caused by Earth Hour can cause a spike in the frequency and voltage rates coursing through the electricity network, and there are strict operating limits for both that must be observed by AEMO.

Frequency rates relate to the speed at which power travels through the grid, and exactly five minutes before Earth Hour begins tonight, AEMO will start a 20-minute dispatch of extra frequency control services to prevent an unwelcome surge in frequency.

AEMO has also decided to operate transmission voltages at the lower end of the usual scale, in a bid to manage the rise in voltage that comes in tandem with the reduced demand for electricity.

Now, of course, Earth Hour sponsor Fairfax would never use the word “damage” but it doesn’t take a genius to work out that with all those good ole baseload power plants (coal, nuclear etc) producing a consistent stream of energy (something which “renewables” like wind and solar still can’t do), if the consumption decreases and the production stays the same (which it does as it takes time to adjust large power plants), then the excess has to go somewhere, and that somewhere is likely to be the sensitive equipment which distributes power, or on a smaller scale, the sensitive compressor in your fridge.

I personally support the idea of turning on everything I can find (see one of my previous efforts [2] for an example) as, despite the number of people who believe in this anthropogenic global warming nonsense decreasing every day, some people do still believe, and they’re as zealous as ever. Those of us who are turning things on are helping to balance out the energy fluctuations caused by those who will turn everything off, and are therefore helping to protect the power grid.

That said, I applaud anybody who simply goes about their normal business during Human Achievement Hour, as you’re doing your part to keep the power grid safe as well.

Sadly this year I won’t be in a position to turn everything on as I will not be at home, but I will be increasing my energy usage anyway. I’m attending an event where a nice big generator will be providing power in a spot which is not on the power grid, and I will have to drive there and back, plus use extra power to record The Bill and then keep the lights on to watch it after I get home.

If I wasn’t going out, then as I said to Mike Jeffreys yesterday morning, I’d be quite happy to replace all of my compact fluorescent bulbs with the hungrier incandescent bulbs for the hour.

I am quite pleased to see though that this year, more people seem to be taking my stance. I’m pleasant surprised by the overwhelmingly positive feedback which I’ve received over this on Facebook. Normally my anti-Earth Hour message leads to me having to spend a day or two defending my position. So far, it looks like the need for me to defend my stance and educate the masses is smaller than in any previous year…people are getting the message that anthropogenic global warming is a crock.

Regardless of what your plans are tonight, I’m just going to echo the sentiments of the Conservative Leadership Foundation [3] and say to you “Don’t be stuck in the dark with the communists. Turn your lights on!” 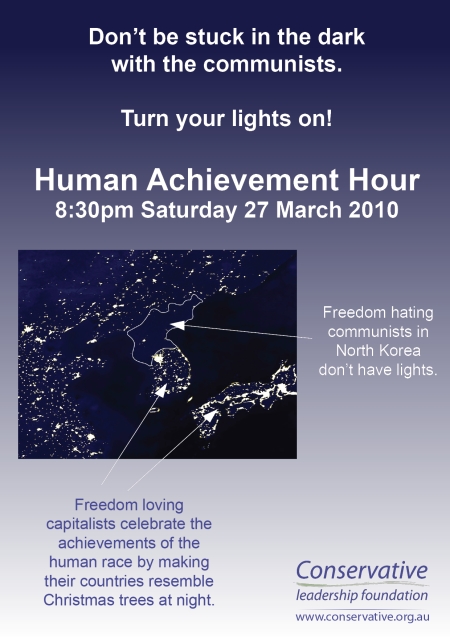 Comments Disabled To "Just leave the power on at 8:30 please"

I sympathize with this view and recognise my spite over the silliness of this rejection of the pleasures of modern conveniences. We are in this miasma because of politicians in the thrall of misinformed and misguided environmental lobby groups (ELGs) and the EPA, a very radical organisation.

ELGs have an overwhelming power of the podium and very little basic useful knowledge. Nearly every motion and movement has unintended conseqences. The unintended consequence of recycling, for instance, or dependence on gas over coal is popping up everywhere.

I recently watched a news magazine article on the recent cold stress on the Florida manatee. Floridians have been working to save the sluggish manatee for generations. One new threat is the switch from coal fired power to natural gas at Tampa Bay. This has resulted in the stress on the animal due to the removal of a source of warm water from the coal plant cooling towers. For those of us not sucked into the CO2 misinformation freight train, this is unconscious politically correct behavior contrary to common sense. Manatees have been trapped this winter near the coal plant because of the warm water, and changing that unnecessarily will kill the animals. Moreover, clean coal, would be a better solution. Clean powerplants produce electricity, ashes, CO2 and water vapour;and do it cheaper than natural gas. Since CO2 is not a significant greenhouse gas, this is an unintended consequence.

The hubris that human activity to the extent of 2% of a trace gas is obvious, and a small cohort of ELGs (in proportion to the silent majority) and politicians in their thrall are killing these animals. Another unintended consequence is predictable, government competition for natural gas demanded by ELGs will drive up the cost of natural gas for everyone else. For what?