Some of you may have noticed that Mick posted a comment yesterday [1] asking me to “explain why we just had the 2nd warmest year on record and the warmest decade?” which, in many ways, I am thankful for. You see, the farce of hot year/decade alarmism is a story which I noted while I was away last month (along with about four or five others) which I never got around to writing about (again, like the others) and Mick reminded me of it, prompting me to more-or-less write the story as a reply to his comment.

It deserves a wider audience than being a mere comment though…so I’m posting a slightly updated version here to share with you all.

The simple answer to why the last decade has been measured as being the hottest on record is the after-effects of the el nino event in the late 1990s stayed with us for much of the decade. As it happens, much of the decade was above average, but was not rising. Temperatures overall have not risen since the el nino event, and have in fact dropped in recent years. The complex answer is much more convoluted than that, but can still be boiled down to that simple answer.

If you’re interested in a full summary, take a look at http://wattsupwiththat.com/2009/11/10/countdown-to-an-unprecedented-warm-decade-2-months-to-go/ [2] which, back in November before the UN started making noises about hot years and decades, examined how el nino affected the temperature record and, if the el nino affect is taken out of the record, the temperatures were quite normal.

You may also be interested in some information about how the temperature records have been altered to “hide the decline” (to quote the leaked CRU emails). http://wattsupwiththat.com/2009/12/08/the-smoking-gun-at-darwin-zero/ [3]. This quite clearly shows that a number of methods used to “adjust” the temperature records are erroneously inflating records so that instead of showing their natural downward trend, they show an upward trend.

There are a couple follow-ups to that post as well. A search for “Darwin zero” [4] on Watts Up With That will show them to you.

I’m also trying to find the graph which shows global temperatures but I don’t think the monthly update has been issued yet…and I’ve misplaced the end-of-November report. That said, the US data is interesting: 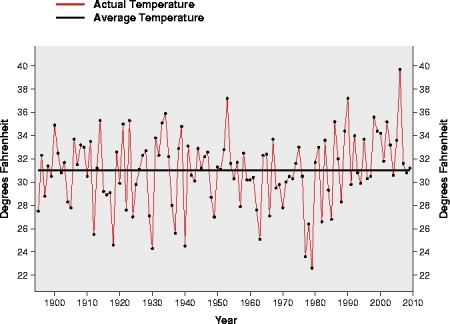 [5]
(click to enlarge)
source: http://www.ncdc.noaa.gov/oa/climate/research/cag3/na.html [6] — change the end year to 2009 and hit submit. I’ve also unticked the trendline generation from this graph as it appears to be drawing a straight line from one end of the graph to the other…something which is completely useless on any graph with variable up and down points. Direct point-to-point trendlines are only accurate on graphs which only go up, only go down, or do not move at all. They are generally misleading on variable graphs.

An honest analysis of that data would say that we’ve really just been recovering from an abnormally cool temperature in the 1970s, we were then hit with el nino warming, and we’re just cooling off again. In fact, that graph shows something even more interesting…the UN weather agency (admittedly using a different dataset) are very very wrong to claim that we just had one of hottest years ever. But I’m not surprised by it…the Australian Bureau of Meteorology claimed that 2008 was abnormally hot, a claim which is false. It’s funny how that press release never made it in to their online archives.

For a more in-depth analysis of that data (from a couple months ago) see http://www.worldclimatereport.com/index.php/2009/11/09/another-normal-year-for-us-temperatures/ [6]

Admittedly this is a huge answer to a simple question, and I apologise for not being briefer, however like most things in climate science, the answer is not as simple as the question.

Interesting statistics, and although it points to multiple El Nino events causing the ‘skewed’ results, but I don’t see evidence that we’ve had any more frequent or number of El Nino’s in the last decade.

Maybe I’m just reading the data incorrectly, but I can’t see how the El Nino from the late 90’s has had any effect on temperatures this decade.

This graph shows that not only have we had a number of La Nina events in the last decade, there have been more La Nina’s than El Nino’s

The fact is that El Nino’s and La Nina’s have been occuring for as long we have known, so I can’t see how this can be used as an ‘excuse’ for the latest figures.

I’m open to suggestions, but I don’t believe this one.

I just realised that the graphs and document used in that link are significantly old, so it is not an accurate example of the El Nino’s from the last decade.

I am trying to find more information on this…

It is only for the last 5 years, but all data is included in a table