The Canberra Times have an amazing scoop today. They have caught ABC TV’s head of news Craig McMurtie admitting to, uh, well, nothing [1]. 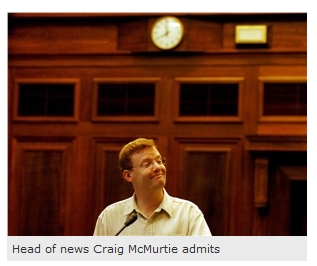 I don’t know how they came up with that caption, because Craig is only mentioned once in the article, talking long ago about events of long ago.

ABC News Coverage head Craig McMurtrie told Media Watch at the time the new system would ”benefit our editorial content” and the glitches were ”teething problems”.

I don’t even see how an image of Craig is relevant to the story considering that he is one of a number of talking heads in the story, and none of them are really relevant, pictorially at least, to the story of ABC TV’s Canberra newsroom adopting the Ignite automation system which has already been adopted in all the other capital city studios.

That said, if you’re going to have a picture for the sake of having a picture, then I suppose you might as well make it of a person who said nothing to you, and insinuate them saying nothing in the caption.