It’s a stark contrast to the full list of press releases sent out to media organisations this week:

There were also a couple correction notices, an update notice, and a not for publication media diary note.

Not only were most of these press releases not placed on the AFP website, they didn’t show up on the crimestoppers website [3] either. 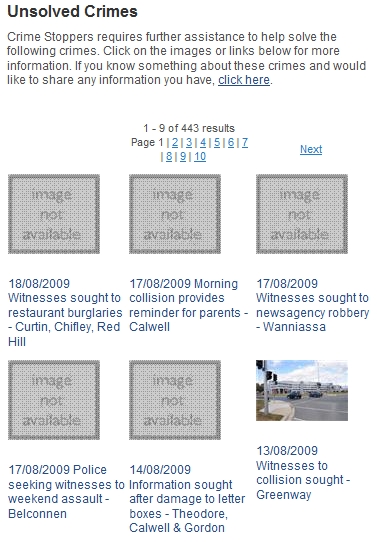 So what are people supposed to do if they hear a mention of one of these stories on the news, and want more details in case they are able to help? The full details aren’t online, and I’m sure police communications phone lines have better uses than reading press releases to curious citizens.

C’mon guys and girls…it’s not that hard. If you want the assistance of the public, you need to give them some information. Copying those press releases on to your website is the easiest way to do that.

Update 10:44pm: Oh that’s amusing, all of the missing press releases except for the one about the missing boy (who has since been found) have appeared on the AFP website. I’m glad to see them there, but somewhat amused that it seems to take either a whinge from me or RiotACT for them to appear.

Hopefully they will keep posting them online now, as it’s a valuable community service which they have previously proven that they are capable of providing, and I’d hate to have to setup a third-party website to do their job for them. That said, if I was to do it for them, I could do it for the often-late ACT Government press releases as well. I wonder if there’s a viable business model in this? End Update