Seeing as this blog post is related, I should say to all of those of you who guessed that my “major infrastructure investment” earlier this week was a car…congratulations, you were correct.

I love hitch-hikers. They often have interesting and somewhat random (and often alcohol induced) stories to tell, and occasionally (OK, rarely) they pay for their ride. This morning I had one of these rare paying hitch-hikers. When we arrived at their house, they asked me to wait for a few moments while they got “some coins” which were apparently going to be more than worth my while…they weren’t kidding.

After waiting for a couple minutes, the hitch-hiker returned with what looked like a small bucket, which they then took a couple seconds to empty in to the front passenger’s footwell. The coins covered the entire footwell, seemingly layers deep.

It took me at least five minutes to pick up the coins when I got home…and whilst half a (full size) bucket of coins is an exaggeration, the bucket is certainly heavy enough, and it is going to take me quite some time to count.

This leaves me pondering a couple questions though. The coins are obviously worth a fair chunk of money, so how drunk was this hitch-hiker? And will they regret giving away so many coins when they wake up later today.

Secondly, who keeps large amounts of coins of all denominations, in buckets?

I’ll weight the bucket once the bathroom is (and the scales are) free. I’ll count the coins later on today. I’ll report back on both counts.

Further Update 5pm: Having spent the better half of the afternoon counting coins, I can confirm that the coins are as follows: 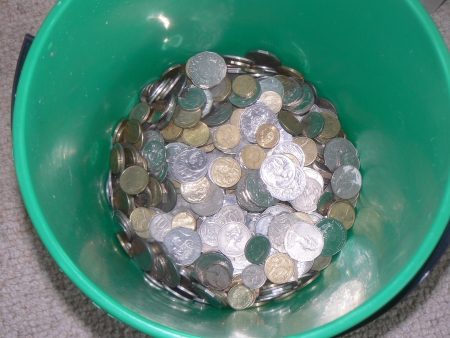 I took this hitch-hiker from Barry Drive to Weetangera, a distance of about 7 kilomteres, which makes the cost of the journey a rather ridiculous amount of $114.87 per kilometre, or 11.5 cents per metre. To the same extent, the trip took about ten minutes, which is a pay rate of $482.46 per hour.

That was certainly a very generous hitch-hiker. 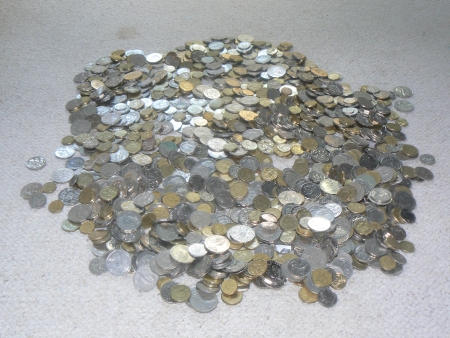