Originally my plan was to wipe out my debt with the $900 stimulus payment (which hasn’t arrived yet…which is most annoying as when it arrives my net worth, not including debts, will be somewhere in the range of $905). Unfortunately I’m no longer in a position to do that, although I’ll probably have to use some of it to keep my debts in check. At the moment I’m really only in a position to hoard most of the payment and treat it as income rather than a spending spree. 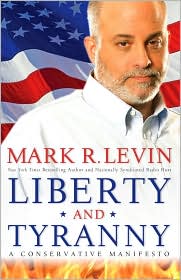 That said, there is one thing which I will be spending money on. It’s US talk radio host Mark Levin’s new book “Liberty and Tyranny: A Conservative Manifesto [1]“, and in the spirit of the stimulus payments I will see if any of the local book stores can get it in quickly…but if they can’t I’ll just buy it from Amazon…and probably buy two in order to make the shipping worthwhile. That way I can keep a copy for myself, and give away a copy to somebody on this blog through some form of competition.

I’ve heard Mark talk about the book on his show (although I don’t hear much of his show so it was only brief) and I was very interested by the hour that Sean Hannity dedicated to interviewing Mark about the book. As a “Hannity Insider” I was able to get my hands on the audio from that interview without ads (although I’ve left Sean’s live-read ad in…it’s the least I can do in exchange for publishing an hour of his show here). If you’ve got 36 minutes to spare (or even if you don’t) I’d recommend taking a listen as Mark outlines what’s in the book and why he wrote it.

Or if you don’t have time for that, enjoy Mark’s shorter chat with KXNT Las Vegas’ Alan Stock which goes for 16 minutes.
[audio:http://samuelgordonstewart.com/wp-content/MarkLevinBook-KXNTAlanStock.mp3]
Download MP3 [3]

Personally, I enjoyed both.

Incidentally, here’s the synopsis that has been sent out to book stores:

Product Description
Conservative talk radio’s fastest-growing superstar is also a New York Times bestselling phenomenon: the author of the groundbreaking critique of the Supreme Court, Men in Black, and the deeply personal dog lover’s memoir Rescuing Sprite, Mark R. Levin now delivers the book that characterizes both his devotion to his more than 5 million listeners and his love of our country and the legacy of our Founding Fathers: Liberty and Tyranny is Mark R. Levin’s clarion call to conservative America, a new manifesto for the conservative movement for the 21st century.

In the face of the modern liberal assault on Constitution-based values, an attack that has steadily snowballed since President Roosevelt’s New Deal of the 1930s and resulted in a federal government that is a massive, unaccountable conglomerate, the time for re-enforcing the intellectual and practical case for conservatism is now. Conservative beliefs in individual freedoms do in the end stand for liberty for all Americans, while liberal dictates lead to the breakdown of civilized society — in short, tyranny. Looking back to look to the future, Levin writes “conservatism is the antidote to tyranny precisely because its principles are our founding principles.” And in a series of powerful essays, Levin lays out how conservatives can counter the liberal corrosion that has filtered into every timely issue affecting our daily lives, from the economy to health care, global warming, immigration, and more — and illustrates how change, as seen through the conservative lens, is always prudent, and always an enhancement to individual freedom.

As provocative, well-reasoned, robust, and informed as his on-air commentary, Levin’s narrative will galvanize readers to begin a new era in conservative thinking and action. Liberty and Tyranny provides a philosophical, historical, and practical framework for revitalizing the conservative vision and ensuring the preservation of American society.

About the Author
Mark R. Levin is a nationally syndicated talk radio host and president of Landmark Legal Foundation. He has also worked as an attorney in the private sector and as a top adviser and administrator to several members of President Reagan’s cabinet. The author of the New York Times bestselling books Rescuing Sprite and Men in Black: How the Supreme Court Is Destroying America, Mark holds a B.A. from Temple University and a J.D. from Temple University School of Law.

Visit Mark Levin on the web at www.marklevinshow.com [4].