Or should that be “change that should scare the socks off us”?

You would probably be well aware that the US government passed the final version of President Obama’s stimulus package on Saturday morning Australian time, that’s no secret, but there does seem to be a secret here, a secret being kept from the Australian public at least.

Some of the US media have reported this but I haven’t seen it in the Australian media at all so far. Perhaps I missed it, or perhaps the Australian media were too busy with home affairs (and there have been a lot of them lately) to mention anything more than “US stimulus passed”, regardless, it’s unlikely that many Australians know that the way in which the US stimulus package was passed was in contravention of promises made earlier in the week by the Democrats.

I refer specifically to their promise [1] that bills would go up on a government website 48 hours prior to voting on the bills so that the public would be able to review said bills. Of course, we’ve been told by the Obama administration, that this bill needed to be dealt with quickly to avert an economic catastrophe, so if I take them on face value I could excuse them for not giving the public time to read the bill…but this thing is just under 1100 pages and Congress members were given less than 15 hours to sift through the bill before voting on it. 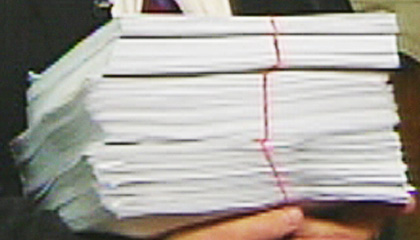 Television screenshot of the stimulus bill

The fact of the matter is, as House Republican leader John Boehner said in Congress as he threw the bill on the floor, “not one member has read this”.
[audio:http://samuelgordonstewart.com/wp-content/JohnBoehnerUSStimulus.mp3]
Download MP3 [2]

It hardly matters if the Democrats have a majority or not, the fact is that not a single person who voted on this bill, who voted to spend more than a trillion Australian dollars, read what they were voting to spend the money on.

As Congressman Mike Pence from Indiana said to Sean Hannity on his Friday show when asked if he had read the bill “Oh heavens no! [..] We didn’t have any more than twelve hours to look at this thing, and as Connie Hair of Human Events wrote this afternoon [3] it wasn’t even put on the Internet in a searchable format.”

Ms. Hair elaborates in her article:

Instead of publishing the bill as a regular internet document — which people can search by “key words” and otherwise, the Dems took hours to convert the final bill from the regular searchable format into “pdf” files, which can be read but not searched.

Three of the four .pdf files had no text embedded, just images of the text, which did not permit text searches of the bill.

Congressman Pence told Hannity that the Republicans had staffers looking over the bill for problems, but there just was not enough time to read through it.

Analysts told the Associated Press [4] that the stimulus package will not kick-start the economy, Brian Bethune from IHS Global Insight even went so far as to say that the way to make it more effective is with bigger tax cuts rather than more spending…which is exactly what the Republicans have been rallying for, exactly what Congressman Pence told Hannity, and exactly what the Democrats refused to do, instead throwing money at such wondrous pet-projects [5] as green golf carts ($300 million), “state fiscal stabilisation” bailout ($39 billion incentive to mismanage states on the basis that the feds will fix it all up later), the Smithsonian Institution (not quite a pet-project, but $75 million for museums…not exactly an economy fixer) and abandoned mine sites ($650 million…talk about throwing money down a hole).

And if you think that this is just Republican sour grapes…well explain this to me: seven Democrats voted with the Republicans in the congress against this stimulus package. Clearly they weren’t comfortable with approving a bill without enough time to read it…or perhaps they were sounded out about the contents and just couldn’t bring themselves to vote for a bill which throws so much money at things which won’t help the economy, at the expense of things which will.

And all of this after the series of tax cheats [6] in (or almost in) the cabinet, and all of the lobbyists (of which we were promised there would be none) and Blagojevich, the man alleged to have attempted to sell Barack Obama’s senate seat, and Nancy Pelosi claiming that every American will lose their job one and a half times every month (see previous link).

Oh yes, this is truly change we can believe in.