It seems that stray hairs are very good at confusing the chroma key on Nine News. Last night both of the female presenters’ hair managed to confuse the effect, making bits of the green screen quite visible.

It seemed to only occur where hair wasn’t in a dense bunch, and at first I thought the gorgeous Stephanie Brantz had decided to get the hair on the back of her head coloured green, but when I thought about it for a moment I realised that this would have made the hair invisible on the broadcast. My suspicions were confirmed when Kellie Connolly returned to screen with a faint green outline. 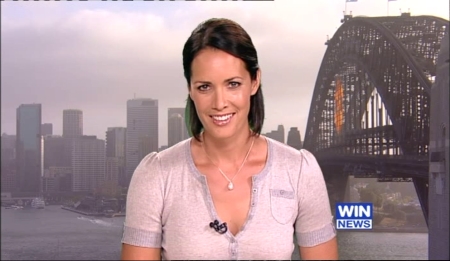 Stephanie is looking as wonderful as usual, however if you look to the left of her head you will notice a large section of green interlaced with hair, and a small amount is visible to the lower right of her head as well.

Kellie Connolly had the same (albeit slightly less noticeable) problem: 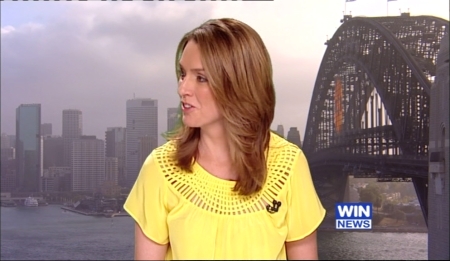 This is something Chris Bath over at Seven doesn’t have to worry about. Seven use a real set with a television (edit: projector, apparently) behind the presenter, so Chris can have as many stray hairs as she likes without any risk of confusing the chroma key effect. Only the weather presenters have to worry about it.

Interestingly, the consummate weather man Mike Bailey didn’t have any stray hairs, and as such was not plagued by green outlines: 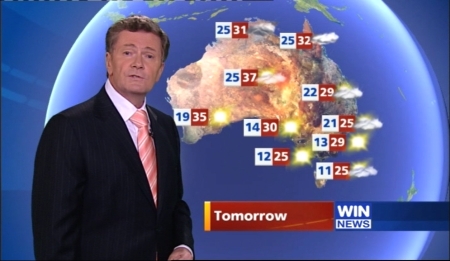 I do have to ponder one thing though. Mark Ferguson was dropped from the weekday bulletins and replaced by Peter Overton whose ratings have dived. Mark was supposed to become the weekend anchor, however Kellie was filling the chair last night. One does have to wonder if Nine are reconsidering their decision in light of Peter’s poor ratings performance?

That WIN station ident is so arrogantly intrusive. And it gets in the way of text and captions. Overseas stations have transparent idents. Why can’t WIN’s/Nine’s be transparent as well.

The WIN logo isn’t too bad as all it is doing is covering a similar Nine logo.

I do agree though that the whole idea of the solid logos is wrong though, and I have no doubt that WIN would have a solid logo regardless of what Nine do as they simply want to cover up the Nine logo.

I think Seven have got it right as their logo is transparent during the news, but becomes a solid logo briefly when it is part of their graphics.

Prime also have the right idea, as they don’t obscure large portions of the screen with a logo, they just have a small watermark in the top right of the screen.

Seven uses a projector, not a TV Sam 🙂

Anyway, generally chromakey is a messy thing, no matter if your using a professional vision switcher or Apple’s Final Cut Studio (saying that, Adobe After Effects has a good chromakey utility from what I have read).

Professional Vision Switchers do have more control on what you are actually keying, but even with a stray bit of hair (depending on the lighting), things can go crazy like you have shown.

Projector? I suppose that would make sense. Either way, it works better as, from a light perspective, something which isn’t quite big enough to completely block out the background will naturally blend in with it.