Last night I came across a rather unfortunate sight in a carpark. A pigeon, with no tail, and seemingly unable to walk, was stranded in the middle of the carpark.

The pigeon, as much of a pest as its species may be, was clearly distraught, and I couldn’t leave it there to face its fate. The poor little thing didn’t really want me to come anywhere near it at first, but eventually allowed me to pick it up (albeit with a failed attempt at escaping later on, resulting in a nasty crash landing).

Eventually, after finding a box for the bird (thanks Nick), and calling the RSPCA, I took the pigeon home for the night and placed a bowl of water and some oats (due to a lack of bird seed) in the box with the it. The RSPCA asked me to bring it in this morning, which I did, and after a quick examination, they determined that it has a pelvic injury, and there is nothing that they can do for it.

As much as I’m sad that the bird will have to be put down, I’m pleased that it will be put down in a humane manner, rather than being left to its own devices to be attacked either by a car or a cat. It is nice to know that the bird’s final moments will be peaceful. 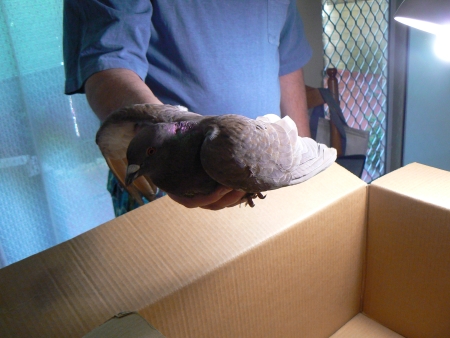 Comments Disabled To "A Pigeon"

Good on you, Samuel.

The pigeons are of much nice and lovely. My Slavcatchski does the amusements from them when he sees of some in Garden near the plantings and does the sometimes of try to do catch but not the always. He has not done catching of yet which is much goodly.

No, it’s not large enough.