I’ve got two Friday Funnies for you this week. Firstly, take a look at the following screenshot of a BBC News story…notice anything? 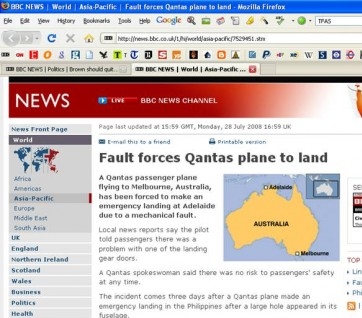 I wonder what how the cricketers will handle the 40°c+ temperatures all day and night at Adelaide Oval during summer?

The BBC have since removed the image, but the folks over at Andrew Bolt’s blog [1] certainly had some fun with it:

I’ve been going through some of my old emails and I’ve found a few Friday Funnies entries which were sent to me but never got on to the website. This one is from Charity of Sydney, although I have to say that I’m quite worried about Charity…nobody seems to have heard from her in about nine months and her family aren’t replying.

1. Your son has a remarkable ability in gathering needed information from his classmates.
(He was caught cheating on a test).

2. Karen is an endless fund of energy and viability.
(The hyperactive monster can’t stay seated for five minutes).

3. Fantastic imagination! Unmatched in his capacity for blending fact with fiction.
(He’s definitely one of the biggest liars I have ever met).

5. Her athletic ability is marvellous. Superior hand-eye coordination.
(The little creep stung me with a rubber band from 15 feet away).

6. Nick thrives on interaction with his peers.
(Your son needs to stop socialising and start working).

7. Your daughter’s greatest asset is her demonstrative public discussions.
(Classroom lawyer! Why is it that every time I explain an assignment she creates a class argument?).

8. John enjoys the thrill of engaging challenges with his peers.
(He’s a bully).

9. An adventurous nature lover who rarely misses opportunities to explore new territory.
(Your daughter was caught skipping school at the fishing pond).

10. I am amazed at her tenacity in retaining her youthful personality.
(She’s so immature that we’ve run out of diapers).

11. Unlike some students who hide their emotion, Charles is very expressive and open.
(He must have written the Whiner’s Guide).

12. I firmly believe that her intellectual and emotional progress would be enhanced through a year’s repetition of her learning environment.
(Regretfully, we believe that she is not ready for high school and must repeat the 6th grade).

13. Her exuberant verbosity is awesome!
(A mouth that never stops yacking).

If you have a joke or a funny video that you’d like to see here on a Friday, send an email to samuel@samuelgordonstewart.com and it might just appear in the coming weeks.