This has appeared in a few JB Hi-Fi catalogues now, the latest of which arrived in my letter box today. 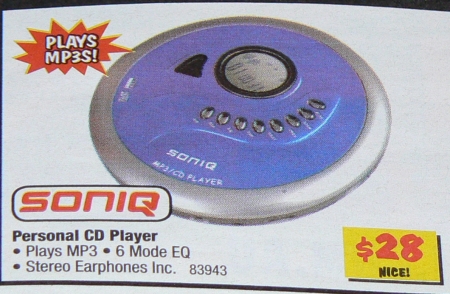 I suppose it depends on your definition of “play”. If by “play” you mean “can hold a CD which has MP3s on it” then yes, I’d consider the advertisement to be accurate. Unfortunately, I don’t consider “impossible to turn on” or “dead on arrival” to be a reasonable definition of “Plays MP3s”, but then again, maybe I was just unlucky and bought a dud unit.

Either way, I didn’t have an opportunity to return to the store for a replacement in the three days after purchasing it, and as I had more pressing matters to attend to, I forgot about it, leaving it sitting in a cupboard which it has now been residing in for about three weeks…and I now don’t believe that a replacement unit or a $28 refund would be worth the hassle of returning to the store with it and arguing about the definition of a reasonable amount of time in which to work out that an item doesn’t work…especially when I’m considering buying an iPod in the next month or so anyway.

It would be more fun to take the CD player apart (in to ten pieces) and post one piece to the JB Hi-Fi head office each weekday for two weeks and see if they send anything back, such as a letter from the confused person who opens each parcel…that would be worth the $28 plus Australia Post charges. I might do that…it sounds like fun. I’ll keep you posted.