Yesterday my copy of The City Chronicle arrived in my letterbox. I’ve been concerned about the seemingly dropping journalistic standards of this weekly paper since its parent company Rural Press merged with Fairfax a bit over a year ago [1]. Unfortunately this week’s front page confirmed my fears. 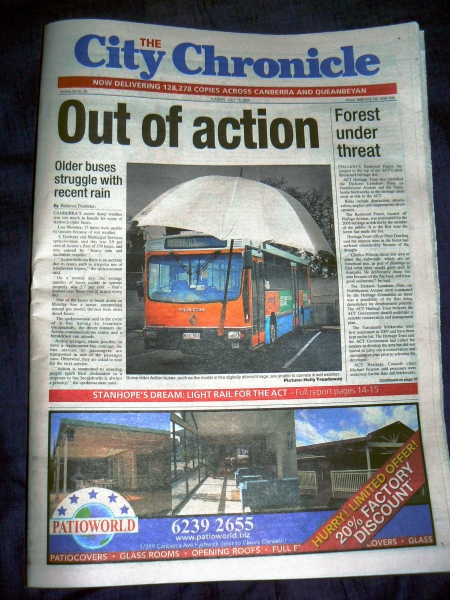 For those of you who aren’t aware, The Chronicle is a free weekly (except for a couple weeks over Christmas) newspaper produced by the people who produce The Canberra Times. It comes in a tabloid format and is delivered to approximately 128,000 households and workplaces across Canberra and Queanbeyan, and read by approximately 178,000 people. Editions of the paper are produced for each region across Canberra and Quenabeyan, with content differing slightly between these editions.

So, back to this week’s front page of The City Chronicle, and the lead story is about older buses in ACTION [3]‘s fleet struggling in wet weather. 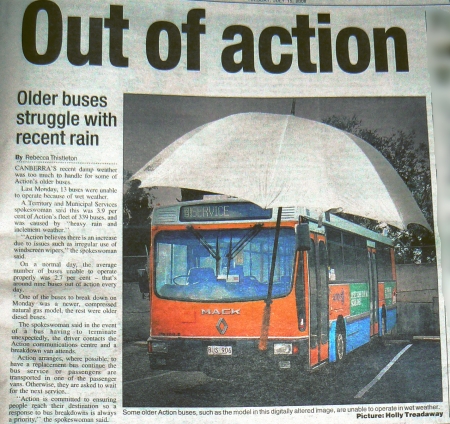 The story comes complete with a digitally altered image of an older bus sitting under an umbrella which seems to be floating in mid-air. The sky has also been altered to be a more menacing colour.

But what about the article itself…surely many many buses must have been off the road for this to warrant the front page of a weekly publication, especially when the story doesn’t relate to a particular region and could theoretically be used on every edition (I’m still checking up on that).

Out of action
Older buses struggle with recent rain

CANBERRA’S recent damp weather was too much to handle for some of Action’s older buses.

Last Monday, 13 buses were unable to operate because of wet weather.

A Territory and Municipal Services spokeswoman said this was 3.9 per cent of Action’s fleet of 339 buses, and was caused by “heavy rain and inclement weather.”

Gosh, so many buses off the road because of the rain…and such an unlucky number too. I wonder what could possibly have caused the buses to have so much trouble in this batch of rain when they didn’t have this much trouble with the last batch of rain?

“Action believes there is an increase due to issues such as the irregular use of windscreen wipers,” the spokeswoman said.

So, thirteen buses mysteriously had their windscreen wipers stop working on one day? Surely Ms. Thistleton thought there was something fishy about that figure and asked some questions about the number of buses which were “unable to operate” on previous rainy days…or was she just being taken for a ride by the good folks at ACTION Public Relations?

On a normal day, the average number of buses unable to operate properly was 2.7 per cent – that’s about nine buses out of action every day.

Last Monday, 13 buses were unable to operate because of wet weather.

Um, doesn’t thirteen minus nine equal four? Does that mean that, in reality, The City Chronicle is running a front page story complete with digitally altered photograph, about four older buses having a windscreen wiper problem? Perhaps…let’s read on and find out.

One of the buses to break down on Monday was a newer, compressed natural gas model, the rest were older diesel models.

So, that’s actually only three more older buses off the road than usual. It’s hardly, as the sub-headline suggests, older buses struggling with recent rain. And it’s not as if there weren’t more important stories in the last week. Pages 14 and 15 contain a double page spread about Jon Stanhope’s ideas for a light rail network…surely a story like that deserves more prominence than a story which can only fill a column if the journalist quotes and paraphrases a TAMS spokeswoman droning on for three paragraphs about standard procedures for when a bus breaks down.

If The Chronicle keeps this up, I’m going to start to think they’ve hired all of the (freely distributed daily News Limited publication in Melbourne, Sydney and Brisbane) MX [5] journalists. The writing and sensationalism is almost as good.

Now, just in case you’re interested in this awful beat-up of a front page lead story, here it is in all its glory…and if you’ll excuse me, I have an email to write to the good folks at Media Watch. 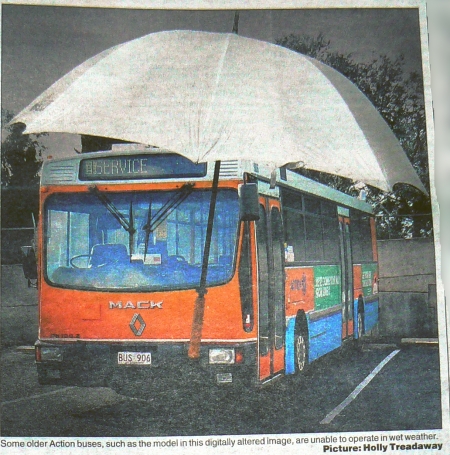