I could turn in to A Current Affair here and claim to have “exclusive, behind the scenes, never before seen by the public, pictures” but to be fair, anybody who has landed on this website in the last few hours by searching Google for:

(and a handful of people have done just that) could have seen it, as the fourth result on Google at the time of writing this is for a page of the new, yet to be released, website.

It’s almost an annual tradition for 2CC to launch a new website, and so often they seem to release a seemingly circa 1995 static HTML website, thankfully this time around it looks like they’re actually using a content management system, and have a dynamic database-driven website which they might actually manage to maintain for more than a couple weeks. I’ve got to say, the new website looks pretty impressive.

At long last they have a “Now, next, later, then” system and some useful information about the station on the homepage. It’s certainly a vast improvement over the current website: 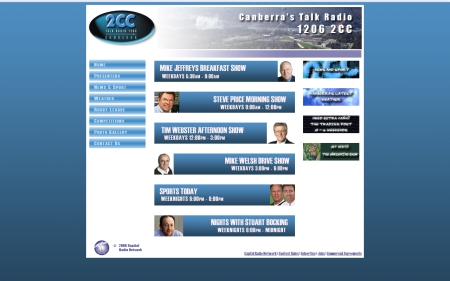 Having had a look around the website, it’s clear that there are a few bits of content that need to be modified before the website can go live, such as open line numbers, email addresses, the fact that you need to prefix text messages with “2cc” etc, but overall the website is quite impressive and seems to suit the image the station is trying to portray.

It’s also good to see that, unlike the current website, 2CC have taken new photos of their staff and are no longer relying on the existing photos which are at least four or five years old.
Each presenter now has a readable page, unlike the previous “one solid block of text each” site, and although it’s not visible within the screenshots, each page has a comprehensive summary of regular guests and segments: 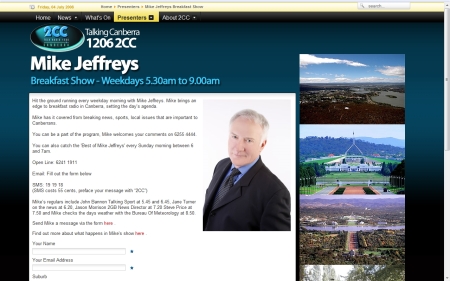 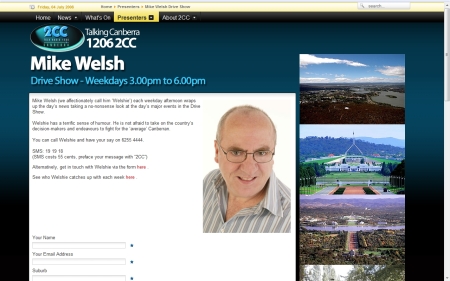 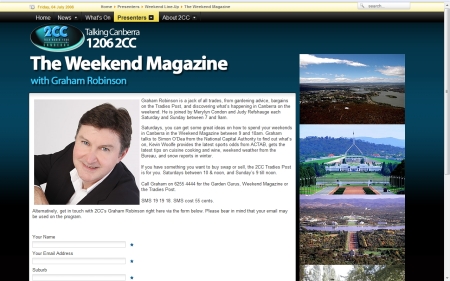 Even the newsroom get their own page (although I do recall an old version of their website containing a picture of James Goodwin when he was their afternoon newsreader). 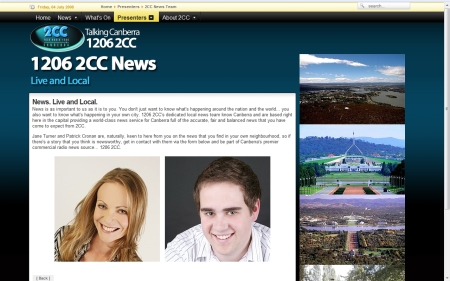 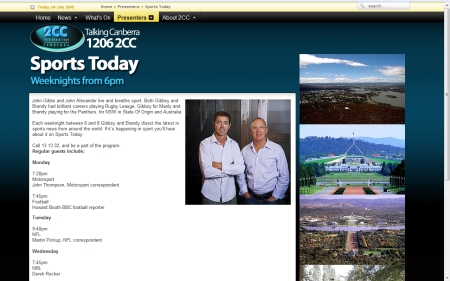 Unfortunately there is no sign of online streaming, so it looks like that’s probably not happening. I have reason to believe that the website will be launched in conjunction with a very noticeable and (I would consider it) major change to the station…unfortunately I’m not allowed to tell you about that just yet (you hear things inside buildings that sometimes you just have to keep secret) but suffice to say, I’m making some recordings for before and after comparison.

When will the new website be launched? Well that’s anyone’s guess. I’m not going to post a link to it in its pre-launch state. If you’re really desperate to have a look, then you already have enough information to find it yourself.

The amusing thing is, whoever is developing the site could very easily have locked access down to a few select IP addresses or password protected it. Even a simple robots.txt file would have stopped Google from indexing it…clearly they weren’t too concerned about “sneak peeks”, which for me at least is probably a good thing, because I’ve been trying to work out what they’re doing with their website for a while now…they haven’t been attempting to update the old one for ages, and the new one explains why. Mystery solved, and my head can go back to working on the 15 million other mysteries I seem to ponder at any given time.

Comments Disabled To "New website on the way for 2CC"

Just checked out the new 2CC website. Looks OK except for the typo on the newsroom page “keen to here from you ” oh, dear Lord…

Speaking of the newsroom – whoever coined the phrase “has a good head for radio” obviously did NOT have Jane or Patrick in mind. Someone please suggest they install a live webcam in the newsroom !!

This topic of newsreaders had me thinking back to the best newsreaders to have graced the Canberra airwaves. The excellent Jane Turner notwithstanding, my two favourites from times gone by for their outstanding clarity and elocution are Laura Tchilinguirian and Andrew Messenger. I don’t know where they are now, but both were brilliant at their craft.