I’ve had a few requests for photos of the car that I crashed last night. As requested… 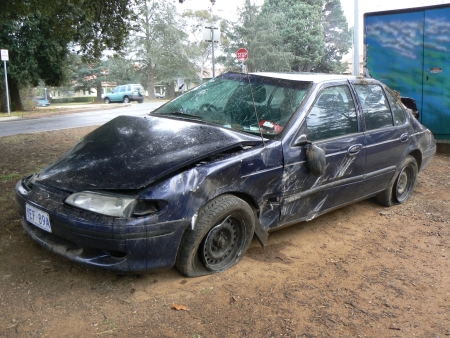 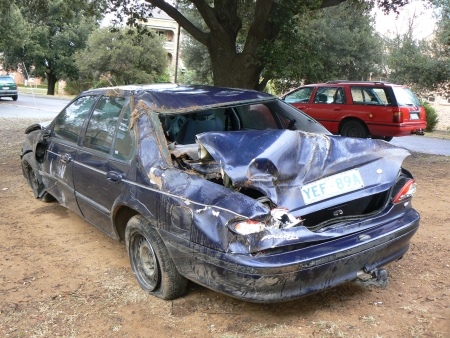 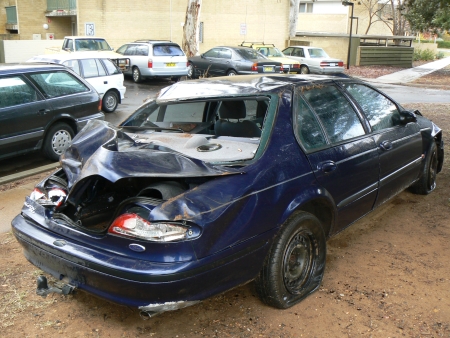 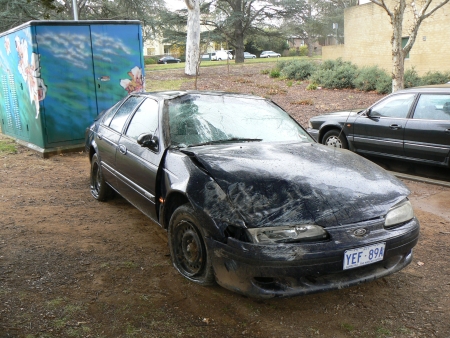 You should enter yourself on [9] as someone to be watched out for.

That probably wouldn’t be of any use…those number plates are going back to the ACT government tomorrow. There’s no point tarnishing the reputation of whoever next ends up with those plates.

And just in case you’re suggesting that I should register my next set of number plates on that site, I’m going to assume that you’re not being serious because that is an absolutely stupid suggestion.

Actually there’s a flaw with that type of website that I haven’t thought of previously. They have no way of knowing if a car is sold. If owner A gets themself mentioned on that site and sells the car the next day, it’s owner B who gets the brunt of the abuse from the site’s compulsive readers.

There was a time when I thought those sites were a good idea, but I was wrong, they’re a menace.

WHy is it a stupid suggestion to warn an innocent law abiding community that a proven bad driver is in their midst?

I guess you had angels watching over you Samuel by the look of those pics.
Glad you are ok, please stay safe.

Bigred, what exactly do you expect to achieve with this?

Suppose for a moment that I put my next set of number plates on that website, how is that going to help anyone? Are they just going to see me and pull over until I’m gone or move in to another lane? Or are they going to try to force me off the road by tailgating me, hurling abuse or otherwise trying to make me feel unwelcome?

And do you subscribe to the theory that it’s impossible for somebody to learn from their mistakes? The Police did not take any action about that crash…why do you feel a need to make me suffer?

I suppose the most amusing thing about all of this is the mental image I have of you driving along with a long list of “proven bad drivers”, comparing every number plate you see to the list. Perhaps you should focus more on the road and less on whether or not the driver next to you recently managed to be listed on some website.

Tony, I suppose so. I’ll try to stay safe. Thanks for your thoughts.

Lemme think a moment here. You are how old? What medication do you take? What are your reflexes like? How long have you been driving? How many cars have you destroyed?

By the way, ACT cops don’t do anything if there isn’t a donut on offer so don’t refer to a non action by them as validation.

The upshot is you drove too fast in the wet and had no idea about how to get out of trouble.

I don’t know why I’m bothering, but anyway…

For your first two questions, do some digging on this website and you’ll find the answers.

My reflexes…I would consider them normal, but I can’t accurately answer your question as I haven’t had them professionally tested.

I’ve been driving for about two years and I’ve almost certainly driven an above average number of kilometres and hours in that time in just about every condition. That crash was my first. I don’t claim to be a perfect driver, and I really don’t know what got in to me on that night. What I do know is that I’ve learnt a number of valuable lessons from it.

I still don’t understand why you want me listed on that website though. I’ve learnt from this, I’m still off the road because I can’t afford another car at this point in time…I probably won’t be back on the road until at least the middle of next week. I’m severely out of pocket, and mildly frustrated by the fact that, due to my own dumb actions, I have temporarily lost the ability to do something I enjoy. Going for random drives to various locations is something that relaxes me quite a bit…not being able to do that lately, and having to rely on other people (be they friends of public transport drivers) to provide motorised transport is frustrating to say the least.

If you’ve been reading this blog for a few weeks you will know that I recently resigned from my job. My annual leave is due to be paid out shortly, and instead of either saving that or using it to take a break for a couple weeks, I have to spend most of it on another car.

If you think I haven’t learnt anything from this incident, then you’re wrong. If you have some other point to make, then I wish that you would stop dancing around the subject and just spit it out.