I was reading through some blogs which I haven’t read for a while last night, and found myself quite bewildered and annoyed by a particular blogger who I shan’t name because, quite frankly, I don’t think they deserve a link after annoying me in this manner.

Basically, the blogger in question is in a lather about how he is going to interview Jackie O, co-host of Channel Ten’s Big Brother and 2DAY FM’s breakfast show, both of which she co-hosts with the annoying Kyle Sandilands. He makes two claims which irritate me, the first of which being that 2DAY FM’s breakfast show is the highest rating breakfast radio programme in Sydney. This is blatently false.

2GB were also the breakfast leader for all eight surveys last year.

The other thing this blogger wrote which annoyed me was a claim that Jackie O is one of the most beautiful women on television. I suppose it doesn’t really annoy me, I just disagree quite strongly. In my opinion, Jackie O tries too hard to look attractive, and I’m not fond of excessive use of makeup to make oneself look attractive. In my opinion, somebody who would truly rank as one of the most beautiful women on television is Channel Nine sport presenter Stephanie Brantz, she also has a great voice. 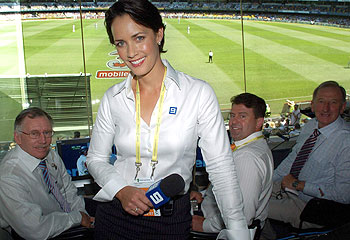 I remember watching Stephanie on SBS World Sport before it was dumped in favour of an extended and revamped news bulletin, and was then very pleased to see her jump across to Channel Nine. It’s a pity that she didn’t get the proper cricket commentary role [4] that she deserved, but it’s good to see her presenting the sport on Nine News on the weekend. She is a great talent and I’m sure she will be one of Australian television’s star commentators in years to come. Maybe the 2012 London Olympics on Nine will be her big break.

She bears a vague resemblance to Australian tennis player Nicole Bradke.
Unfortunately I can’t find a picture of Nicole Bradke anywhere on the internet.

Maybe because you should be looking for Nicole Bradtke.

Didn’t know there was a “t” in her name.

Anyway, I saw Steph Brantz doing the sports on “Sunday” this morning, and I thought she looked much better than the picture you posted Samuel, but I agree, she is most certainly one of the most attractive presenters around, which isn’t surprising because she’s also a professional model.
I’ll post my pic. of Steph later on today, and you’ll probably agree that she looks pretty good in the studio.

The picture I used wasn’t very flattering, I should have used a screengrab of her on Nine News instead, but alas I forgot to record the news before writing this article and had to make do.

I just had a look at [9] John. I think she’s changed her hair since last week.

I think the hairstyle she has now looks better.

I don’t normally watch sports programmes or sports ‘reports’, but I’m prepared to make an exception in Stephanie Brantz’s case.