I’m sorry to bring the mood of Christmas night down a notch, but I have just heard the dreadful news that Jim Angel, semi-retired radio newsreader, has died due to a stroke. 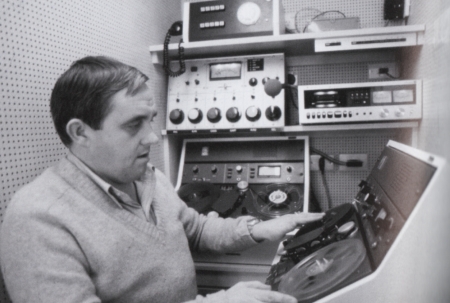 [1]
Jim Angel at 2SM in 1978. Picture courtesy Wayne Mac’s “Don’t Touch That Dial” [2]. According to Wayne, Jim was Sydney’s longest serving radio journalist, working at 2SM, 2UE and 2GB and heard on relay on many regional New South Wales stations from 1964 to 2000.

According to 2UE program director Greg Byrnes who was talking to Clive Robertson about it a short time ago, Jim passed away last night (December 24).

I remember hearing Jim and his remarkable voice reading the news when I was younger, and I remember my high school music teacher commenting on his wonderful voice one morning.

My thoughts and prayers go out to Jim’s family.

It was written on the Southern Cross Syndication schedule for the John Laws Morning Show that John Laws would occasionally crash the news for an important guest. I think Jim Angel could very well be the only newsreader who has had his news bulletin crashed by a presenter, only to become the important guest. Courtesy of Fairfax’s MyTalk [4] website, here is the famous occasion where John Laws crashed the 9:32 news update and got Jim Angel to sing Winchester Cathedral.

Due to this news I am going to make a late change to tonight’s Musicians Of The Week award and dedicate it to the memory of Jim Angel, a man who was more than willing to provide his rendition of “Winchester Cathedral”, a song I think was best performed by Buckingham. Coincidentally I’m fairly certain that this was Jim’s preferred version.

After a couple hours going nuts trying to find a photo of Jim Angel anywhere online, it finally occurred to me that I have Wayne Mac [2]‘s excellent book Don’t Touch That Dial in a book shelf downstairs, and if anything would have a photo of Jim, it would be that book. Sure enough a check of the index and a flick to the pages which mention Jim, and there was a nice big photo of him. Thanks Wayne, I owe you!

It was interesting searching online for the photo. Radioinfo, news.com.au and AAP Image haven’t got one…Jim’s voice, but not his photo, appears on the website of Highland FM [6], a community radio station he has been presenting Breakfast on recently, and Sky News’ website has a picture of John Laws [7].

Rest in peace Jim, and my deepest condolences to your family.

Come now Samuel, the best rendition of Winchester Cathedral is clearly by the New Vaudeville Band. It is their song after all.

I grew up listening to the smooth sounds of Jimmy Angel – I used to get ready for school each morning listening to AJ on 2UE and I’ll never forget Jimmy’s sign off: ‘More news at 8am on 2UE, where you don’t miss a thing.’