Yesterday afternoon Nattie and I went for a walk. As part of that walk we passed a public housing complex primarily for older, retired people. Nattie and I know a few of the people who live in this complex and they are generally nice people, some of them have dogs which, for the most part, Nattie gets on with pretty well.

On this occasion we did not meet any of those people, as we only briefly passed the block, however I did notice something out of the ordinary on one of the patches of grass. I took a closer look and realised that it was an ACT Housing rent payment card which had been dropped. 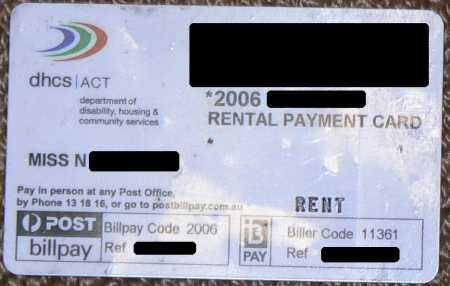 These cards are by no means necessary to pay the rent electronically, however paying in person either at a Canberra Connect shopfront or at an Australia Post outlet is more or less impossible without the card, and in all likelihood the owner of the card will probably not notice it is missing until they next go to pay their rent, which could very easily see them fall behind in the payments.

I picked up the card, and as I didn’t recognise the name and there were no residents outside for me to ask, I made a decision to take the card with me, for the purposes of returning to ACT Housing, who can subsequently return it to its rightful owner. This decision was based on the conclusion that in the area the card was in, the next person to come along and consider picking it up, would most likely not do so for such a noble reason, and the card would probably end up in a bin or some other inappropriate place.

This got me thinking, many cards, be they bank cards, ID cards, membership cards or something else, have a return address on the back in case they are lost or stolen. Often people keep their DVD rental store membership card on their keyring, making the DVD rental store a de facto lost-and-found for keys. In some cases there is no return address, but a few minutes of checking the company name would provide an address.

So would you, if you spotted an ID card, bank card, or other card of some importance to the owner, try to return it to its owner, either directly or via the agency named on the card? I would imagine that there are a number of people who wouldn’t, and if you’re one of them, I would be very interested to find out why you wouldn’t try to return the card.

To the same extent, do you think I have done the right thing by picking up the card and mailing it to ACT Housing?

Comments Disabled To "What would you do?"

Absolutely the right thing to do Samuel!!!
If you had taken the card to a police station or post office, the staff may have been less inclined to find the owner; if not plain indifferent. At least you can be sure that ACT Housing will get the card back to the paying tenant as a good business practice.
By the way, you might want to “black out” the barcode in your photo to protect the identity of the tenant. Code 128 digital alpha-numeric AIDC barcodes are as easy to read as Harry Potter books.
Keep up the good work on the streets. If I ever lose my wallet, I want YOU to find it!

I wouldn’t return it.

I would cut it up and throw it away.

Put yourself in the shoes of a person who lost a bankcard or credit card. The first thing you’d do would be to call up the bank and cancel those cards and get new ones. So even if they do receive the card back it would probably be too late, after they had recieved a new one.

Keys, on the other hand, I would make an effort to return.

If it was a wallet with money inside, and an address was also provided, I would take out the money required for postage and then send the wallet back to the person.

Good point about the barcode…I’ll have to fix that up tonight.

Even with a credit card I’d be tempted to return it to the issuing bank. They may very well destroy it, but I’m sure they’d appreciate having the fact that it was found on their records.