Listeners to any of Southern Cross Broadcasting’s talk radio stations and viewers of any of their television stations would by now be aware of the “MyTalk [1]” website, a hub for news, discussions, and the websites of their TV and radio stations.

All of the talk stations now have a live video webcam which is clearly still having the bugs ironed out of it. From the 2UE webcam, Paul Makin this morning (not actually on air at the time as the red light (little black thing under the monitor he is looking at) is not on): Viewers of Southern Cross television stations would probably have seen the ad for MyTalk featuring John Laws by now. It mainly consists of Lawsie signing off from his show by saying “that’s all we have time for” (has he ever actually said that on-air?) and then explaining that there is only a limited amount of time on the air, but there is all the time in the world to discuss whatever you want on MyTalk, and if you sign up or update your details before May 11 you could win $100,000. The terms and conditions [2] have me a bit concerned though.

6. Inaudible, incomprehensible and illegible entries will be deemed invalid.

Well, that makes all of the entries invalid, as you can’t record your entry audibly for them. It’s a standard web form, and the last time I checked, it didn’t speak.

Also peculiar is the fact that the MyTalk television commercial omits any mention of the digital television version of MyTalk. For some peculiar reason it is also available as a “datacast” station with the latest news headlines, local and nearby weather and a few other bits and bobs (which this morning contained a short looped show of some bloke talking about pets in the State Focus studio). 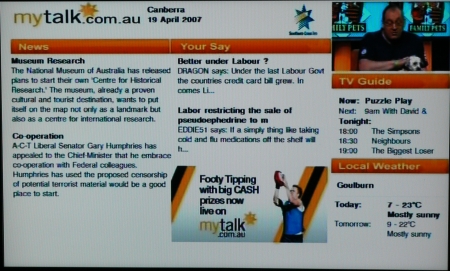 If the digital television version of datacasting is using up the bandwidth of a standard television service to display a screen with a bit of writing and a couple pictures, which can’t be manipulated by the viewer in any way, then I say bring back teletext! Actually I think Seven’s digital broadcasts still have proper teletext, but only some set top boxes support it. I’ll have to find that spare set top box and see if there are any teletext services associated with MyTalk. I know the local station, Southern Cross Ten, were running a test teletext service on their analogue station a couple years back, so it’s certainly not impossible.

MyTalk datacasting runs on channel 55 in most areas, and either 66, 77 or 99 in others. Of course if you don’t have a Southern Cross station in your area, then you don’t get their datacasting. They have a list of places and stations here [4].

It’s good to see traditional broadcasters making a genuine effort at getting in to the online arena, and MyTalk is fairly impressive and will probably prod 2GB to expand their offerings, and push the ABC to finally become serious about having two-way discussions rather than guestbooks. I’m a bit skeptical about the point of having the digital television version of MyTalk, but it’s a start and I’ll give it some time to develop. These things always seem to take someone to take a risk and launch something new and bold, and much to my surprise, it looks like Southern Cross Broadcasting have paved the way. Now we just have to wait and see what the others do.

Comments Disabled To "MyTalk and The Radio Webcams"

I think you will find at least for the 2UE one everything is working except for Stuart Bocking.

I noticed when I was having a look at Sports Today tonight there girl who was controlling things actually had control of the webcam….so I just wonder if Stuart isn’t turning it on on purpose!

Also it does skip a bit of me at times but it’s a wonderful idea.

They have a few controls on the desk…trouble is every time they hit a button the angle or camera changes so it’s a bit hard to work out what control they have.

When the webcams were first in operation, one of the 3AW announcers was playing with the zoom and had some props in the room for the benefit of his international audience…some of them were ringing in and they got their names written in big writing on paper and stuck on to one of the props.

I think the station logo is displayed when none of the the cameras are on, which seems to be happening quite a bit during the news, although that camera has been pointing at the ceiling for the last couple of days, and about a week ago I noticed Steve Blanda obscuring the camera with a stack of papers.

I thought that when john Howard came to Maitland I was quite cranky that he went to the grammer school isnt our public schools good enough for him in our area . well do something about it and fix the schools . What message does it send to the people of maitland only rich peoples children are important . Also He said their would be no funding for Energy Australia Staduim because the money had to go to the freeway well thats not good enough gosford has has major road works of the last and a new staduim why are we different . the money was there for the freeway before but they spent it . The Newcastle Knights have been good for nsw they get the crowds and the fans pay good money to see them we all deserve a new staduim. Instead of pay rises to the pms they should all take a cut in wages they say we should tighten our belts but the they get a pay rise that they dont even need the money . Our After Hours GP Service at Maitland hospital has to use rooms that are for day specialist appointments by day and after hours GP at night we need our own rooms that are at the entrance of the hospital we have to walk half way through the hospital to get to AGP which is a huge risk to patients in the hospital and is not fair on the doctors who work in the AGP Give Maitland Money.
We also need our Maitland sports stadium upgraded kurri has a beautiful sports statium like a lot of other places why is MAITLAND being overlooked JOHN HOWARD WAKE UP TO YOUR SELF LABOUR ONLY JUST WON THE LABOUR SEAT FOR MAITLAND BY A THREAD AND LIBERAL DID NOT GET A LOOK IN WE ARE SICK AND OF BEING THE FORGOOTEN TOWN
CHEERS ANNE FROM RUTHERFORD

Just to clear up any confusion Anne, this is not the MyTalk website. I welcome you all the same and thank you for your thoughts about Maitland, although it really does have nothing to do with the topic at hand.

If anything, your comment would be better off as a Letter To The Editor, which would give it prominence on the front page of this website.