Another shakeup is in progress. 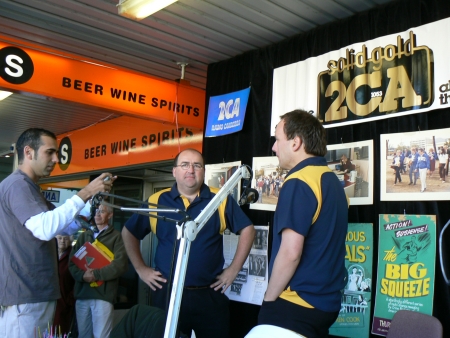 Morning presenter Simon Pulis (holding the camera to the left of the photo above) is entering his final week with the station, he will be replaced next year by ex Mix 104.9 Darwin announcer/music director Gerry Nyein (don’t ask me how to pronounce it…I think voiceover man Ron E. Sparks will also need guidance on that one). Oddly enough, Mix 104.9 is a John Laws network station, and Gerry will be competing with Laws as 2CA’s morning presenter.

Apparently, Simon Pulis is moving back to Sydney, he isn’t the first person from Capital Radio to do that this year, as newsreader James Creegan did the same thing.

The rest of the movements involve breakfast boys Paul Blunt and Leighton Archer. 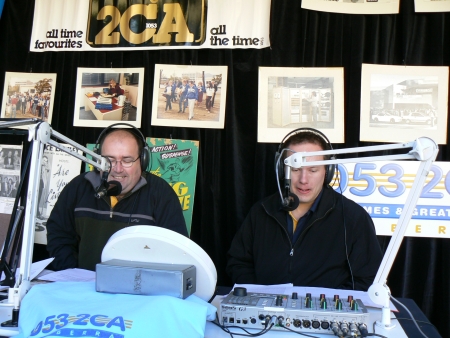 Leighton (on the right) has taken over as 2CA’s program director from Drive presenter and music director Gregg Easton. For Capital Radio, PD and MD have both been juggled positions…in other words, you juggle your on-air and off-air roles, so the following job advertisement should make it pretty clear what else is happening.

# Don’t mind early starts and can target a 40+ audience.
# Have a bubbly, positive personality and are passionate about making great radio.
# Are a team player and have great research skills.
# Can come up with creative ideas and content for the show every day.
# Don’t mind living in a great city with more restaurants per capita than any other…

# Will pay you very well
# Give you a great Co-Host in return
# Create fantastic promotions for you to work with.
# And supply you with an endless supply of coffee. (We do brewed here)

2CA has a new boss, a new PD and an exciting new direction!
If you’re keen to join a fresh team that will make great radio in 2007 and beyond, then don’t waste any time, just send your resume and an air-check ASAP using the link below or post it to;

Apply for this job via email now [3]

I think it’s pretty clear that Paul Blunt is leaving the station…I don’t know where he’s going, but I’ll miss him. Best of luck Paul!

Comments Disabled To "Meanwhile at 2CA…"

Any news yet on the 2007 breakfast team? Words is that they have had “loads of applications”.

And I note that Gregg Easton has “left to pursue other interests”. Who is the tip to replace him?