I’m getting glasses, and for some reason this is all very exciting. Here is the prescription written by my wonderful optometrist Mark Feltham. 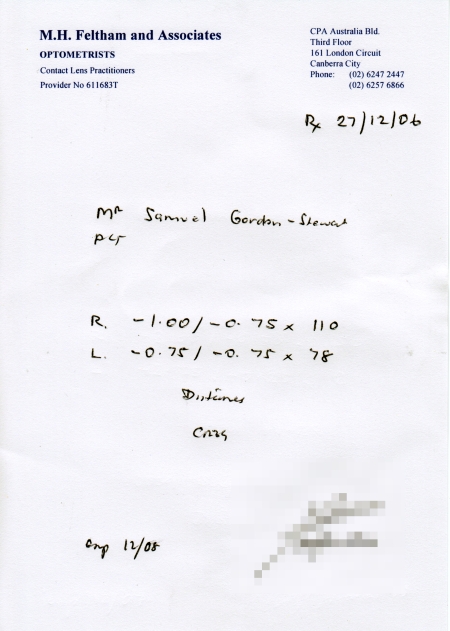 For obvious reasons I have removed Mark’s signature.

During the consultation I was able to read the bottom line of text, but I had difficulty working out whether a letter was a “w” or an “m” when I didn’t have any assistance.

It was funny the way Dr. Feltham made the announcement that I had been semi-expecting that I need glasses. It seemed like another test with his machines, asking if what I was seeing was blurrier or sharper, and then when we settled on the clearest picture he said “that’s what your new glasses will be” (I’m paraphrasing).

While I was coming home I was feeling quite overjoyed at the prospect of getting glasses, and at the same time trying to work out whether that is the right reaction to getting glasses. As it happens, I’ve been thinking that I would need them for most of the year, so in many ways being overjoyed is the perfect reaction!

If I get paid tomorrow (I’m not entirely sure what is happening with pay this week) then I will be visiting the glasses shop in Bailey’s Corner (on the recommendation of my optometrist) to see about getting these new glasses.

For the record, I’ve been seeing Dr. Feltham since 1995 when my general practitioner of the time, Dr. Mitar Milosevic, referred me to him. At that stage, Dr. Fletham’s practice was on the bottom floor of the Canberra Centre where Hot Dollar currently resides. This is the first year in quite a few that I haven’t seen him before Christmas, usually I have seen him on Christmas eve, but that was a Sunday this year, so the tradition has moved and I will now be seeing him just after Christmas for the forseeable future.

Will you get wire rims or a ‘Clark Kent’ type frame ?

I don’t know yet, that’s something I’ll decide when I see the frames.

Swimming goggles are very annoying, they feel like they are trying to suck my eyes out. Thankfully I don’t swim much.

And welcome back Clayton, it’s been a while, I hope you are well.

All is well thank-you Samuel. Just rather busy as of late.

That’s good to hear Clayton. As for being busy, well, aren’t we all?