By request, here is the “card” I faxed to John Stanley on Wednesday to congratulate him on his wedding. John spent the first few days of the week in Melbourne with his new wife on a Melbourne Cup honeymoon. John and his wife will take an overseas holiday as a second honeymoon later in the year. 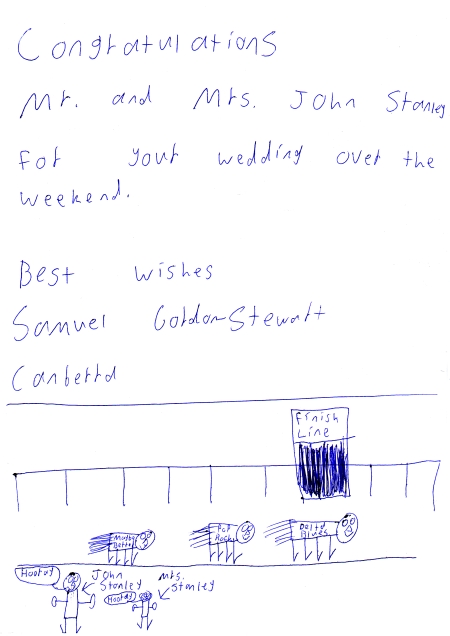 Classic classic Samuel. We certainly need more of your art donning the walls of house and blogs.

Can you do a picture of Alan Jones’ horse winning the cocks plate including Alan in his pink silk tie with matching hankerchief?

Do those horses that I might add eerily resemble HP Lovecraft’s creatures on page six of the Necronomicon, have fire crackers strategically placed in their bottoms?

I was kind of hoping you would use your “Faber-Castle rendering technique” as described by Wonko The Sane.

Great drawing Sam. I didn’t realise how much I was missing towngold dolgnwot series. Any chance of a return?

Nice observation Roger. The horses’ legs appear to be immobile, as if grazing, yet they are mysteriously levitating a few inches above the turf. I wouldn’t be surprised if Lovecraft had something to do with it.

Mr and Mrs Stanely have a very good vantage point for the race, too.

Other things I miss that have fallen by the wayside at SGS.com

Yes, Colonel, and from my recollection, it was a photo finish, and there were jockeys on the horses.

I am also almost certain there were a few other people with Mr and Mrs Stanley watching the race at Flemington.

I also note that all the hose and humans are on their heels … I will need to check Wikipedia, but as far as I know horses don’t have heels.

Meanwhile, we are yet to verify the new Mrs Stanley’s idenity … it would be nice to put a name to the face Samuel has given us.

Aside from that, a stunning and thought provoking art work – if you click on it you get a hi-res print version, which I think is a very nice touch.

Oh, and Samuel, I think a referral to a marriage guidance counselling service would be appropriate here, abd perhaps the RSPCA.

On further reflection, I now have serious doubts the animals depicted in this drawing are in fact horses. For a start, there are only three and not four, so we can rule out any apocalypse action for the time being. But I am a little troubled by their pale, pupil-less eyes and savage, parrot-like beaks. I’m not so sure, Loki, that those are heels the horses are walking on. They look to be more like insectoid talons.

Note also the stiff probesci protruding from the hindsection of each levitating beast. Could they be poisonous barbs? A sweet mucus-covered appendage designed to attract prey?

I for one cannot imagine a terrfying spectacle than a whole legion of these monsters gliding, stiff and regarding all with an eyeless gaze, like so many dread hotair balloons.

Did they issue forth from the black cavern in the top right of the page? What other nameless horrors lurk in those putrescent depths? Is it a portal to Reid? A passageway into the mind of a former contributor with a dislike of licking cats?

I can’t say… but Mr and Mrs Stanley, now I look again, seem to be rooted to the spot, feet upturned in a rigor mortis grip of terror.

I hope they escape the scene of this devastation. Can anyone else shed some light on this largely unreported incident at the Cup?

You have a far more vivid imagination than I, Colonel. I just thought it was a very nice drawing with some odd factual inaccuracies, which could be put down to artistic interpretation.

I do have to ask though, when you click on the image you get a life size print.

Where did Samuel find a fax machine that big?

True, Loki, I have an overactive imagination, and I have also been drinking on the job.

Are the figures in the picture drawn to scale? If we assumed Mrs Stanely is, say, 170cm tall, that would make Mr Stanley over 300cm and the strange animals more than 5 metres long (incl. proboscii).

I would imagine they would eat a fair amount of prey. I wonder what manner of sustenence can be foraged in the cavern?

I will get a friend who lives at Flemington to duck down to the course to measure the height of the inside guard rail so I can take some more precise measurements.

Looking at the horses, Like John Stanley, they have round heads and no ears, whereas Mrs Stanley seems to have ears.

And like the place getters, the outside rail of the track seems to be levitating, although I don’t think there is any sinister purpose in this depiction.

I would have liked to have seen at least Alan Jones in the crowd.