I did say that all plans to cover the opening of the Canberra Centre Expansion had been cancelled…and they were, until yesterday evening when I took Nattie for a walk around the shopping centre and saw more tradesmen than at any other time during the construction of the place, all working towards making the outside of the building presentable. (Hello to the person who stopped me to say hello and make a nice comment about this website).

Ultimately the Canberra Centre is still a construction site with a public walkway in the middle, there are a couple stores open, Big W and Supabarn the main attractions, but most of the stores don’t look like opening for another few days. My sources indicate that parking will remain a fiasco until Monday when the new parking is officially opened. 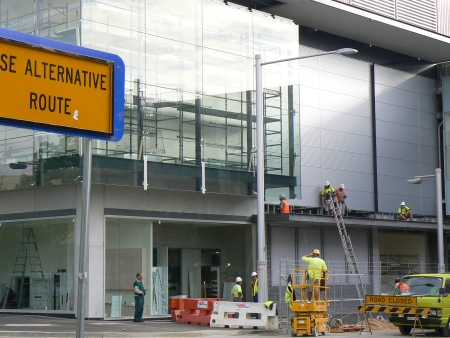 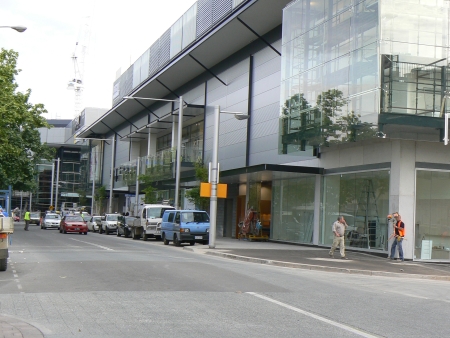 The section of the carpark which has been turned into a shopping area is still to be completed, and to my horror appears to be open to the public to walk through. From upstairs it looked like the lights were off, so I didn’t venture down there, but I couldn’t see any barriers. 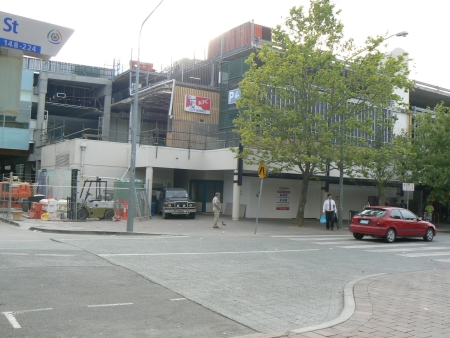 Further down Bunda Street is the front door of the “fresh food” (and general retail) section of the expansion, with signs around it to ensure that people know which door to go through and don’t dismiss the building as a construction site. 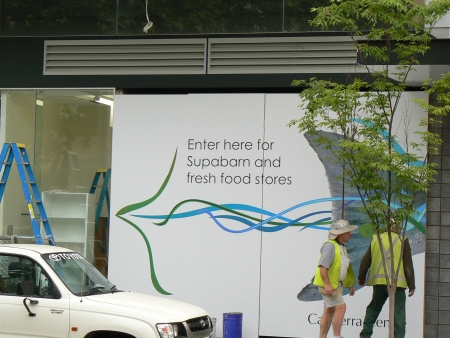 Precinct B opens in a couple weeks…but seems to be partially publicly accessible from the first floor of the “fresh food” area. 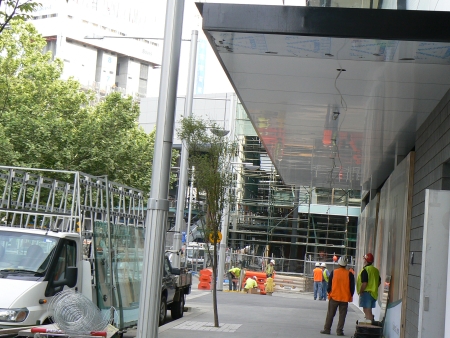 I then walked into the shopping centre and took some photos…I was starting to wonder how long it would be until Canberra Centre Marketing, who seem to specialise in giving Internet publications the run-around these days, would ask me to stop.

Supabarn is one of the few stores that seems to be openable…and they had no intention of waiting until any official opening. 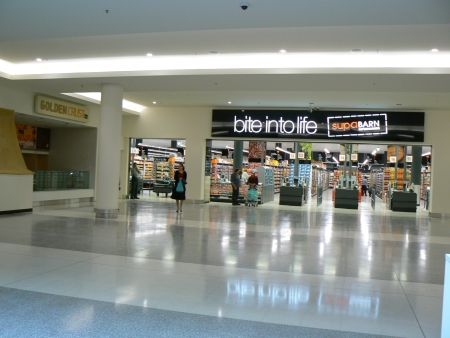 Looking back towards the existing Canberra Centre and Healthy Life looks like it might open today, the chemist will open today (funny version of the corner of Petrie and Bunda Streets…looks like the old transformer/substation/corner store area will become an entrance into a new shopping precinct in the old Supabarn site after all). The fruit shop is a mess at the moment, and will probably open in a few days. Price Attack might open today, but they are still moving stock, so I doubt it. 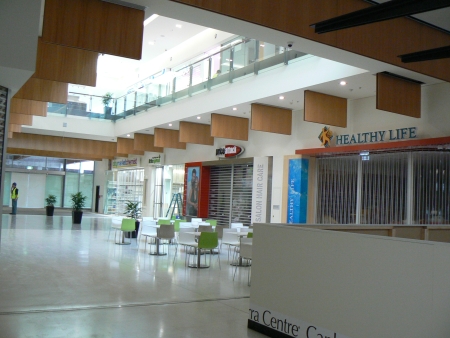 It was around this time that a friendly security guard came up and gave me the expected news that “you can’t take photos in here unless you have clearance from Marketing…the stores are worried about the copyright of their store designs”…which, based on what I saw later on makes me think that traditional media have been given clearance to take pictures of anything which looks like an actual open and operating shopping centre, and not a construction site. The security guard, probably knowing that his official line was nonsense, was more than happy to tell me that photos from outside are acceptable…and there is nothing the Canberra Centre can do about them. He also didn’t ask me to delete any photos!

Up the other end of the lower floor is what looks like a full newsagent which will open today, JB Hi-Fi and Ted’s Cameras which may open today, and fresh food stores which probably won’t open for a few days (Chicken, Butcher, Fish etc). There is a lift at this end…not sure if it’s wring or not.

Upstairs Big W were having fun with a tiny crowd, over excited staff, a lunatic with a big bell trying to get everyone to yell out “B-I-G-W-Big W”, one camera crew with no obvious station markings (CC press release video perhaps?) and a person which didn’t look like a Canberra Times Journalist but was the closest thing to one by being allowed to hold a camera.

I had a little look around Big W which is about half the size of the Woden store (I tried to get an answer about the size but could only get staff saying “I haven’t seen Woden”) and, as it was approaching five past eight, decided I should get out into the main shopping centre for my pre-arranged phone call to 2CC’s Mike Jeffreys…on the way out I managed to set off the Big W theft detector for the first time ever and had to pull everything out of my bag…it turned out that a half-used packet of batteries I bought from Woolworths in Dickson was the culprit, and I was allowed to go on my way. Thankfully Mike’s interview went overtime and I had a few more minutes to find somewhere mildly quiet…but there was nowhere, so I just walked around the shopping centre and continued to do so while chatting with Mike. The conversation with Mike concluded moments before the angle-grinding started (thankfully).

I still can’t understand why the shopping centre expansion was opened today, the vast majority of stores are not finished, the public seem to be able to wander through construction sites, and they couldn’t even arrange for a dignitary to attend. As I said to Mike…unless you are desperate for a $50 34cm CRT television from Big W…wait a couple weeks before attending.

I did manage to get a few other photos before going to work. 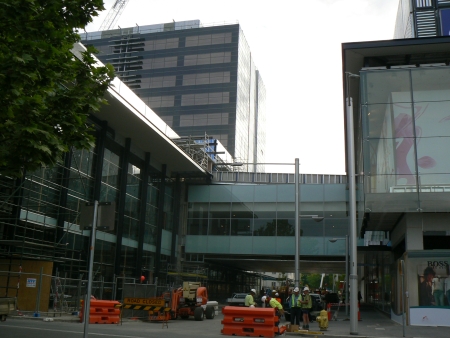 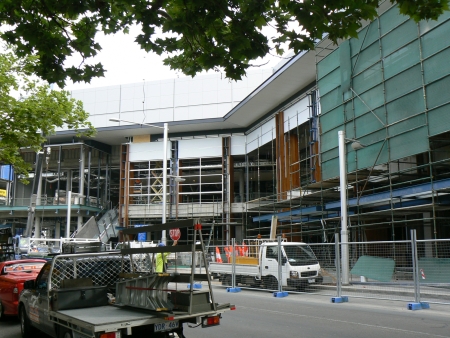 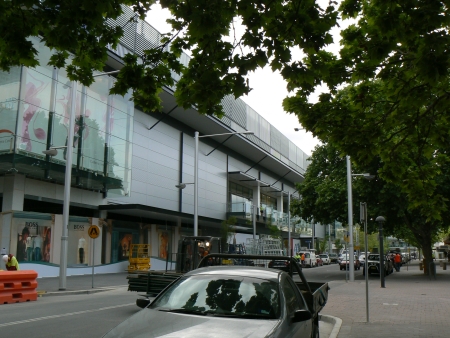 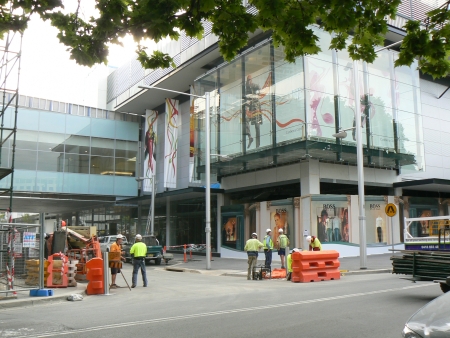 By the way, the old city markets is closed, I may try to get a photo of it at some stage later today or tomorrow, as long as security or marketing aren’t too precious about it.

Comments Disabled To "Canberra Centre Expansion Opens With A Fizz"

Those damn security guards ! Most of them act like mini Hitlers.

This one was very nice…most of them tend to be nice as long as you don’t become aggressive.

oooh looks all modern and shiny

The finished bits do look very nice and I’m sure it will be impressive when they have everything open. I’m starting to think that I should have persued press access as there were plenty of good photo opportunities.

I’ve been informed by Canberra Centre Marketing that there will be an official opening in December, which more or less confirms two theories…one being that the Canberra Centre didn’t want a huge press turnout showing pictures (and noises) of a construction site, and the other being that they opened this far ahead of completion to give Canberrans enough time to venture into the city again before the christmas rush.

I’ve also managed to confirm that parking is open in the new area, but is free at the moment due to systems not being online. Car Park staff are scheduled to move in to the new section on Monday, so the free parking won’t last for long…and might not even last all week.

I should point out that I will most likely persue press access for the official opening as I would like to think that I could have a more positive story by then…hopefully the shopping centre will be much more presentable by then…and I won’t have to rush off to work as quickly as I did today. I think I scurried off to work only a few minutes after getting off the phone with Mike Jeffreys (I forgot to record it…Media Monitors want nearly $200 for it…and I’m seriously considering paying for it because I want to see how my ad-lib reporting went).

I haven’t had a chance to check out the new Supabarn yet, but I’ve heard that it is much bigger than the old Supabarn…the receipt paper is slightly wider too!

I just wonder if any Black & Gold products will be stocked.

One can only hope they get all the details on the receipts right, which will save us all a lot of work!

If only Editorial Echoes was still around. Pirate versions can be downloaded from Limewire I hear.