2CC gardening host David Young is calling it quits…only 4 months after his ABC competitor Mark Carmody did the same thing [1].

This weekend coming (August 19 & 20) will be David’s last on 2CC. The stalwart of Canberra horticulture made the announcement during his show on Sunday August 13, after a decade (or thereabouts…I can’t remember if he started in 1997 or 1996…it was probably 1996) on 2CC, and a 12 year stint on ABC Local Radio before that. David was also the gardening reporter for Ten Capital News (the TV station now known as Southern Cross Ten). David is well known for hosting garden tour/holidays to many places around Australia and the world. David is also the bearer of a Churchill fellowship and an Order of Australia Medal.

Unfortunately, the only photo I can find of David is a tiny outdated photo from one of his tours. 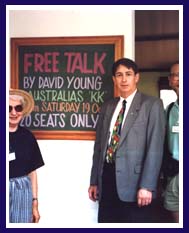 If anybody has a more up-to-date or better photo, could you please send me a copy…I’m happy to give you attribution for the photo if you like. (I suppose I should have gone with the camera to see David at the retirement expo last year).

I’ve had a delve into my (not very comprehensive!) archives, and found a gem [2] from 1997…it is the Sunday outro for David Young’s Garden. This uses what I consider to be the best theme music 2CC have ever used for David Young, and unfortunately I neither know the name of the music, or possess a complete version of it.

The outro runs for nearly 30 seconds, and can be played or downloaded by clicking here [2].

I will be sure to give David a call on the weekend to wish him all the best for the future…I’ll also get the recorder going just in case 2CC’s current longest serving presenter receives a tribute or gives a speech of some sort…somehow I think his last two shows will be filled with callers wishing him well. I know that I will miss him, he has been the relaxing voice of the weekend for me for many years, his “thing” is the inspiration for the Persiflage Puzzle…I think a lot of people will miss him, he would have to be one of the longest continuously serving people in Canberra Radio at the moment, and this is truly a very historic moment.

Mike Frame and Vicky (whoops…I heard her last name once…but she is usually just called “Vicky”) will fill-in for the rest of the ratings period, but after that, who knows? (Endless re-runs of David’s years on 2CC perhaps?, Mike and Vicky forever more? Some other show??? The possibilities are endless.)

“his “thing” is the inspiration for the Persiflage Puzzle”

Wow, Samuel, that is where you got the idea from.

Could you explain more about David’s “thing”? Does he have a different name for it?

What did they call it in Seinfeld? Was it “It”?