It has come to my attention (thanks to Mike Jeffreys for bringing it to my attention…it nearly slipped passed me) that Moose, the first dog to play Eddie on the television show Frasier, passed away on June 22 aged 15 and a half human years (108 and a half dog years).

Wikipedia has the following biographical information [1] about Moose

Moose (December 24, 1990 – June 22, 2006) was a veteran canine actor. He was a Jack Russell Terrier and is most famous for his performances as Eddie Crane on the television sitcom Frasier.

Moose was born on Christmas Eve, 1990 in Florida, United States, the youngest littermate. He was the largest puppy in the litter. Like Pal, the original Lassie, the obstreperous puppy was too much for his original owner. According to an article by Lori Golden:

“In fact, chasing cats was one of the activities that led to this troubled terrier becoming one of TV’s most precious pooches. Originally owned by a Florida family, Moose was too hard to handle. He couldn’t be house trained; he chewed everything; he dug and barked a lot; and he was constantly escaping and climbing trees. Eventually given to the Florida manager of Birds and Animals Unlimited, a company that trains animals for TV and motion pictures, Moose was put on a plane at 2½ years old and sent to Mathilde de Cagny, an LA trainer working for the show-biz animal company.”

DeCagny has been quoted as saying that Moose was very highly trainable and won the role on Frasier after only six months of training. Moose had the ability to fix Kelsey Grammer with a long hard stare; this became a running sight gag on the show.

The longevity of Frasier necessitated the breeding of puppies as possible replacements for Moose. A daughter, Miko, was considered but never grew large enough (she was given to a technician); a son, Moosie, now lives with Peri Gilpin. Moose’s son Enzo was a closer match and turned out to have unusually similar facial markings; later in the series he was used as a stunt double to perform the more physically challenging tricks for his aging sire. Enzo took over the role after eight years.

Moose and Enzo also appeared with Frankie Muniz in the 2000 feature film My Dog Skip.

Moose has numerous television appearances and several magazine covers to his credit. There is an official Moose calendar and an ‘autobiography’, My Life as a Dog.

Moose spent the last 6½ years of his life in retirement in West Los Angeles with son Enzo, Mathilde DeCagny (their trainer), her husband Michael Halberg and Jill, the dog from As Good as it Gets. He passed away due to old age at home at the age of 15 1/2 years on June 22, 2006.

Moose will of course live on in the hearts of many millions of Frasier fans around the world, and in the endless reruns of the fantastic television program of which he was a part.

This has been difficult to write as I have burst into tears three times whilst thinking about what I could write about Moose and choosing a picture to place in this article. Whilst I never met him in person, he certainly appeared to be a loveable little doggy, a very talented actor, and one of the most reognisable furry faces on television. I am very sad to hear that Moose has passed away, although I must say that he had a very long and priviliged life, and it is lovely to know that he passed away of old age, and not of a medical condition.

I think it is only appropriate that Moose receive the prestigious Samuel Salute. Moose is a dog I will miss dearly, as I grew up with him, and despite the fact he lived on the other side of the world, he felt like family. 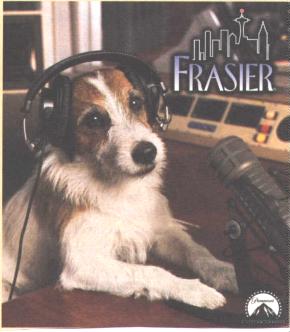 May you rest in peace Moose.

You will not be forgotten.